What is reddit's opinion of 24 Volt Transformer, C-Wire Power Adapter for Nest Honeywell Emerson Sensi, Nest Hello Skybell Smart WiFi Thermostat and Doorbell Power, 25 ft Cable by Fyve Global?
From 3.5 billion comments
As an Amazon Associate I earn from qualifying purchases. The following content includes affiliate links for which I may make a small commission at no extra cost to you should you make a purchase. 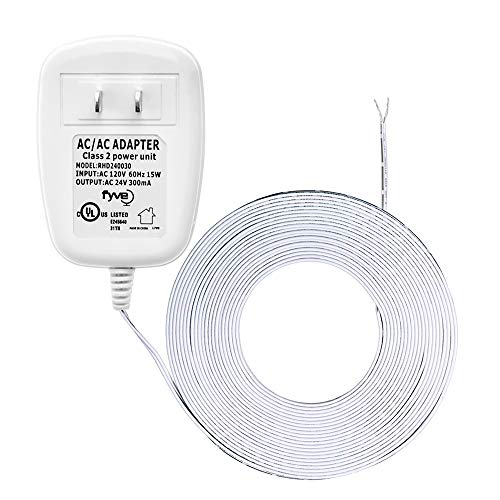 This product was mentioned in 32 comments, with an average of 1.22 upvotes

You need the C wire to power the thermostat.

You can buy an external C wire power supply, but, for those, you need to plug it in someplace close to the thermostat. Here is an example of what they look like [link] It really depends on your setup, and where the power source is, you could run it through the wall like the other wires as well.

You can also use the C wire adapter that Wyze gives you, and run a C wire to the thermostat.

I haven't used these kits but I'm hesitant. They work by siphoning power from the other wires. This could damage the control board.

If you want to do this, is an easy diy job.

If I were you though, I'd probably just buy a small 24VAC transformer of of Amazon and make your own c-wire that way.

Here is an example: [link]

I think I found a solution here: 24v plug-in transformer

Luckily I’ve got a hidden outlet that I could use and wire in such a way that there aren’t cords hanging around.

I wouldn't go with the outside outlet. Not only is the power adapter not outdoor rated, but someone could just unplug your camera if they wanted to cut your feed.

I did something similar to your second idea. I replaced an old wired doorbell that died so I already had a cavity inside my wall behind and below the doorbell. So I took the floor moulding off the wall from the opposing interior wall where I have an inside wall outlet in a similar position to yours. I ran the power adapter cable in the wall, down to a small hole that I carved out in the drywall that is hidden by the moulding. Grabbed the wire and ran it along the bottom of the wall.. again behind where the moulding would cover... All the way to right under the outlet where I came up and plugged in.

I affixed the cable every foot or so as to avoid the cable moving or getting tugged somehow. Lastly I put the moulding back on and put a fresh bead of caulking.

Also, I bought a power adapter from Amazon instead of the one at the Google Store and saved some cash. [link]

I am thinking about getting IDE 2.0 installed and I live in Chicago. I was reading a lot about it. Plan to use it with Nest and set cycle to 1(once) every hour. I read somewhere that people have problems with nest because everytime it tap into power to get itself recharged) system would start over again instead of slowly working its way up to the desired temperature. This way it doesn't reach capacity to sweat the coil and it is not removing humidity. But what if I would power Nest with power adapter independently of the heat pump? Did anyone tried that? I am not using schedules on Nest regardless, and not planning to just a ability to set the temp with phone and maybe home/away feature. There is a link below for the adapter. What do you guys think? [link]

Rc and C to a 24v transformer (like this: [link]), Red wire to Rh and White wire to W2, then tell the ecobee that W1 is also connected even though it doesn't exist. Works a charm. Thank you /u/strange_brew_racing!

A lot of these comments are good solutions. If it turns out that the green is not the Common, if there is an electrical socket nearby you can always order something like this and connect the wires to C and Rc

I ended with an Ecobee, so we just placed the thermostat downstairs closer to the furnace and added a couple of sensors rather than running extra wires.

W is heat & Y is cooling. In order for the nest thermostat, or any digital thermostat other than replaceable alkaline battery powered thermostats, to operate you will need a Red (R, RH, or RC) wire and a C wire is recommended but not required by nest anymore. I did a quick Google search and found a wall adapter that says it will power the thermostat with the R and C slots on the thermostat. [link] Keep in mind that if you do this, if your system has issues the thermostat more than likely won’t know at all there is any issues since it’ll be receiving power as long as the plug is plugged in.

I didn't have a c wire at my thermostat, so I bought an adapter on Amazon for around $16. It simply plugs into a nearby outlet.

The one I used is [link]

It comes with installation instructions which are available on the Amazon page. There's also YouTube videos.

/u/DrkMith Your post is super clear, and incredibly helpful. Yes, I do run the fan on occasion for circulation. That add-a-wire device seems like magic; very cool and handy and seems like my best option. I watched the video, it's within my capabilities I believe. If you've installed them before, any advice or watchouts?

One other note, if all I need is the C wire to the nest to get the setup to work, could I instead use a 24vac transformer connected to a normal outlet? Something like this: [link]

Thank you for your expertise on this.

Unfortunately I can’t run a wire from the unit because I’m in an apartment. Should I keep the jumper and remove the wire going from transformer to RC? (So the transformer would only power the C)

I know these are probably basic questions so I appreciate the help man.

Not trying to persuade you one way or the other, but you might just want to take a look at what is involved using the adapter. It's very simple if you go that route. Here's a link to one on amazon. This is the one I bought:

To be honest though, I'd probably go with the programmable thermostat except I like the remote sensors with the ecobee and also being able to monitor the temperature when I'm not at home because I'm paranoid like that!

I’ve installed many Nests in two wire only heating systems. Unless you have multiple zones, you have a very low chance of needing a common wire installed.

However, if installing a new bundle of wires is something you don’t want to do or don’t have the money for, here is another solution: 24 Volt C-Wire Power Adapter/Transformer for Ecobee Nest Honeywell Emerson Smart WiFi Thermostat by Fyve Global | 25 ft Cable [link]

sorry for bothering you again. i found this thermostat voltage adapter on amazon ([link]). would this work for my system if i use it to power Nest (as there is no C wire). thank you

One ref is in the comments on this product: https://www.amazon.com/Adapter-Transformer-Honeywell-Thermostat-Fyve/dp/B075PN6NCV

May be ugly but get a 24v transformer and hook it to the Rc and C terminals for constant power. Something like https://www.amazon.com/Adapter-Transformer-Honeywell-Thermostat-Fyve/dp/B075PN6NCV

You can just a c-wire adapter that plugs into the wall. Not sure if that’s what you meant, but that’s what I did to replace the old thermostat I had.

Would I need anything else? Will this work? Fyve 24 Volt Transformer

I never tried disconnecting it completely. I bought a power supply from Amazon for it and have it on, but not actually controlling anything.

You can purchase plug in transformers that provide the voltage for the c-wire depending on your system and thermostat. Here is an example on Amazon: https://www.amazon.com/dp/B075PN6NCV/

I did this for my parents. Make your life easier and use an external transformer. Follow option 2 from the link above.

Buy a transformer from Amazon. This is the one I used: https://www.amazon.com/Adapter-Transformer-Honeywell-Thermostat-Fyve/dp/B075PN6NCV

(I see you have an extra blue wire. But I would avoid it since you don't need central air conditioner).

if you want to replicate the experience of a battery powered thermostat with the ecobee (since you have 2 wire heat), you'll need to have an outlet near each thermostat location. You can buy an external transformer for each. I have used this one before:

The wires from the external transformer will go into Rc and C. The existing two wires will go into Rh and W1. This way, there's no need for a C wire or to worry about power issues because of incorrect wiring. The ecobee will have its own power source and triggers the heat the same way your old thermostat did, by closing the circuit between Rh and W1.

Okay, I’m only in this apartment for a year so do you think I could just use this

To remedy my issue?

Thank you for the response, @dapala1

If I tape up the other black wire, the ecobee will not turn on. Should I try something different?

So essentially something like this is the way to go: https://www.amazon.com/gp/product/B075PN6NCV/ref=ppx_yo_dt_b_asin_title_o00_s00?ie=UTF8&amp;psc=1

I've seen a few of those and honestly was wondering if they'd work on any thermostat. I've found ones like this [link] and wondered if I could possibly use it on, say, a Nest thermostat like this one [link] or any other thermostat that required the use of a C wire to operate.

Thank you so much for your help. This is what I ended up doing. - https://www.amazon.com/Adapter-Transformer-Honeywell-Thermostat-Fyve/dp/B075PN6NCV/ref=sr_1_2_sspa?ie=UTF8&amp;qid=1543963199&amp;sr=8-2-spons&amp;keywords=24VAC+transformer&amp;psc=1

Thanks for all y'all's input! I've got an ecobee3 lite and I'm going to try the 'repurpose G wire as C wire' tactic this evening (we never use the fan independently of the furnace -- pretty sure my wife is unaware that's even an option).

In the event that doesn't work, my plan is to supply 24V to the thermostat with one of these (which quite conveniently includes a wiring diagram in the product images).

mad props to this blog post that linked the 24V power supply and goes into a little greater detail.

quick disclaimer: I am not the author of that blog, nor am I qualified to be offering wiring advice.

That one looks good. Here is one I found that is rated for the nest but only outputs 300mA.

If it only requires 300mA, then either one will work.