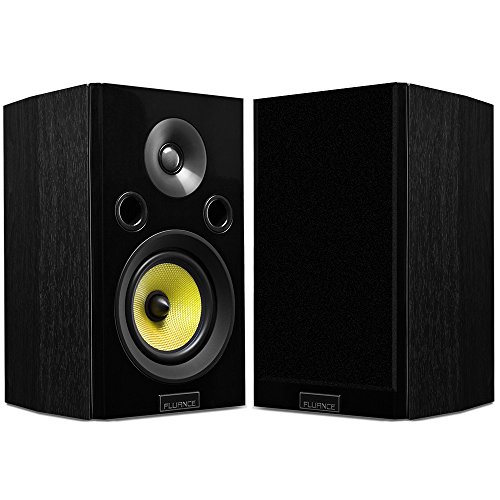 This product was mentioned in 25 comments, with an average of 0.92 upvotes

for $200, you can't really get better than these fluances.

Also, I don't know about the SMLS. Sorry.

I'm 95% set on those Fluance Signatures you recommended. '95%' as in I haven't gotten around to purchasing them yet. And I probably will throw in a Dayton 1200 sub once I get my tax return. I'll run the L/R through the sub, to the Fluance. Whatcha think?

Fluance Signature Bookshelf Speakers are on sale at Amazon and directly from Fluance for $99.96/pair. I just pulled the trigger.

Im looking into buying the Fluance Signature Series System and am wondering how much i would need to spend to actually power these things. Also, if i wanted to get a woofer in the future would i need a receiver or can a small amplifier power a sub, thank you!

Also have a question about a 5 channel mixer, i would like a 5 channel mixer as i have a few pairs of headphones, but if i got one, could i power a speaker system off of it? or even a subwoofer?

That Fluance speaker is an Affiliate link. Please use the regular Amazon link and I will approve your thread.

What sort of amp/speakers would you get for these speakers? They are the Fluance Signature series HIFI two way bookshelf speakers. I want to connect them to 1) my PC and 2) my TV and PS4

> This Denon seems to have multieq for Ausyssey version, which is quite shitty. I think you can find something with Audyssey XT for this kind of money.

I remember thewirecutter saying a level above the receiver in my post had a better Ausyssey system, so I'll look into that and see if it's the Audyssey XT. It looks like the Denon AVR-X1400H has Audyssey XT and it's only $50 more.

>It’s not especially overkill but it’s not useful. Most floorstanders are incapable of doing what a sub does anyway.

I've read on here that bookshelves and a sub are just as good as floorstanders and a sub. I just like the look of floorstanding a lot better tho. It seems weird to have a lil bookshelf on a speaker pole next to your tv. I also read you'd wanna go with the RP line with Klipsch so then your floorstands are more epensive and around $700 for the RP-250Fs as opposed to some bookshelves like the Fluance which are $300. And then I can take that money and get the svs pb-1000 sub that /u/GbMaxSE suggested, assuming floorstanders sound no different than bookshelves