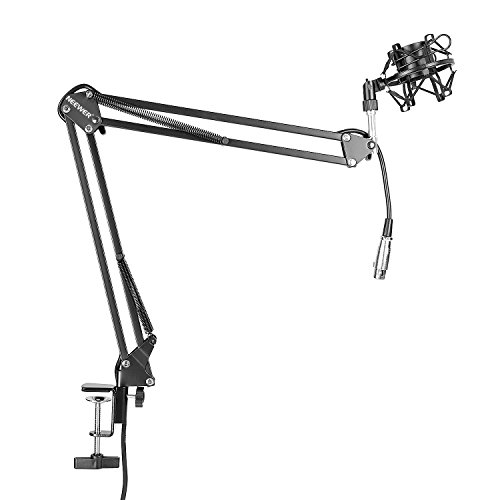 This product was mentioned in 31 comments, with an average of 0.97 upvotes

Currently using an AT2020 and this microphone suspension arm :

Not sure if it ships to Australia or where it may be in stock but if you can find it hopefully it is pretty cheap. Not a perfect fit really for the at2020 and took a bit of effort just to get in but the yeti seems like it would be even harder to mount (which is why I bought the at2020 in the first place as well).

I recently purchased the AT2020 with this arm. The at2020 is a bit heavy for this arm, but it is more than manageable to hold the mic in almost any position you want, with a little maneuvering. It was very difficult to fit it into the holster(shock mount). I use an XLR version also.

Not to sound rude, but you can't shell out 30 dollars for a boom arm stand? Click here

Cool, thanks! On the AT2020, do I need any special cords? Part of the reason I wanted the Yeti was because it uses a USB(right?). I'm currently stuck with a laptop, so I don't really want to have to use a bunch of adapters. Also, would something like this work well?

A mic stand makes the difference. Something like this ([link]) will remove all vibrations that comes from the keyboard and mouse, it also allows the mic to be closer to your mouth.

i bought this boom arm made by neewer which came with a shockmount. the mount was a very tight fit after a bit of a struggle.

also for the pop filter i have the windtech popguard...but honestly the at2020 doesn't actually need a pop filter with the way its designed. a lot of people don't actually know that.

this is the boom arm i have.

the features are essentially the same, however the build quality can be much better with more expensive arms. For example, mine while functional has some issues. the mounting bracket was not threaded right so i had to force my mic to fit it, its made of VERY CHEAP aluminium that is very soft.

secondly, while not a problem now i noticed that where the springs attach, its made of plastic. I fully expect these pins to break over time, but it looks like i can machine a metal pin for it so thats good.

Additionally, mine came with an XLR cable that was total garbage, i had to cut it out of the boom arm.

But, it works. so above everything else, i would say the cheaper mic stands are built extremely cheap. They will function, but they are far from a long term buy in my experience.

if i had to do it again i would have bought a better arm for a higher cost because i don't honestly see this one lasting over a year.

Hard to find a better deal than this. Boom arm with a good shock mount for 20 bucks. I use this stand myself and have no complaints.

The shock mount is a must (In my opinion) when you are mounting your microphone to your desk. All the vibration from your keyboard and etc will travel through the arm and in to your microphone muddying your sound without one.

I did some what of the same thing (minus the nice bezel). Except I mounted it on one of these then slapped that on the back of my case. Il link pics when I get home.

Scissor arm mic stands can make a huge difference if you have limited desk space. Great for cord-management too. Don't need a mic right now? Just shove the whole thing out of the way.

I'm sure the mic will be fine for most use. Without a digital audio interface, you'll be limited to microphones that are direct USB devices. While they do record sound, you're never really going to get that "radio voice" that you might be seeking. Next step up would be to get an interface and step up to an XLR vocal mic. Shure makes some damn good voiceover mics, but they'll set you back a couple hundred. The difference is night and day, though.

Those headphones are fantastic for listening, but maybe not the best for editing. I'd go for something with a much flatter response that isn't open-ear. I've been using a basic pair of SONY 7506s and I've not had too much of a problem with them. The ears could use a bit more padding, but the sound is good enough to do what I want out of them. Ideally, one should use a decent set of studio monitors for proper editing, but... yeah that's a major investment. For basic voiceover stuff it's not going to be super necessary.

I actually think it would fit if you unscrewed it from the stand. The scissor mount end is a screw end that can fit a shock mount or a normal mic holder.

I use a Shure SM 57 lo but a lot of people use the Blue Yeti.

It's alright, you're correct it is cheap. It's the connector end of the Neewer desk stand the whole thing was only $25 (Canadian) on amazon.ca. I guess with this particular aspect, is where it truly shows you get what you pay for.

Yes. This is the exact one I ordered. They have a cheaper one that doesn't have the built in cable, but having the cable is nice since I have an XLR mic :

Edit: Ha! Just noticed I ordered it exactly two years ago to the day!