What is reddit's opinion of A-MAZE-N AMNPS Maze Pellet Smoker, Hot or Cold Smoking, 5 x 8 Inch?
From 3.5 billion comments
As an Amazon Associate I earn from qualifying purchases. The following content includes affiliate links for which I may make a small commission at no extra cost to you should you make a purchase. 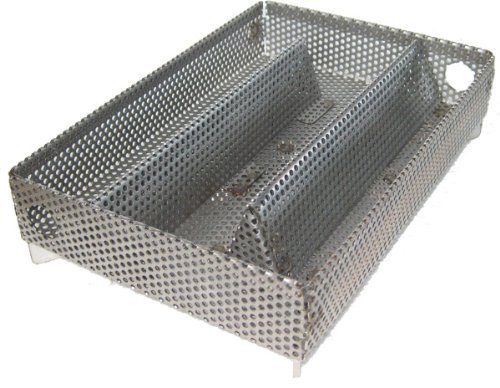 This product was mentioned in 29 comments, with an average of 1.21 upvotes

I've had a Memphis Pro for 8 years and cook on it year round, several times a week. It was hella expensive, but it was literally the only 100% stainless steel grill available, and I was sick of grills rusting to junk in a couple years. other "stainless" grills tend to have a stainless lid or box and the rest is good old chinesium.

It has held up great, I just gave it the annual scrub down this weekend and it still looks like new.

Honestly though, unless $4,000 isn't a lot of money to you I probably wouldn't recommend it. Primarily because the investment is so large that the grill is basically an heirloom item. There are new features like WiFi control that I'd love to have, but I have so much invested in the Memphis that it's hard to justify. And to be honest, $1000 will get you a full featured grill from pretty much any other manufacturer, and you could throw 4 of them in the trash before you hit the cost of a Memphis.

all that being said, I do love the grill. some stand out features:

as far as smoke volume goes, my experience with Traeger and Memphis is that even at their smokiest, pellet grills don't inherently generate as much smoke as stick burning smokers. When I want to kick up the smoke volume I just stick in a a-maze-n smoke tray, which is also great for cold smoking.

Traeger just announced some radically redesigned models that look interesting, but are unfortunately still stuck with the achilles heel of a long auger tube. That would be a deal breaker for me on any grill due to the difficulty of clearing jams and possibility of burn back.

I use this for doing cheese on my kettle, just fill with some pellets light them up and smoke.

This, it was 65F out yesterday and i smoked some cheddar and the inside of the grill using one of the back and forth maze smokers, it never got above 70F for the entire 4 hours. After 4 hours of smoking the thing had just barely finished turning the first corner so i figure i could in theory get 12 hours of cold smoke. Why you would ever need that long cold something something i have no idea, but i could :D

Not a bad idea. I tried that but was unable to light the wood easily. If I'm in a hurry, I get it started with a blow torch. I'm now going to give this AmazN smoke box contraption a whirl.

It should be able to pull double duty and add some smoke pressure to my electric smoker. When this smoker wears out, I'll look for one that has a wood tray that can be refilled without opening the rest of the smoker. Traeggers look nice, but I've made excellent meals on a free campground grill. It's difficult to justify the expense.

Not sure about the gravity series, but on my masterbuilt, it has the round chip loader in the side. I took a mailbox, cut a hole in the back to fit a dryer vent tube, 3 smaller holes in the door for air flow, and use an a-maze-n pellet smoker tray inside the mailbox. By the time the smoke travels through the vent tube and into the smoker, it's had time to get nice and cool. In fact, I'm going to be using this method to cold smoke some bacon this weekend that I have had curing.

Lookup up cardboard box smoker on YouTube. Now that it’s cold outside I use the smoker to cold smoke food up to 24 hours, then finish the meat inside in an oven. I even use the box in a Traeger when I want to cold smoke. For 24 hours, it takes two chargers of pellets. A 20 lb bag of pellets lasts forever. I just brined and cold smoked a pork belly and gave packages of the bacon to my neighbors for Christmas. It was extremely well received!

I could have done it all in a cardboard box.

Google up (or go to smokingmeatforums.com) "mail box smoker mod".

This involves placing a pellet tray or tube into a metal container and using aluminum dryer ducting to funnel the smoke produced into the smoker body. My A-maze-N pellet tray gives me 10-12 hours of uninterrupted smoke if I light one end, 6-7 hours if I light both ends. Lighting both ends makes more smoke.

So, long smoke time. You can now cold smoke. You still can hot smoke and/or use your smoker as it sits or use the mail box mod.

I think he's talking about something like this. The chip smoker in the MBS units can be really aggressive. I switched to their external chip smoker (since I wanted to try cold smoking cheese) and still had to pipe the smoke through some dryer duct to reduce the tendency for it to get really acrid.

Most people use the a-maze-n pellet tray or something like a smokin-it brand smoker has a tray big enough.

I get that a pellet can run at 500 all night, but so could my gas grill. I'm sure at 500 you aren't getting much smoke flavor from pellets, right?

I second the suggestion to use a pellet tray in an electric smoker. It provides a much more consistent smoke than using the chips in the built in tray that only smoke when the element is actually heating. Plus you can use it to cold smoke with too.

Rinkelstein hit the nail on the head to make sure you are using the wood chip holder correctly. That should get you a decent amount of smoke coming out of the vent hole on top.

I also have an MES30 and from the recommendation of other forums purchased the A-MAZE-N 5x8 Pellet Tray. It's very simple to use and will definitely give you much more smoke. Here is a link to the product, [link]. Simple youtube videos will show to how to load it and light it.

It's to increase the chip capacity. I just slide a chip tray in there. I also have an A-MAZE-N pellet tray, which you can actually set for overnight without having to re-ignite or restock. Some people don't like the wood pellets, but I've had decent results with them.

Get one of these and throw it in the smoke box full of pellets. Will produce a good amount of smoke without raising temps too much...if at all. I use it in my cold smoker set up and it doesn't raise the temp at all.

If you sprinkle them on the coals, they'll just burn with little to no smoke. a foil boat kind of works, but basically makes an uncontrolled smoke bomb that will only last a few minutes.

Get an A-Maze-N pellet tray or tube. I prefer the tray myself.

Here is a link to the accessory I mentioned [link]

I am definitely looking forward to smoking vegetables and other things come summer when we can have a cookout as opposed to just cooking for myself for the week. One thing I saw that interested me was making "smoked cocktails". Apparently this is done by putting a mason jar in the smoker, letting it fill, then making the cocktail in the mason jar then pouring into a glass... might be pretty good with an old fashioned.

You're better off cold smoking the hard boiled eggs, or they will overcook and get rubbery. I use this contraption inside by regular smoker (which is not fired up at the time). You can also make your own DIY chip/pellet holder for cold smoking.

Wet the eggs down with a little Worcestershire or soy sauce, then lightly sprinkle them with a spice rub. You won't need to smoke for very long, just an hour or two. Chill them overnight to allow the flavors to develop. Or at least chill them completely before slicing if you need to make the salad the same day.

I found I had to reload the chip box fairly regularly. With this you can use pellets and get 8-12 hours of smoke.

You can cold smoke in your WSM with this: https://www.amazon.com/MAZE-N-Pellet-Smoker-Smoking-Works/dp/B007ROPJ1M. I use it to cold smoke in my OKJ offset.

Here is a link to the A-Maze-N pellet smoker I use. [link]

Checkout the AMNPS tray. Lets you use pellets instead of chips in your MES. Some folks combine that with a mailbox mod in order to go offset.

Oh and Wrap your pan and bottom tray in foil makes for easy cleanup.

I use this whenever I use my electric smoker.

It's a metal tube in which you put pellets (the kind you use with pellet grills), light it up, and then it keeps smoking for hours.

I end up using the built-in chip tray very rarely.

This is the one I have (smoke for 6 hours)http://lizzq.com/pellet-smoker-tube/

For longer smokes, you can use something like this one: https://www.amazon.com/-MAZE-N-Pellet-Smoker-Smoking-Works/dp/B007ROPJ1M?SubscriptionId=AKIAILSHYYTFIVPWUY6Q&amp;tag=duckduckgo-ffab-20&amp;linkCode=xm2&amp;camp=2025&amp;creative=165953&amp;creativeASIN=B007ROPJ1M

Thanks! I was going to put one of these in the Kamado Joe on a rack below the meat. [link]

Have you cold smoked raw meat before (for cooking later)?

You could in two days

It's best to cold smoke hard boiled eggs. They're already cooked; you don't need to cook them further. You can use this to turn your smoker or grill into a cold smoker.

Look on eBay how to light and use them. Super easy

Honestly, I've worked with a Thermapen and it's great, but I can do the same work with a calibrated $5 stick thermometer. The Maverick wireless dual probe is more important. You put one probe in the meat and leave the other in the smoke chamber, then you clip the wireless monitor to your pocket. If either temp drifts above/below the limits you set, an alarm goes off.

Amazen pellet smoker. $35 seems pricey for this item, but it works very well. It allows you to use any smoker or grill as a cold smoker. The wood chips smoulder in a slow snake without producing much heat. You set it inside the smoker and use it without using briquets or turning on the propane.

<em>Charred and Scruffed</em> by Adam Perry Lang. This is an innovative barbecue book with lots of creative ideas. Lang is classically French trained, and applies that knowledge to smoking and grilling. For an idea of his perspective: [link]