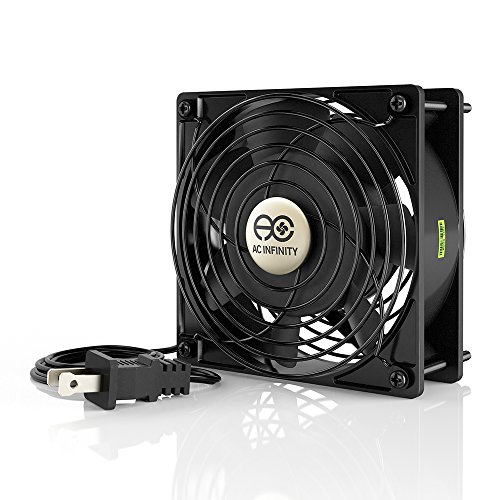 This product was mentioned in 22 comments, with an average of 1.00 upvotes

Another tip I'll add is don't use a muffin fan for circulating air. Something like this:

It generates a surprising amount of heat. I once unplugged my temp controller but left the fan going and it got the inside of my chest cooler up past 95F. Heck of a diacetyl rest.

I used one in my keezer for a while as well and my compresser kicked on and off far more than it does now with something like /u/Wadofmeat69 suggests.

Do you think this fan would be enough if I am going to only have about a foot and a half of tubing? My printer is right next to the window. If not that one is not much more expensive and does have more than double the CFM rating.

Wat? Even the most popular booth on this sub (from Amazon) doesn't even pull 150 cfm. You can never go wrong with more power but it's like killing an ant with a bazooka. For hobby brushes I would recommend between 100-150cfm. Anything more and your sucking up more paint than is going on the model.

I do agree though that most bathroom fans are inadequate but suggesting you should get 450 cfm fan is insane unless he spraying a 1:1 car.

This is my fan

It performs more than well enough for model painting and is super quiet. Passes the baby powder test with flying colors and haven't had any issues with overspray getting sucked up.

8.7 sounds low, either way though 225 cfm sounds easy to get from a cheap fan and 225 is way higher than what the engine will put out. I think its a good plan. Maybe use a 120v square cooling fan. Not saying this is the one but:

This is what I'm talking about. I don't think heat would be too big an issue if the the cfm was high enough to pull extra cooling air. Maybe put the fan as far from the engine as possible and maybe use like stove pipe?

People won't be sleeping near this right?

I have the cost breakdown in the descriptions. The fan flows twice as much as a $15 bath vent fan (110CFM vs 50CFM). It was also roughly the same cost: $17 AC Infinity Muffin Fan

As for suction, it works very well now that I have a better filter. I also have a second fan, but I'm still not sure if I want to install it.

What do you think of this? Don't feel like whipping out my arduino and messing with pwm lol

A set of less stupid questions:

It's an AC infinity muffin fan, more bad ass than a computer fan

Will this fan be a good one to use for a DIY spray booth?

Thanks for the recommendation. Any reason why you didn't go with the 38mm that are recommended for server racks?

Sure thing here's the link this one isn't quiet but isn't noisy, don't notice it unless I try hard enough.

I bought this fan and mounted to the back of the enclosure I built. Moves a lot of air and recirculates well.

Check these out as cheap (under $20) but much better alternatives:

I'm using this fan and then have a 6in to 4in duct reducer.

I am using this fan with a 4" carbon filter and it works great.

Probably not because then you will have stale old air sitting in your bucket when plants need fresh air in order to grow properly. I'd 100% recommend getting a cheap pc fan for intake man, at the very LEAST drill some holes lower down for passive air intake(and I don't mean small homes, 1/2" at the bare minimum, and a lot of them). What do you mean carbon filter? The fan I was talking about is this one:

It is very sturdy, simple, and moves a shit ton of air. There is no real use imo with adding a carbon filter on the intake unless you have really gross smelling air or something outside of your bucket. You COULD add a carbon filter to the exhaust if you wanted to help keep the weed smell down later in your grow, but that isn't until late veg/all of flower.

This is the exhaust fan I got, crazy powerful.

I just finished my first pc grow, 19 grams after a week dry when it went into the jar, so with some LST you can easily make that 3.5 grams a month mark.

Fans, I used these and I mounted a power strip on the inside of the case, it runs those 2 fans 24/7 and a timer for my lights, which are CFLs plugged into a 2nd strip. They are really noisy, though no splicing needed and they move a lot of air. I'm in a humid environment and didn't want mold. I did use a less powerful PC fan spliced into a cell charger hung inside the case to blow on the plant when it was small to help strengthen the stem.

If that case is steel and not aluminum, you may look at using mylar instead of the windshield bubble wrap and mount stuff using magnets. I used the windshield stuff it's too thick, so I split it using a razor blade so it'd be thin enough that I could put magnets on the back of my power strips and stick them to the back panel. If it's aluminum you'll have to mount with zip ties of screws or something.

You're gonna want a light trap. I used this style I got some PVC/vinyl "outside corner molding" or "corner guard" from the local hardware store for mine and left it white instead of black. This was just on the front intake, the rear exhaust had a carbon filter taped over it.

For exhaust filter I used these the smoker ones have actual chunks of carbon in them, there's also lots of cheaper diy versions out there, but I found taping one of these over the exhaust to be easier. I used some regular black AC foam over the front behind the front face plate but in front of the intake fan.

Can't help with that light, may order one myself, just make sure when looking at LEDs that it's not too wide for the case. Also see where the plug comes into the back, you may loose a good bit of vertical room due to cord and mounting. I used CFLs that were plugged into a normal power strip that was stuck to the back wall with magnets and it worked well. I could raise and lower the lights easily, but could only get 3 23watt (100 equiv) bulbs in that one strip.

You'll also want a roll of reflective foil/hvac/duct tape to seal all the corners and whatnot.

I put my intakes towards the top of the bucket and my exhaust fan in the lid. It mostly depends on what type of pot you're going to use. If it fills your bucket then you'll want to have them high enough so the air isn't blocked. If there's some space around it then you could go lower but be sure to leave a little space at the bottom if you plan to make a drainage tray. I planned my bucket with a 3 gallon smart pot in mind so i kept the intakes high enough to not be obstructed. There's a link to my first bucket in my profile as Ekropf was kind enough to put it on spacebuckets.com. I haven't taken pics of my 2nd bucket yet, but it's similar. That site has lots of great pictures and info. If you do end up using an intake fan you'll want to mount it somewhere that doesn't blow directly on the top of your pot as it will dry out the top layer of the medium too quickly so the wet/dry cycle will be tough to maintain. I can't stress the passive intake enough. I was very much of the opinion that I was going to have 1 intake and 1 exhaust fan but some very good people here pointed me in the right direction before I started building. You can see the thread and comments in my profile. (Hoping I can pass along the knowledge I gained. The people on this subreddit are awesome and helped me immensely.) I was very pleasantly surprised by the pvc elbows. They're only about 80 cents each and since I had already ordered 2 fans I made a 2nd bucket. Also, if odor control is important to you then you'll want to maintain negative pressure in your bucket. Intake fans can lead to positive pressure and air leak whereas passive will guarantee negative pressure. Just Google it if you haven't read about it yet.

Regarding the fans; here's what I bought. They're plug and play for a regular outlet. [link] I also got lamp dimmers for my fans and they work great. Here's a link but I found them for 7 bucks at a local home store similar to Lowes or Home Depot. [link]

I'd recommend getting a temp/humidity weather monitor and try your bucket with 1 fan first. You can always install a 2nd if needed. It's important to check temp/humidity with your pot and medium in the bucket...I found its much different than an empty bucket. Something like this... [link]

I found cheap bricks of coco at Petsmart. It's also used for bedding/substrate in reptile terrariums. Roughly 6 bucks for 8 quarts...add about 30% perlite or vermiculite and you can easily fill a 2-3 gallon pot. [link]

Here's what I did for led side lighting and power supply. It's not an absolute must, but definitely helpful from what I've read.

If you have any more questions, feel free to pm me. I highly suggest looking through spacebuckets.com though...it'll give you lots of different ideas and you'll be able to see how they work before building your bucket.