What is reddit's opinion of AC Infinity CLOUDLINE T4, Quiet 4” Inline Duct Fan with Temperature Humidity Controller - Ventilation Exhaust Fan for Heating Cooling Booster, Grow Tents, Hydroponics?
From 3.5 billion comments
As an Amazon Associate I earn from qualifying purchases. The following content includes affiliate links for which I may make a small commission at no extra cost to you should you make a purchase. 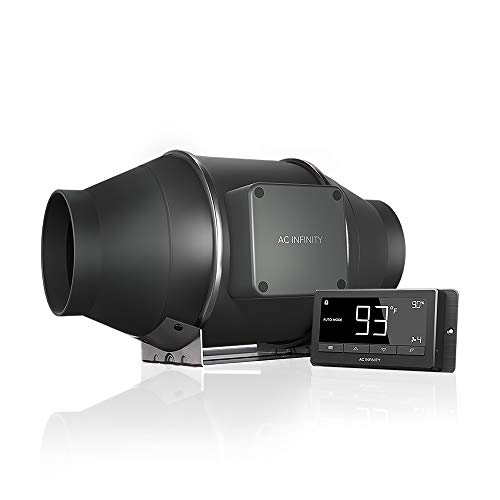 This product was mentioned in 37 comments, with an average of 1.14 upvotes

How large of a tent can you fit?

Like the other guy mentioned, AC Infinity is swinging hard in to the grow industry right now. They even have an LED light coming out REAL soon that I will be purchasing on release. I suggest their equipment from my experience.

No matter what tent or anything else you choose, I will 100% say that in my opinion and I would be willing to bet on most anyone else that has used it, the AC Infinity Cloudline inline fans are absolutely the best buy for the money. They are also very quiet compared to fans I've used. [link]

They automatically kick on and off depending on the environment rules you set.

i.e. humidity set at 60% and temperates set at 80°f means that any time the sensor detects that your tent gets hotter or more humid than that, it kicks on and vents out your tent till it's back in spec. It's SOOOOO NICE to have that autonomy.

This is my duct fan. Im about to order a 2nd one soon. One to pull air in at the bottom and the other w a carbon filter to pull air out the top.

Trust me you’ll be glad you got this!

Btw I just added an ac infinity t4 inline fan w/ 4” carbon filter, it’s pretty awesome. It’s fairly automatic, “set it, and forget it” as I like to say. I just enter the rh% & temp highs and lows, and the fans kick on when it reaches that zone. It has also eliminated the smell completely outside of my tent which has been awesome. It’s legal in my state but I still want to be discrete.

What do you think of this?

I would use the Technical room and install a simple cooling system. The cooling system doesnt need to be much more than an exhaust fan. I recently finished my basement and made a dedicated closet for my rack with it for 100 more dollars I added an active cooling system. This system monitors the temperature and humidity and increase or decreases the exhaust fan accordingly. [link]

You could even plumb that right into your rack so it doesnt heat up the room, just pulls hot air from the rack to the outside.

I’m not an expert on carbon filters or what your budget is but for a ten of this size I would always recommend the cloud line T4 in-line fan, paired with a decent 4 inch carbon filter.

You can find the T4 here

In my opinion it’s a very nice, Quiet and powerful unit for the price that would be more than enough for a 2x2, It also comes with an awesome humidity and temperature control sensor and screen, If you order it off of amazon I would also recommend you grab the ducting while you’re at it!

I do have a self adjusting exhaust fan that can speed up and slow down depending on the temperature and humidity. It keeps everything where I set it. Bought on Amazon.

For lights I use a Marshydro Reflector for veg in a 2'x4' grow tent. It's a few years old now and waiting for it to die so I can upgrade. For flower running a 430w HPS in a 4'x4' tent (what this system was built for).

I try and keep 5 gal in the res. Do a complete water change once per week.

Congrats on the Epilog! Great machine.

I too bought my fan from a hydroponics supplier but also look at HVAC suppliers; they typically have lower prices as HVAC guys are re sellers and need things to actually perform to their specs (unlike hydro) so they can pass code/engineering for permits.

Just remember you can only have two 90deg turns in a duct before the pressure becomes compromised to the point the specs no longer apply. Also if you can, use straight duct rather spiral as that has more resistance (most spiral duct is designed for short dryer runs where pressure isn't crucial).

I got a more basic one but this is probably what I'd buy now:

That will definitely work but check out ac infinity fan on amazon. You still need to get a filter but holy fuck this fan is amazing. I just installed it today and it is so incredibly quiet and automatic adjusts the fan speed depending on what temp you want to maintain in the tent.

I'm not sure about the dead band, but here's the link.

I chose this one because my setup is in my 1000 sqft open loayout condo and I wanted it to be quiet.

Look into inline duct fans for pot grow rooms, 4" is a good size. Vented out the floor.

I followed the UFO Lid Install Guide below, and it worked perfectly for securing the light inside of the bucket. When you’re adding the carbon filter, you just need to add an adapter at the very top (I put this instead of the AC Infinity fan guard), where the duct connects.

I have one of these setups.

Here's my part list from my spring build. [link]

Lots of flexibility in this list for cost and types.

Since this grow I've bought an AC Infinity Cloudline T4 and moved the existing VIVOSON to the bottom of the outside of the tent and using it as an intake. Here's the new [link]

I tried to grow 3 plants initially... that was way to many even with meticulous LST and netting. Currently have 1 going and have a nice full healthy tent. Considering running two autos next run though.

Growing in coco and using remo nutrients, I water daily with 10% runoff in a 3gal cloth pot. Easy peazy.

Next thing that I would like to change here is the light. Love my Mars Hydro but this one doesn't have a variable controller and it would be nice to turn it down a tad while in veg. One of those things, it's fine but it could be better.

Here. But oh well seems like you got it figured out. It ships from the UK tho I'm assumed which is odd. Just thought I'd share a good deal.

I agree with the other poster. Use an inline, and if you can make this work, give it a try:

And hey, THANK YOU, you've been the most helpful person I've encountered trying to ask questions about this stuff. People have been very toxic and mean when asking about thoughts on certain lights. Appreciate ya.

I see two version of this fan with different control methods.. which do you think I should go for?

I'm about to buy everything right now

I went in pretty modest but with some future proofing in mind.

Biggest cost is usually your lights. If you have to go cheap I say mars hydro but investing was worth it to me as it's usually you're greatest limitation.

This is what I use in my tent.

It works really well and it's nice that it has the screen and humidity and temp control but you could probably get away with using the S4. It's cheaper but just has a manual controller. I probably would have gone with this one if it was in stock at the time. I'm growing in a room that requires no alterations to temp or humidity though.

Edit: I also went with this carbon filter. It was the cheapest one with decent ratings. Any 4 inch duct filter will fit.

You want something like this, if ease of installation is a factor:

Yeah, some of the telescoping ones are pretty bad, you have to use the silver backed HVAC duct tape (not duct tape in the common form, it's this mirror silver ultra sticky tape that HVAC installers use to actually seal ducts). Even then they have a lot of flow restriction so you either have to use a really beefy fan or deal with the low evacuation pressure.

Wasn't familiar with the cool box from FSL, but really it's a small integrated fan and an external 3000 series chiller.

I don't want to burst your bubble but there's simply no way that fan is 253cfm.

I use an inline 4" heavy duty hurricane duct fan and it tops out at 200cfm. There's simply no way that little PC fan can pull 253cfm unless they've reinvented the wheel with a better one.

I could be wrong but I just don't see how a tiny 12v 4a fan can pull more than an commercial install grade inline 4" mains fan. An easy way to tell is to put a trash bag on the end of your duct run and see how long it takes to inflate. A normal kitchen trash bag is 13 gallons or about 2 cubic feet. A true 253cfm fan should fully inflate that in under HALF a second. If it takes like 4-5 seconds to inflate you know that fan is actually pulling far less.

EDIT: I just checked the data sheet. They're only claiming 253cfm at zero static pressure which means under any type of load (i.e. ductwork, angles etc) that thing loses all pressure (the equivalent of torque) and it's actual real world CFM will be a fraction of that figure.

Typically, the best way of working is to have the fan as close to outlet as possible and if you have to do a long run of duct, try to run not more than two right angles.

You can look on amazon but also hydroponic suppliers often have good deals as they buy them in bulk and need high CFMs.