What is reddit's opinion of Ajinomoto MSG in Plastic Bag, 16 Ounce?
From 3.5 billion comments
As an Amazon Associate I earn from qualifying purchases. The following content includes affiliate links for which I may make a small commission at no extra cost to you should you make a purchase. 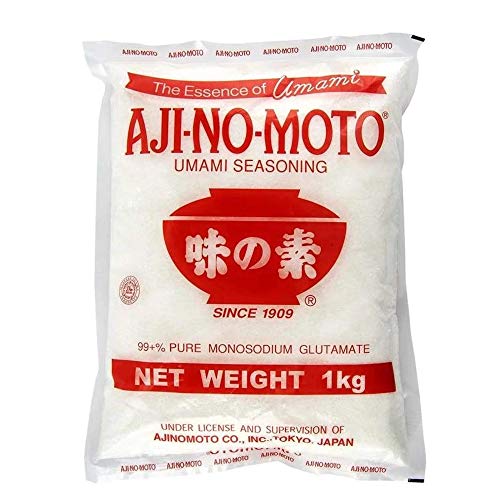 This product was mentioned in 20 comments, with an average of 2.75 upvotes

i dont think it would be a problem seeing as stocks/broths are usually cooked at a low temperature for a longer amount of time. i recommend adding dried shiitake and perhaps finding some ajinomoto in order to give it the classic saltiness/savoriness most people look for in a broth. hope this helps even if only a little bit!

MSG is cheap, I got mine at a local Asian market, but this stuff is on Amazon (it's much cheaper at the asian market) - A lb lasts a long time, I use it frequently and have gone through like 1/3 of it in a year.

Amazon has it pretty cheap, like this item: [link]

I use the Ajinomoto brand myself, works great. Any decent size supermarket should have it as well, barring that, check your local ethnic market. Just remember that you don't need a ton of it to boost the flavor of a dish.

Wait what, you can buy MSG yourself and put it in your mouth ([link]). It tastes more or less like salt.

I'm having a very hard time buying that even in the most ignorant times anyone ever thought only the mystical orientals with their alien philosophies could taste it.

You know, I've actually been meaning to pick some up. I have nothing against it health wise... its only bad for you if you are sensitive to it, and I don't believe I am.

I'll order some up. Thanks for the reminder.

Edit: Wow! only 5.29 on amazon for a pound of it if you use subscribe and save with at least 4 other things on it... Link

Is there a reason you want MSG over substances with natural glutamates in it? I'm not trying to hate on MSG, but if you have to go out of your way to get MSG, maybe it's worth just considering the dish you're using and use the appropriate ingredient. Fish sauce, tomato paste, worcestershire sauce, dashi powder, and mushrooms (try grating dried mushrooms if you don't like the textures) are all substances with glutamates in it. They will affect the flavor a little bit, I suppose, but I really don't think it'll change it so drastically that you must use MSG.

I'm also confused; if I look here on Amazon I see MSG with free shipping... am I missing something?

Umami is a super fun niche technique to pursue! As far as using it goes, it's usually best to add MSG before or during cooking (it's not used in place of salt, but rather to supplement it), which is unlike using salt, which I usually add right right before or during plating (outside of using a rub or marinade). If you can't find it locally, Amazon sells it for $7 a pound:

Serious Eats has some pretty good info for dipping your toes into more umami fun:

Fortunately they have page links I can copy & paste, so here's a clickable list:

I actually use fish sauce and Worcestershire sauce in my award-winning chili! It's pretty fun to play with umami to boost flavor in your favorite dishes!

Ajinomoto is my preferred brand. I buy it from Asian groceries.

I like this stuff that you can order on Amazon. But you can usually find it at Asian grocery stores too.

You can buy it on amazon by the pound. I put some in a salt shaker and it goes pretty well on a lot of foods. It's like a more versatile nooch.
[link]

I started figuring it out by buying Goya Adobo seasoning packets. I noticed it's primary ingredient was MSG and it was like crack for a month, I put it on everything. I then also noticed that it was the #2 ingredient in a Cajun BBQ rub I found, that had no sugar in it (but was again, loaded with MSG.) I literally tried recreating the rub as it had all its ingredients, the only one I didn't have was MSG, and while it tasted...ok...it wasn't the same.

I ended up biting the bullet and bought a bag of MSG off of Amazon for cheap. I actually found this before I found out about sodium citrate.

Both are relatively cheap for the amount you get, and considering the tiny amount you'd use in each recipe I only go through a bag of each maybe once every 2 years.

When I tried recreating that rub again, this time using the MSG, it was spot on. That was literally the only thing missing.

I didn't mean to bring you down this rabbit hole, but there's my 2 cents from a random bar owner and home cook.

P.S. I do use MSG and sodium citrate in some of my bar's recipes, but I save the best for when people come over and eat my homemade food :)

Have you tried using a bit of MSG?