What is reddit's opinion of AngQi Pregnancy Pillow with Jersey Cover, U Shaped Full Body Pillow (Gray)?
From 3.5 billion comments
Created by @mouseofleaves.
As an Amazon Associate I earn from qualifying purchases. 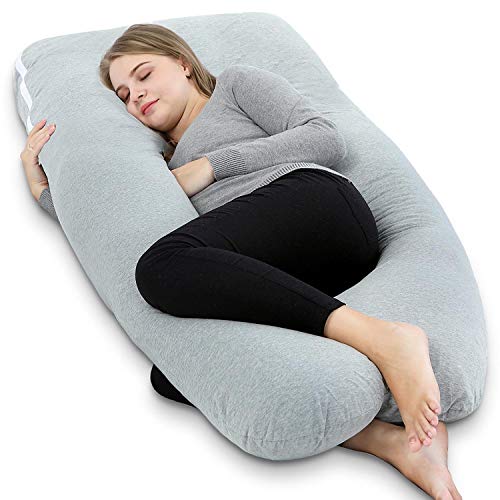 This product was mentioned in 13 comments, with an average of 1.31 upvotes

I will never stop using it. It is my favorite thing Ive ever owned. If the house was burning I would grab the pillow ok. I literally cannot say enough about it. The grey jersey cover is great.

Mine was a hand me down from a friend but this one looks just like it!

Hah! No worries. Btw, thought I would mention using a pregnancy pillow like this from amazon . I have one that I use for my knees, hips, and shoulders... my husband who does not have EDS now has one that he uses because it helps with his back pain by keeping him asleep on his back!!

I’ve been in my pregnancy pillow for about a week now and don’t know how I lived with it. I’m 15+3. Honestly I’d start using it as soon as you want! I got it specifically to help me not roll flat on my back in the middle of the night. I’ve used this one for my first pregnancy and now this one. Cheap, quick and I LOVE it! I do suggest taking some of the stuffing out though. It comes packed. Happy sleeping mama!

It is my favorite purchase I’ve ever made. I know everyone is different with their sleep preferences but I have been having trouble sleeping comfortably for YEARS and I honestly never thought i would be the most comfortable I’ve ever been sleeping while pregnant. Against my fiancé’s wishes I will be keeping this baby around for a while. Even after baby.

I found my perfect pillow a few months ago! I have herniated discs and the best way for me to sleep is on my side. Found this pregnancy pillow on Amazon (I'm a guy btw) and my back issues have considerably diminished since I've been using it.

I found my perfect pillow a few months ago! I have herniated discs and the best way for me to sleep is on my side. Found this pregnancy pillow on Amazon (I'm a guy btw) and my back issues have considerably diminished since I've been using it.

Legit got this one at 14 weeks, husband found it and ordered it for me and omg it’s awesome. It looks like it’s on sale for $30, we paid $50 and it was worth every penny. Now 29 weeks and I’ve gone camping with it, to hotels, and the in laws house and honestly I think I’ll use it post pregnancy. Awkward to drag places outside your house but worth it. And the cover is super easy to clean (I have the jersey grey and it’s super soft).

I put regular pillows under my head and have the body pillow start right under the regular pillows so the curved part is more in my armpit area. I like this one because it's not super full

This one the easy on cover is awesome. I had one that was slide on pillow case like and it was a cardio workout every week to wash the pillowcase.

I’m getting a ameda finesse. I have had a medela and the valves and nonsense were just a lot of hassle.

Have you tried a maternity pillow. Saved my pregnant life, I swear!

That's the one I bought, I hope the suggestion helps you

Can't lose with one of these.

^^^^AUTOMOD The following is a copy of the above post. This comment is a record of the above post as it was originally written, in case the post is deleted or edited. Read this before contacting the mod team

So my wife gave birth 8 months ago. During he pregnancy she was having trouble sleeping so I bought her a pregnancy body pillow that was a lot more comfortable for her. However even after giving birth she prefers sleeping with the body pillow rather than me. She just says she's used to it and finds it more comfortable to sleep with. Maybe I'm being just being dramatic but it feels like she just doesn't want to sleep with me. I'm often sleeping near the edge of the bed using a separate blanket and I just feel a lot more lonely.

I brought all this up with her and she told me that I'm "being more of a baby than our new born" with all this and to just deal with it. This led to a big fight where we were both yelling at each other. I don't think either of us said anything particularly hurtful but it's not the norm in our relationship to raise our voices like we did and argue for as long as we did.

Outside of this our relationship is more or less fine. I mean I obviously still love her and I'm sure she still loves me.

Basically AITA for starting an argument over something like this?

This is the pillow I bought - [link]

I am a bot, and this action was performed automatically. Please [contact the moderators of this subreddit](/message/compose/?to=/r/AmItheAsshole) if you have any questions or concerns.