What is reddit's opinion of Baby Banz Earmuffs Infant Hearing Protection – Ages 0-2+ Years – Industry Leading Noise Reduction Rating – Soft & Comfortable – Baby Ear Protection?
From 3.5 billion comments
As an Amazon Associate I earn from qualifying purchases. The following content includes affiliate links for which I may make a small commission at no extra cost to you should you make a purchase. 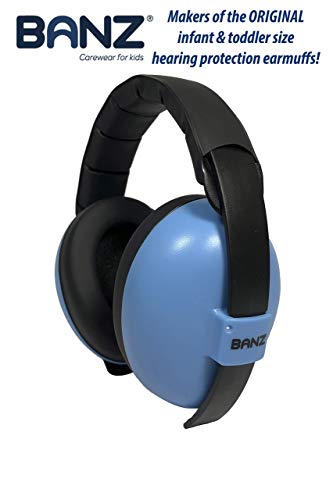 This product was mentioned in 15 comments, with an average of 2.00 upvotes

We got the highest reviewed off of Amazon to use at a wedding. My son was 6 weeks old and slept 6+ hours.. we actually had to wake him to eat.

Editing to add that I saw your other post and I really hope some of the suggestions help. Please keep us updated on if anything works.. as a mother pregnant with my second this is one of my biggest fears once the baby arrives.

You could always get a pair of BabyBanz (on Amazon). We use them when we go to the movies with our 3yo to protect her hearing. Obviously it looks a bit weird, but I figure it’s better than our kids ending up with tinnitus like I’ve got. Here’s a link to the 0-2yo version; they also have a version for 2yo+ as well. [link]

Oh I hope they're useful to you and your LO! I got them on Amazon they aren't the cheapest but they seem to last until toddler age.

Oftentimes, the volume is turned down in those showings. I also see a lot of babies wearing specially sized hearing protection headphones ([link])

I'm not a parent so I don't have to worry about how well they work, but I see them everywhere

long version: we are from DC, brought my LO to a wedding in San Francisco when he was four months old. ceremony was in the evening. we just focused pretty closely on getting him some solid naps before the ceremony, and tried to time it so he was waking up just a bit before the ceremony started. obviously with getting ready and driving that meant he woke up about 1.5-2hrs before.

he sat through the ceremony on my lap pretty well, started to get fussy near the end. no one minded, though :) i was in the front row (it was my husbands sisters wedding) and stood up and went off to the side to bounce w/ him.

because he woke up 2hrs before the ceremony, he was starting to get super sleepy for the reception. but sleepy = fussy. we had the stroller with us (w/ infant carseat), which we put him in to wheel over to the reception. i found a quiet area where i nursed for a bit and then put these on him [link]

he chilled in the stroller for some of the reception but fell asleep pretty quickly and stayed asleep through speeches and loud music.

can you call ahead and ask the venue if they have a quiet room somewhere you can nurse or feed him? i'd suggest doing that, putting the headphones on, and seeing if he'll sleep in the stroller.

No idea...but I did find these for our 2 week old when we went and saw fireworks. She was pretty chill about the whole experience.

I have kids age six months to nine and in my experience taking an infant is easier than taking a toddler. I agree I'd try to sit in a shady area if possible. Noise can be an issue and I've used these before but I honestly didn't need them much.

We have these for our kid

We have the Banz muffs for our girl. It says 0-2 years and she wore them starting around age one when we took her to some drum corps shows.

These. They work great for him.

We went on a 6hr cross-country flight recently - here are my thoughts:

Don't worry about upsetting his schedule. I mean, it'll definitely mess him up depending on the time difference, but as long as you still try to get naps in during the day, he should get used to night/day again pretty quickly. If it's only 4 days and you can manage it, you may not want to get him used to the new time zone...

EDIT: also, where are you going? it could be fun! embrace it. we went to san fran and we said to hell with the nap schedule and dragged him around everywhere with us. he was 4mo old. honestly, he only got super cranky ONCE and we had to go back to the hotel at around 6pm for an early bedtime. but other than that we went on fun hikes with him, stroller walks around the city, etc. he grabbed stroller naps when he needed and he was fine :) plus if he got exhausted during the day he passed the f out at night.

I have no advice lol. Only my recent experience. Keep in mind this is for a kid who already sleeps through the night (i.e. 8pm-6am... sorry).

So: our LO is 4.5 mo and we just traveled to San Francisco for five days (3hrs behind us here on the East Coast). We didn't prep anything...we just kinda went with it.

His bedtime is usually at around 8pm. In general while on the trip, he got cranky/tired right on time at around 5pm. We basically treated it as moving naptime and got him to fall asleep in the stroller or carrier. We either had a bottle with us or I found a quiet place to pop him on the boob to help soothe him. Then, we kept him out with us asleep in the stroller and just got him in his pack and play whenever we got back to our hotel at night. We were there for a wedding so we really had no choice and had to keep him w/ us for rehearsal dinner, ceremony, etc.

Because he was out with us I don't think he necessarily slept as hard as he would in his crib at home, but he was tired so he was still sleeping harder than just a regular nap. Pro tip: bring some noise canceling headphones in case you're at a loud venue like a wedding and want him to sleep longer.

Because he wasn't sleeping as hard, he'd usually wake up naturally as we were getting back to the hotel (no later than 9 or 10pm). We'd change him into his pj's, play for about 20min, breastfeed, read a book, and then try to get him back to sleep in the pack n play. In my mind we were trying to get him into the mindset of "bedtime" so he'd sleep longer.

Whatever the cause, it worked and he got usually a full nights sleep and was up at about 6am every morning.

For whatever reason, he definitely got tired/cranky 3 hours earlier (i.e. right on time w his east coast bedtime), but did not affect his wake-up time in the morning. He still woke up at about 6am. I think it's because we weren't truly putting him in "bed" at 5pm, we kept him out in the stroller.

he hated them for about 5 minutes and then lazer focused on the game.