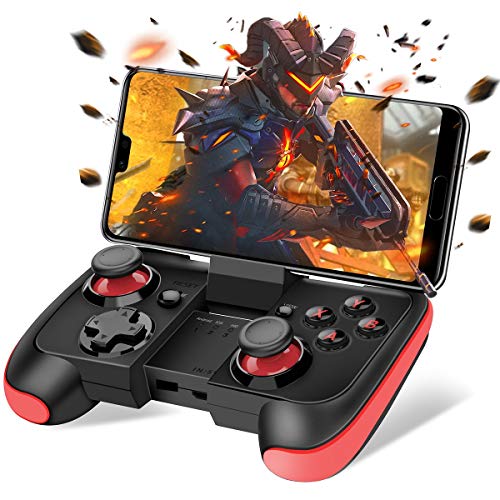 This product was mentioned in 21 comments, with an average of 0.95 upvotes

I recently purchased the BEBONCOOL Bluetooth controller off of Amazon for use on my Z2 Play, and am very happy with it so far. The thumb sticks feel great, although I find myself wishing they had a lower profile sure to start and select button placement.

I personally have the same phone as you and this controller works great imho:

My daughter has stolen it and uses it with her stylo 4 as well. No issues so far with various Android games and a psp emulator.

Check this bad boy out. Great battery life, and connected quickly. Just hold the GO up to the controller. Responsive, and good make. Just don't expect a xbox controller,and this will do great! I have no lag when playing games, and mapping is all the same.

you don't have to get anything fancy, I just have a 20 dollar BEBENCOOL bluetooth controller with a mount attached to the controller. If your phone has a case, the mount is kind of a pain in the ass, but it still works....you just can't move around a lot with it because the mount isn't that sturdy.

If you are going to move around while you game, you might want to look into a different controller, but for my purposes it works fine...

I got this controller on amazon and while it looks a little unorthodox it works surprisingly well for me.

I used to use a moga pro controller but the pairing process was always torture for me when trying to connect it to my OP3. The beboncool controller on the other hand pairs seamlessly since it's just straight Bluetooth without going through an app and the controller works with every emulator i've tried it with. For $19 (with prime) it's pretty solid and very portable.

I picked up one of these Beboncool controllers a few months ago and it's been really good. I haven't used it a ton, but I did use it for most of a 4 hour flight and it worked perfectly. I mostly got it so that I could play Seaman on Reicast.

Edit (forgot to include link) [link]

i used to have this one, [link]

I just picked this up for $18. It feels good and works with everything I've tried. Also has a clip for your phone for non VR games. I definitely recommend it.

I went with this one and am completely satisfied.

I was actually looking at this very one, but I'm hesitant on ever ordering things that ship from China.

I've been screwed over too many times now.

I actually compromised and just ordered This

It doesn't have clickable sticks, and only one set of shoulder bumps, but for the price it's everything I could want.

Thanks to everyone who helped me with their opinions, it's always greatly appreciated!

Only L and R is fine, though I'd really like clickable sticks for PSOne games.

I'm actively using a 7" tablet; though I'm not really looking for a controller to prop it up onto, just a regular gamepad with a portable form factor.

I found This while on the page of the Moga I linked earlier. Down below it lists it as having 12 buttons, so I'm assuming it doesn't have clickable sticks.

I use this and I love it. I'm sure there are better ones out there.

Both worked out-of-the box for me. I can't guarantee it would be the same for you of course, but at least in my case no root or anything of the like was required.

I'm personally using this Beboncool controller, which does have a phone clip:

It's certainly not the best controller in the world, but personally I'm happy with it overall. It holds a phone well, it's super cheap, it's compact, the battery last a long time and the controls work well enough. I mostly play RPGs or SRPGs so I don't play too many action-intensive games but I haven't noticed any input lag.

However, there is one problem at least for me: comfort. It's perfectly fine for short play sessions, but I wouldn't play with it for hours in a row. There's two main factors for this.

1) The controller is incredibly light, but the phone weight is not centered. I assume this issue affects most controllers with a top clip, but the controller lightness doesn't help. Basically, your phone is going to be heavier than the feather-light Beboncool, so physics dictate that it should tilt over. This means that you hold the light part in your hands, and the "heavy" part is hanging on top, trying to flip itself down. Kind of like holding an hammer: the weight is not centered around what you are holding.

A phone is not heavy obviously, but having it off-centered like that for prolonged period becomes uncomfortable, and I THINK it's the main cause of discomfort. By comparison, I also own an Ipega 9023 for tablets (it kind of turns your tablet into a Switch): it's a much heftier controller and my tablet is heavier than my phone, yet even with the added weight it stays comfortable for longer. While I can't vouch for it in any way since I never tried it (and that it's not a pretty controller), I think that a central-held phone controller like the Ipega-9055 might be a good idea.

2) It's pretty flat and small. While it makes the controller very portable, it also means that it lacks the curves of a Playstation or XBox controller. It's obviously better than the old NES controller, but it doesn't fit your hands as well. I'm not sure how much of an issue it would be by itself (ie. without a phone in the clip), but it's not ideal.

It's cheap, portable, reliable and responsive; however if you are planning on using it for hours at a time, I'd suggest you look elsewhere.

They say the new controller's buttons only emulate the ones that already exist on the headset. There are some Gear VR apps that take advantage of other buttons you typically find on a Bluetooth controller.

My Moga's having problems so I'm thinking of ordering this cheap controller that seems to have pretty good reviews.

But, I'm still getting the new Gear VR controller when it goes on sale. As the Samsung page below says, that controller can let you tilt, move, throw, drag, shake and flick. Find those words to see examples of those actions being performed in VR. [link]

Here's the first video I've seen of the new controller in action. [link]

It appears to work like the Daydream controller enabling you to navigate, make selections and interact with objects rapidly. You can't do all that using a regular Bluetooth controller. Like UnExwfaQyi points out, I need the new Gear VR controller now, not yesterday. Now I'm glad I didn't get a Daydream and required Daydream phone just to experience a controller like Gear VR now has.

While this is really cool to build stuff around and play with in a sense of hacking hard- and software, everybody who thinks about buying this or something similar to actually run games on should think about using his phone or tablet instead. There are fantastic clamp on controllers available now that can transform your device easily in a portable deluxe gaming system (especially under Android with emulators):

try this one: [link]

works with the Gear VR great. Been enjoying using it.

I've got this one and it's great. Great battery life and the clip holds the phone really well too.