What is Reddit's opinion of Belkin Thunderbolt 2 Express HD Dock with 1-Meter Thunderbolt Data Transfer Cable, Mac and PC Compatible (F4U085tt)?
From 3.5 billion Reddit comments
As an Amazon Associate I earn from qualifying purchases. The following content includes affiliate links for which I may make a small commission at no extra cost to you should you make a purchase. 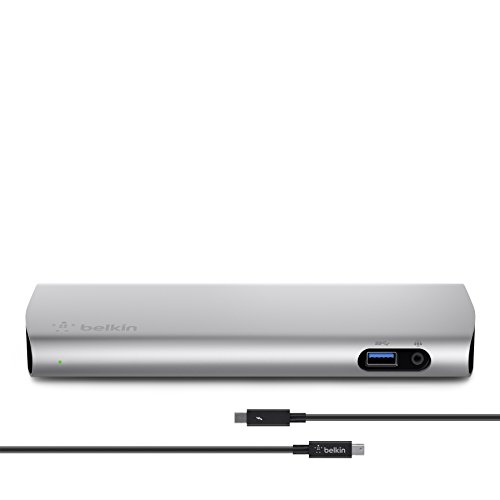 I’d love to help more, my spouse also is doing this and I’ve been helping her perfect the tech for those workflows.

Example: the built in iPad/MacBook integration in Zoom. If you know what I mean... awesome! If not, and you use Zoom, and have an iPad, LMK.

They sell thunderbolt docks, but they tend to be pricey from what I have seen. Here is an example.

I just got my pro delivered yesterday at work myself, but I'm on the software side of things. So congrats!

The only thing I can tell you is if you have a retina display, Windows doesn't handle test sizes well so expect to have to increase the text size on applications.

Oh and you can easily move VM's between workstation and fusion, which is nice.

Although I have never used one I've heard good (and bad) things about the Thunderbolt monitor, there are also many third party docks available at places like [link]

If you wanted a hub instead of a dock, you could get something like this: [link]

Yes, there are thunderbolt 2 hubs that allow you to connect peripherals and Ethernet to your MacBook. Here is one example. Amazon

They exist. They're just expensive. Here's one example:

If you're going to be docking/undocking often, you might want to consider this. It's $275 but gives you three USB3 ports, Ethernet, HDMI, and an extra thunderbolt port, on one device. You can leave your monitor, keyboard and mouse connected to the dock and just plug in/unplug a single thunderbolt cable.

For keyboards, this MacAlly is $15. Personally I prefer the backlit Bluetooth keyboard from Logitech ($80).

I’m just coming back to let you know how the thunderbolt dock is working out. I got the Belkin dock, as opposed to the other one I was looking at just because I felt like I could trust the Belkin brand better.

The one and only complaint I have is about the two audio ports. There is one on the back, and one on the front. The front plug also has mic support. The first problem is that the front plug doesn’t disable the back plug, so if you plug in headphones to the front, and you have a stereo hooked up to the back, then both will play sound. I was hoping that the front plug would disable the back one so I wouldn’t have to turn off my stereo every time I want to use my headphones, just like how the plug on the mac will turn off the speakers on the laptop. The second problem is that the volume and play/pause buttons on the wire of my headphones don’t work through the dock, my headphones have to be plugged directly into the mac in order for those buttons to work. It seems like the dock is supposed to be a seamless extension of the mac, but the way the audio plugs work seems to go against that idea.

As far as ethernet goes, it works fine. I was expecting to get faster speeds through the dock but it turns out that the port in the wall I use is only going at 100 Mbps. I was getting this speed through wireless and I thought this speed was coming from the wireless interface in my mac, but I guess its just my apartments internet (which is supplied by the apartment complex). So I get the same speed through ethernet as I do through wireless, which is the full 100 Mbps bandwidth. That speed is probably sufficient for most people but I was hoping for more speed because I am experimenting with cloud storage and am trying to write my own dropbox-like application to sync data to a number of servers. I also do a lot of work with virtual machines and transferring a virtual machine from my computer to the cloud or another server can take a while. So at 100 Mbps my transfer speeds are capped at about 12 MBps, as you can see in these screenshots.

Overall, I give this dock a good grade. Despite the fact that I didn’t get the ethernet performance I was hoping for, I won’t return it. After all, the speeds I am getting are not related to the dock, and I am sure that I would get much faster speeds with a better service to connect the dock to. The problems with the audio ports are kind of annoying, but it isn’t a deal breaker for me. It does a great job of cleaning up my desk. The single thunderbolt cable that connects it to the mac handles everything that goes through it like a champ. There are no problems with video or data performance. As far as the price goes, it is a little expensive. If they were to fix the audio problems then I would say it is worth the money.

You probably weren’t expecting that much of a review, but I hope that helps you decide if this dock is worth your money.

Here are a few pics of my setup.

I have that henge dock and I love it. However, I would also like to get ethernet connectivity to my mac when it is docked, and have two screens plugged in at the same time. My screens aren't thunderbolt screens, so I can't daisy chain, and without daisy chaining there aren't enough ports. Have you run into this problem at all?

I think a thunderbolt dock will solve this problem. I will use one thunderbolt port on the mac for the dock, and the dock for one screen and the ethernet, then the second thunderbolt port on the mac for the second screen. I think this set up combined with the henge dock will work, but I am worried about what /u/happycj says in this post about how he has to be careful what order he/she plugs everything in. I haven't found anywhere else about this unique situation so I was wondering if you had any input. I'll probably get this dock or this dock pretty soon to try it out.

Which year is your Macbook Air - from memory most of the Macbook airs are equipped with Thunderbolt ports, which means you could use something like this.