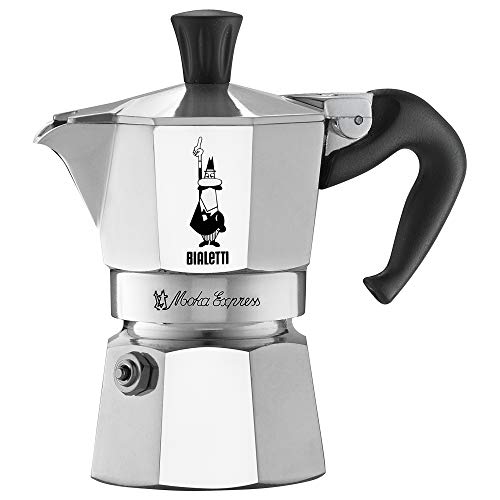 This product was mentioned in 10 comments, with an average of 1.10 upvotes

Even though I'm not the hugest fan of the one I own, maybe get yourself a small Moka Pot? If you can't afford a new gooseneck kettle and pourover cone, the other brew devices you listed are going to yield fairly similar results to a French Press (both utilize immersion brewing).

With a Moka Pot, you're getting a method that departs from both of those - you're using steam pressure brewing and getting a coffee that is pretty unique. You also won't have to buy filters or a kettle for it. Here's what I have.

Moka Pots are generally designed to only brew the size they're built for. If you look you'll see them in a wide array of sizes, explicitly for this reason... including single cup versions.

You can experiment if you want, but don't be surprised if you don't get the results you might expect.

I have taking a liking to espresso and my single cup Bialetti Moka Express is perfect. It's only 7.4oz for the convenience of semi decent espresso. Just pre-grind your beans and you're good to go.

I've been campaigning against Keurig for years, because they make shitty coffee, have an absurd amount of waste (both of coffee and packaging) are stupidly expensive ways of getting coffee, and are generally just consumerist trash.

Please, Dear Trump Supporters, you can't actually support Trump and own a Keurig, it's not allowed, and you can't sell it, because that would help the company by maintaining a market for them, you have to destroy them, and tell everyone you know that they are evil, maybe make up some fake news about how they cause women to get abortions, but only white women, brown and black women are made extra fertile by them. Please, my dear dear Trump Supporters, you must end this menace. You know what is a good fash-friendly coffee maker? Moka Pot. It'll make a far better cup of coffee, almost as quickly, and with far less waste, and you don't have to buy fucking DRMed coffee pods.

I really fucking hate Keurig. Between shitty Trump Supporters angry that their Alabaman compatriots picked a kiddy fiddler and Keurig, I'm really stuck on who to root for. It's a real WASP landing on a stinging nettle situation, someone's getting stung, and I don't give a shit who.

Actually, both, definitely both, and it's great.

This probably is not an option unless you are cooking over a fire, but we have one of these guys (6 cup) and it always goes camping with us. Does great on a stovetop, hot plate or campfire.

In addition to the great options listed previously I will add this; Bialetti Moka Express Stovetop 3-cup. Chose the "3-cup" option.

Right now the 3 cup (which I use personally) is pretty cheap right now (actually cheaper than the AeroPress by $9, but I've seen the AeroPress go for $26 at times). I personally prefer the 3 cup to the 1 cup because it makes more coffee. Also right now it seems the 3 cup is the same price as the 1 cup. Be aware however the coffee it makes is very different than the AeroPress/French press/pour overs. Also the "cup" quantity is about the size of an espresso cup, not a coffee mug size cup.

Also if you/your parents/friends have Costco membership I've found that the Kirkland whole beans (Columbian and whatever rotation they have like Rwanda, Costa Rica, Guatemala) are pretty cheap and work for me. I get a bag every few months and store them in air tight jars.

Having read a comment about things breaking in the dorms I will say this is made from aluminum. Aeropress is always a good option though. However, this is a 1 stop shop solution, no additional equipment required. Granted this will only work if there is a stove. The great thing about the Aeropress is that it will work anywhere there is hot water. Anyways, good luck and have fun!

Traditionally you'd get two (or even three) pots of different sizes because it's really inefficient and suboptimal to use less water and ground coffee in a big pot.

I'd suggest you get a cute one cup pot like this : [link]

Or, even cuter, the Mini Express: [link]

Edit: Shoulda kept reading. Where'd you get the imitation?