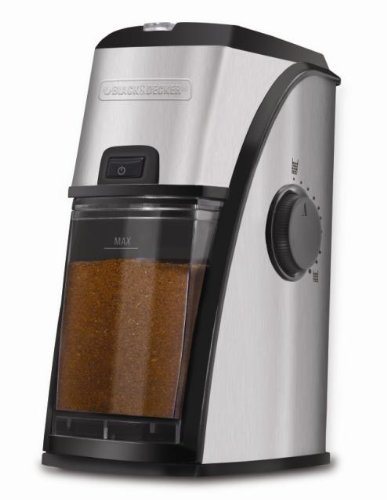 This product was mentioned in 3 comments, with an average of 0.67 upvotes

Personally, I would go with a French press over the Aeropress, and if you don't want to hand-crank your beans, you can get a half decent burr grinder (it actually mills beans instead of chopping them like a blade "grinder") for not too much. For example, I got this Black &amp; Decker at Target several years ago for around $25-30. Since they have only used ones (no thanks, I think?), it may be discontinued, but they list several others on the page in the $35-45 price range. In my opinion, you can skip the scale and pick it up later if you want one. So my checklist would be: French press, burr grinder (manual or electric), and a way to heat up water.

I had one of those! My cat kept breaking it though, and after several times replacing the upper glass piece, I finally got rid of it. I did, however, pick up this thing a couple of weeks ago. One thing that I've noticed with the siphon brewer is that you can vary your extraction a bit by playing around with the grind size and the steep time. I usually do a smaller grind (bigger than espresso, 5 clicks on my Virtuoso as opposed to 0 clicks for espresso), and steep for 60 seconds.

As for your grinder question, I had a couple of inexpensive burr grinders that did an ok job. This seems to be the one that people like on here, but I have never owned one. I have hand grinded coffee a few times, and it takes several minutes to grind enough for a couple cups. I have owned this, which wasn't great, but worked well for medium sized grinds. I also had one of these, which performed about the same as the black and decker, ok for medium sized grinds. If you aren't going to be doing espresso, then a cheap-o burr grinder will probably get you by, since you aren't going to care about getting a really fine grind, but will be concerned with having a nice even medium sized grind. But, that's just my two cents.