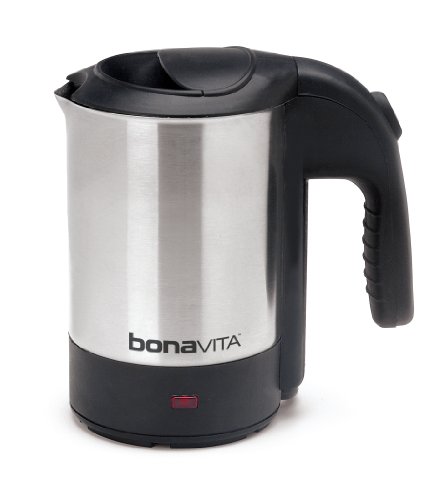 This product was mentioned in 11 comments, with an average of 1.00 upvotes

I am getting me a small travel coffee pot to help make some of these foods. I know hotels don’t clean the coffee pots/kuerigs in most hotel rooms like they should. I will follow some of the suggestions given so far.

For the kettle, it should only be getting a couple of minutes a use per day for the wife's morning coffee - one or two cups supposedly boils in under three minutes with this guy: [link]

It might have helped to be more specific about our needs - sorry I didn't do that earlier. We're planning on a six month road trip, so we'll be driving a bit each day within a city, and probably 2-4 hours every couple of days. Not that I want to purposefully kill a battery, but stretching it's performance for several years isn't entirely necessary for us.

The diagram is our max load. On a day to day basis, we'll probably be in coffeeshops milking their wifi to do a bit of work, so we'll try to prioritize charging laptop and phones while we're there.

Primarily, I'd expect to power the fan (1.5 AH at 8hrs a day - hopefully less, but maybe not), top off two cell phones (2 AH at four hours per day), and run the blender for a (5AH at one minute), and kettle for 2-4 minutes (7.5 AH) each day. By my math that's a little over 20 AH per day. Mixing in laptops if needed (camping situation - probably won't be using it much if we're out camping) I think should be another 2.5AH for two to three hours.

With a bit more context, does the system make sense? If not, what would you change or how would you design a system?

Thanks again! I appreciate it!

I got the Bonavita Bona Voyage as a gift recently and I think it may be what you are looking for. I like its small size and that the interior of the kettle is completely stainless steel (if you forgo the cap, the water will never touch plastic). There are a lot of reviews that should help you determine if this will suit your needs. Good luck with your search and your new job! [link]

I travel with this kettle: [link]

If flying, I take an aeropress, Porlex grinder, and small scale in my carry on.

If driving, I take my Clever Dripper.

They burn out if you have them plugged in even for a few seconds without being immersed in water, and if you leave them plugged in while the water is boiling: really hard to keep them functioning. If you can keep a thermos around, try instead the Bonavita travel kettle, which will take up about the same amount of space in your backpack.

I've been eyeing this for the same reason:

Or this immersion heater.

How small? If it's too little, refilling it may become annoying unless you have a source of water nearby- though a big kettle isn't exactly a solution since the water tends to go flat if you reboil it too much. How much can you spend? Is temperature selection important?

Anyways, if small is the priority, this .5 liter Bonavita travel kettle might do the job. It's small and simple, no temperature controls.

If you want something a bit bigger, and with temperature controls, there's the Bonavita 1 Liter variable temperature gooseneck kettle. I personally have the larger version of that kettle in my room for my desk gongfu sessions. These kettles allow you to choose any temperature between 140-212°F, can hold that temperature for up to an hour, have a built in timer that counts upwards up to 7 minutes, and the gooseneck is nice for pouring into small vessels. There is also a 1.7 Liter model without a gooseneck, and a 1 Liter gooseneck that only boils.

Then there's this 1.7L Cuisinart with 6 temperature settings and a 30 minute holding feature.

This Hamilton Beach 1.7L kettle is a cheaper option but it still has several features. Temperature selection between 150-212°F in 5 degree increments, a countdown timer, and a keep warm function.

I purchased a .5 liter electric travel teakettle...which is really easy to pack, and a travel mug with a built in filter for loose tea. This works just fine in motel rooms, but since I mostly travel for conferences, and I want my tea with me during meetings, the cleanup of loose tea is a but cumbersome. So, I'll also travel with some tea bags because that's easier to dispose of in a conference center or airport.

Here's a link to the teakettle: [link]

And another to the travel mug I use: [link]

I can't praise that mug enough. I used one of the similar Libre mugs for a year, with disastrous results. It leaked everywhere, and all the time so I could never actually travel with it farther than taking it to work on some mornings. This mug from Teas Etc. has yet to leak once...I have even thrown it in a bag, half full, where it shifted sideways accidentally. No leaks!

This guy keeps coming up as well, but I don't want the 900w load, and it's obviously very electric: [link]