What is reddit's opinion of Buck Knives 0110BRS 110 Famous Folding Hunter Knife with Genuine Leather Sheath?
From 3.5 billion comments
Created by @mouseofleaves.
As an Amazon Associate I earn from qualifying purchases. 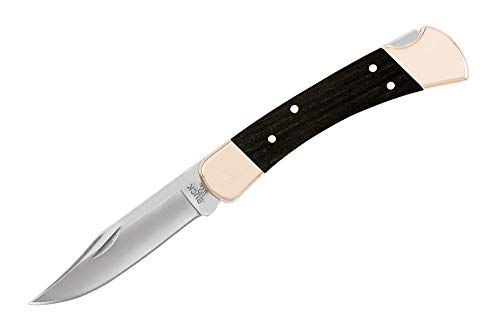 This product was mentioned in 22 comments, with an average of 1.14 upvotes

I'd choose the Buck 110 Folding Hunter.

US made, easily recognizable classic hunting blade, easy to use, has good quality and comes with a leather sheath for easy storage.

You could also engrave it to make the present even more special.

Really practical folder for a cowboy would be the Buck 110 Folding Hunter.

Time proven classic US made blade which comes with a leather sheath, budget friendly too.

Whatever you get for your friend - consider engraving it to make it even more special.

Will look good in any collection (even a high end one).

First of all - congrats!

Second of all, IMO the best knife to get as a present for groomsmen is the Buck 110 Folding Hunter:

Plus you could get it engraved and make the present even more special.

Buck 110 is a great budget offering.

Made in the US classic hunting knife.

I suggest taking at least 2 knives. the 6 inch boning knife suggest by u/well_here_I_am for quartering and deboning. and then something really sharp for cutting through the hide which is crazy tough compared to a deer especially around the neck. I used the classic 110 buck knife and made sure it was as sharp as possible.

we used the gutless method and deboned in the field and it worked really well.

Here it is on Amazon

I always thought his pocket knife was a Buck [link]

That depends on what kind of bang you want.

They are all great knives and very different from each other.

The Amazon prices for the knives I listed are not the best, but you specified on Amazon.

I think you use choose proven & simple knife like buck. [link]

With proper care, my Buck 110 and my Fender Squier Standard Stratocaster should outlive me and my son.

You didn't say what kind of pocket knife he had before. Something like a traditional folding knife. [link]

Or perhaps a folding knife that has a clip to hang on the pocket? Such as a spyderco delica 4 or spyderco endura wave, those have holes in the blade so the thumb can be used to open the knife one handed.

SOG flash II is also nice, it has a spring that assists opening quickly. ColdSteel Voyager is also popular, has a thumb stud on the knife to assist in opening it. Though I personally don't like their knives.

Fixed blade (look like a kitchen knife) can be strapped to a belt, and good for outdoor use. Morakniv Companion or Morakniv Bushcraft are both good knives for use outdoors, not really pocketable.

It is their signature knife.

edit: The 110 is cheap and durable. Good bang for your buck.

I absolutely love the leatherman wave. It is truly great. The only thing I don't like about it is now I don't have a need for any of my other knives. Also, I just purchases a sypderco tenacious here is why. It should be arriving today and I'll tell you how I like it. Another knife to consider is a buck model 110 folding hunter. If you read the reviews they will explain why.

Edit: Got my tenacious and love it. Highly recommend.

If you seek for the best value two handed knife under $50 - that would be the Buck 110 Folding Hunter.

Buck 112 if you prefer a smaller size.