What is reddit's opinion of Buck Knives 102 Woodsman Fixed Blade Knife?
From 3.5 billion comments
Created by @mouseofleaves.
As an Amazon Associate I earn from qualifying purchases. 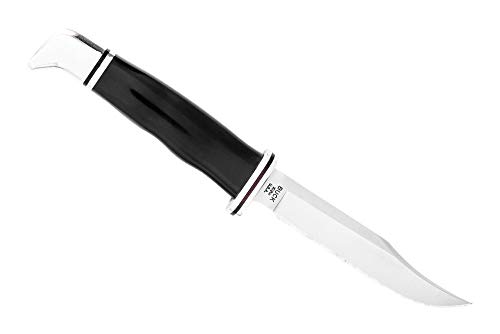 A few recommendations: As others said, the havalon piranta is quite nice. My only issues with it is 1) the blade breaks when working with large game, you have to learn to just use it for the first few cuts (mainly the outside), and then use a stronger blade for the processing 2) you need to use pliers to exchange the blades otherwise you'll be bleeding. I would recommend the havalon torch over this which has thicker blades.

A good overall knife for both big game and small game would be something like a Buck 110, which is super sharp out of the box and has been used for years by hunters. Or if you like the full tang knife style (easier to clean) then the Buck Woodsman, does a great job for both big and small game.

The only issue i have with ka-bars, and larger thicker blades (like boowie knives) is that when you're working in small areas then it can get a little tricky.

So if you're thinking of having a knife that will do it all, both large and small game, going with a narrower blade is the way to go. The woodsman and the 110 will do it all. The piranta can be tricky, and you'll need to carry pliers to replace the blades. I used the Havalons for a while because they are the sharpest blade you'll find which is also narrow, but then went back to the trusty Buck knives. If you don't mind sharpening a knife then they're great.

I really like the Buck 102 Woodsman. It is small and fairly light. The blade is extremely slow to dull.