What is reddit's opinion of Bulova Men's 96B104 Stainless Steel Dress Watch?
From 3.5 billion comments
Created by @mouseofleaves.
As an Amazon Associate I earn from qualifying purchases. 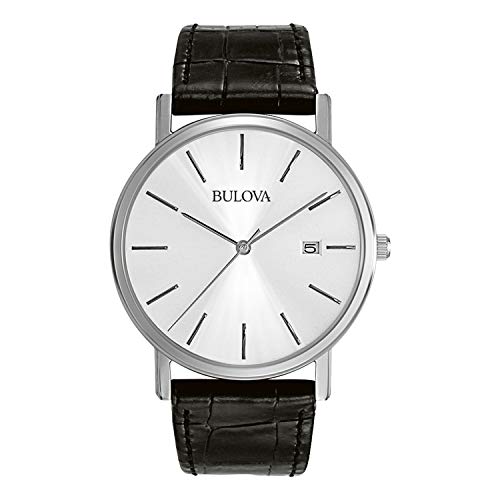 This product was mentioned in 30 comments, with an average of 0.87 upvotes

Which watch should I wear with a black suit? I currently have a black iWatch, but for some reason it just doesn't look as fashionable as say a standard black leather banded watch like this

I also have a silver chain - dark blue faced Bulovia as well.

The Bulova just sold, sorry! Here's a link to the Amazon page (this model is slightly different as they no longer use the Bulova tuning fork logo).

looking for a brown leather strap for:

preferably need one on the shorter side since my wrist is only 6.5 inches around

best to ask over at r/watches/ and they can most likely figure it out better for you. Under 100 dollars for a dress watch is going to be a hard find but doable. my personal recommendation would be Bulova 96B104. It quartz and a simple dress watch for formal occasions. [link]

I want to buy a new dress watch. Im really liking the seiko SARB065 (and the orient bambino a little less) but was worried they might look to big on my 6'' wrist. Ive seen someone posting this bulova model ([link]) with a 37mm crown, but im not too sure about it, as i never heard the brand before (im still pretty ignorant in watches and good brands, forgive me). Do you have any other recommendations?

Hi, so I got this recently for my brother (who's graduating) [link] because he was looking for a simple, quartz dress watch and I received it today. Is it possible for me to change the strap on it, since it's a horrible cheap quality, or should I just return it to Amazon and find a better alternative. If I should do the latter, is there anything you'd recommend (around the £50-60 range) from Amazon.co.uk, and if I should do the former, is there an easy guide on it, and where should I get the strap from. Thanks! :)

Can you clarify what you mean by "style wise you can usually wear almost any watch casually, whether you should or not is a different matter?" I like this Bulova watch (per RS_Curn's suggestion), but it clearly says it's a dress watch.

I think the two watches mentioned (the Stowa and Tissot) are both spot on. I could not agree more.

But to add to the discuss this bulova is a similar aesthetic and very affordable. Plus, it has a date!

I picked one up a few years back, when it only had the tuning fork symbol on the face. It looks cheaper now with the big BULOVA print now, but it is still a nice minimalist watch for sub $100. Just get a brown strap for it.

It's a quartz watch from a pretty cheap brand so yeah $100 isn't bad if you like it. Worth is gonna depend on if they are a "watch person" or not, where a watch that's $10k could be worth it.

Similar looking watches would be something from Skagen. Price wise should be similar, maybe +/- $20-50 depending on sale/style/promotions.

Bulova also has something similar.

Why do you like the watch? Minimalistic? Colours? Date required?

They are pretty good looking watches if you're going for a Bauhaus style. If it was me I would probably just buy a bit cheaper watch like this Bulova and buy the NATO I want from cheapestnatostraps.com to save $75 or so. Again, that's just my preference.

Any band recommendations for Bulova Men's 96B104

Looking for black leather with a different texture.

Can anyone recommend a simple quartz dress watch (<$250) in the style of the Bulova 96B10 and the Tissot T109.610.16.031.00 but between the 39-40mm dial range? I like the simple ticks on these watches rather than roman numerals or numbers. Also, I won't be wearing this watch too often, maybe only a few times a year so I'd prefer to have a quartz rather than having to wind the automatic every time.

Edit: I like this Mido Baroncelli but it is out of stock :(

Reposting this Bulova one last time before I get it fixed and then try to sell it haha.
$40 SHIPPED CONUS

Amazon link - [link] Listing this one as cheap. It is in amazing condition as I barely wore it. However, there is literally like a white piece of string in the dial, shown in pictures. Another user on my last post pointed out that it would be relatively easy to take out but I just don't have the tools or skills haha. I usually just shake it out of the way when I wear the watch. More pics - [link] [link]

Also selling the quartz Skagen showed in the picture! It is sized right now for a 6.5 inch wrist and I do not have extra links!! This was actually my first watch and it kills me to sell but I have not worn it in forever so figured it'd be better off in someone else's collection! It's actually a sweet looking watch IMO. Normal wear on the band.
$50 SHIPPED CONUS.

Will make a deal for both. Thanks!

how about this? Link

any suggestions for a watch strap for this:

This is a little smaller than what you're looking for but I really like it (it was the 2nd watch I ever purchased, about 4 years ago)

Here's an Orient that might be more what you're looking for.

What about a Timex Weekender (unless that's her current Timex)?

You should also be k the buyer's guide in the sidebar for the $0-$250 range. Straps can be purchased/swapped if you see a watch on a bracelet/strap you don't like.

Also, this Bulova may fit the bill. It isn't too masculine/feminine, it would work in a work environment, and it's quartz (most women I know/have met aren't as enthusiastic about mechanical movements). You can use the money you have left over to find a leather strap to put on it.

This This Or this are better qualitatively and still stick to your specifications. Please don't buy a shitty meme watch.

Hi guys, I'm currently interested in purchasing a leather watch for casual wear and I'm stuck between these two:

My budget is preferably below $100, and I just want this type of style. As a college student, I plan to wear this almost daily/casually with most of my outfits (hipster/streetwear-ish(?), I don't know how to define it properly). I don't have any preferences in brands or needs besides this type of simple style on the watch face.

This is my first time on the sub and posting, so if anything is wrong or more information is needed please feel free to ask/criticize. Thank you!

Orient Bambino - Slightly more, but a fan favorite here, plus it is auto.

Plenty of Seikos, Citizens, Skagens, etc that are around $100 and have a minimalist design. I am all for supporting new start ups, but only if they bring something new to the table.

In addition to the great selections provided by others in the thread, I'd like to toss some of Bulova's options into the ring. I have a Bulova 96B104 in black and silver like the one pictured, but they offer the 97B100 in brown/gold and the 98H51 in brown/rose gold as well, all of which are cheaper than the watch you're considering. They're standard Japanese quartz movements, nothing fancy, but I've never had trouble with mine and it looks both classy and classic. They're 37mm, which is a little bigger than the one you're looking at, and I think this brings it up to a modern size without stepping into "large watch" territory. It's quiet, thin, and lightweight to boot.

As others have mentioned, if you're happy with the way the watch looks, pick it up. No one's going to judge you for grabbing a Seiko - they're well regarded, even by watch people. The only person who you have to please is yourself.

I'm fairly new to /r/watches. Lurked for a couple months and finally bought my first watch last week. It's a Bulova Men's 96B104 Silver Dial Dress Watch that I saw recommended in a couple minimalist watch requests. I'm liking it so far, and am already considering my next piece. Probably with a metal bracelet to give me some diversity.

I don't have much knowledge of watch straps or what I want in a strap. That being said, I think your cane toad and alligator straps look badass. I had no idea that cane toad leather was even a thing.

Questions: Do people typically swap out straps themselves? Do people have a strap collection (on top of a watch collection) that they will mix and match with to the rest of their outfit?

Here is the desktop version of your link

Excellent suggestion. The only problem is that I already have this one

It is a very sharp watch, and matches the criteria well. It is thin, stylish, etc. Maybe I should just get them all one.

The following are also quartz, but less expensive:

I have this Bulova and definitely recommend it. You can find it new for $90 on eBay. If you're looking for a different strap color you can always swap it out and get a real nice on for $20-$30.

Ok, here we go. A bit more information to work with. You're looking for a watch in the style of Movado. Sadly, I think you'll have a difficult task with finding a watch that fits your budget and your specifications (that specific style, while not looking cheap). The watch you linked is a good example. It looks extremely cheap, and I'm sad to say I agree with the guys in mfa this time. But maybe this can be interesting?

I suggest you read a bit in our brand guide and our faq, check out a few pages of r/watches.