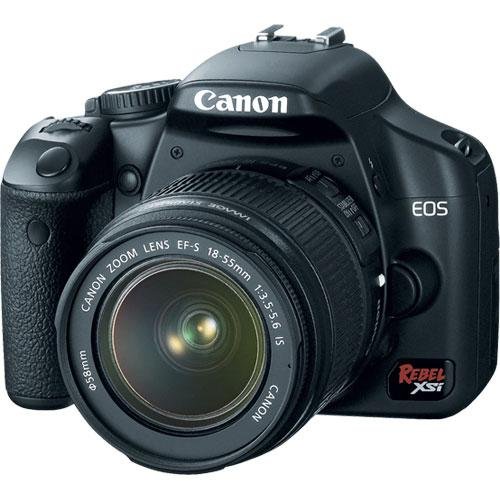 This product was mentioned in 8 comments, with an average of 1.00 upvotes

Currently I have something like this and a bag. Model is too old to shoot video and having issues.

Also have a basic tripod

Thanks! I have a Canon Rebel XSi and really like it (obviously blows any camera phone I've had away). It really is awesome the kind of stuff you can do nowadays with photography.. Most of the time I really just try and strive to model in a photo what can really be seen to the human eye but it's next to impossible. You just really have to be there..

This package is a very good deal. This lens is very flexible, works good for pretty much any situation but doesn't excel at any.

Hey, I am planning to get a simple dslr camera for class. I found two but i don't know which i should get. Camera 1: [link]

it's the lens that does it!

Where in the HELL did you get a 700 dollar figure from?! I spent 450 on my camera and pirated a copy of photoshop.

FOR INSTANCE: This DSLR is only 500 BRAND FUCKING NEW on Amazon, and that's with ten seconds of searching, and not even checking local craigslist posting or ebay auctions. Hell, Amazon even has it listed for 300 used.

And while the camera isn't strictly necessary, don't even fucking pretend that the value in having it isn't apparent, since the only reason we're bickering here is because of the PHOTOS OF SHELTER ANIMALS THAT INCREASED ADOPTION RATES. I would think that a moderate expenditure on a camera to greatly increase adoption rates is a pretty damned good investment.

As far as changing my argument, it's been the same the entire time, and that argument is that it's not that fucking expensive. The example I used of taking months to purchase a camera was a pretty extreme example of what one (1) broke college student can do with even a tiny amount of budgeting skill. I would assume that a group of adults in charge of taking care of and adopting out at-risk animals would have their shit together enough to budget for a fucking camera.

Hell, even if they did decide to save for 3 months to get the camera + software legally, assuming it costs 600 dollars total, it would take 200 dollars a month extra to get the camera. Assuming 3 thirty-day months, that's a whopping SIX DOLLARS AND SIXTY SIX(ish) CENTS A DAY. I've seen donation jars at shitty gas stations pull in more than that. All they'd have to do is put a jar at the front counter and a sign next to it explaining that they're raising money for a camera to get more animals into good homes. They'd probably have the money before the 3 months was up from that alone, not to mention the fact that almost no organization that stays afloat for any period of time runs such a shitty budget that the odd 500 dollar expenditure from time to time is gonna put them under. I've worked at animal shelters before, they're better run than that.

So where, in this wall of text, am I being dense? And where are you getting "highly expensive" from a $500 (MAXIMUM) purchase?