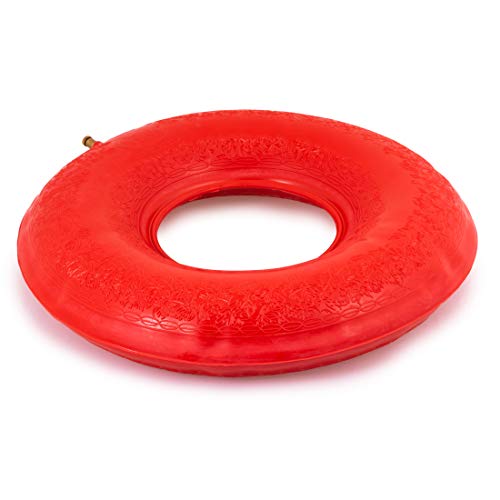 This product was mentioned in 5 comments, with an average of 1.00 upvotes

I had an episiotomy. This donut cushion is a butt saver. A bike pump (with the needle air insert) isn't necessary but I recommend it anyway since blowing on metal is kinda gross.

My guess is that it is a cover for the kind of rubber inflatable medical ring cushion that people are given for tailbone injuries.

I have no idea if I'm accurate here, but its the vibe that i'm getting. [link] these things

Thanks but instead of looking at the surface result again, I think you could've done more research. Here's the item on Amazon. As you can see it's not the highest rated option available which would've helped more. But thanks anyway.

I had a hymenectomy back in 2011 (at the same time I had a hysteroscopy and a D&C to figure out why I had been spotting for weeks at a time for over a year). Like you, I couldn’t wear tampons, and any kind of penetration was excruciatingly, unendurably painful. I had had several attempts at pelvic exams with various doctors who just...idk...gave up without comment when I had to call it quits due to the pain, until I finally went to an awesome nurse practitioner who took the time to examine me closely and noted that my hymen was unusually thick and rigid, like scar tissue. This meant that any manipulation of the tissue was causing it to pull and tear at the surrounding tissue, hence the intense pain. She’s the one who suggested I get a hymenectomy.

In terms of my experience with the surgery, I did have two other procedures done at the same time, so I was given “twilight” anesthesia through an IV which knocked me out with no memory of the procedure. (So, I don’t know if I would have just been given local anesthesia if the hymenectomy was the only procedure I was getting.) The surgery took about an hour and I took the whole day off to recover — IIRC, I went back to work the next day.

I was pretty sore afterwards for a few days, but getting an inflatable doughnut pillow to sit on really helped — something like this one. IIRC, I had gotten a prescription for pain meds, but the pain wasn’t bad enough to need them.

Tbh, when I had a follow up visit to my doctor a week later, I was still sore and in a little pain during my pelvic exam, so I avoided touching the area for months and months afterwards because I was afraid the surgery hadn’t helped me. But I shouldn’t have feared, because it did! I’m asexual so I can’t speak to PIV sex, but now I’m able to wear tampons without any pain. (I say all this to tell you I really don’t know how long it took me to recover fully, but I did eventually recover!)

[Also, as a side note, I had posted a very similar question to this one to a women’s Livejournal blog asking about experiences with hymenectomies, hysteroscopies, and D&Cs, and I’m so glad I did — no one at the hospital had told me that they won’t let you go home without first using the restroom and peeing, or that when you do, be prepared to see a horrific amount of blood in the toilet bowl. The LJ community told me that, and I’m so grateful they did, because there was SO MUCH BLOOD I would have panicked if I hadn’t expected it. But this was most likely due to the D&C, not the hymenectomy.]