What is reddit's opinion of Casio Men's W800H-1AV Classic Sport Watch with Black Band?
From 3.5 billion comments
created by @mouseofleaves 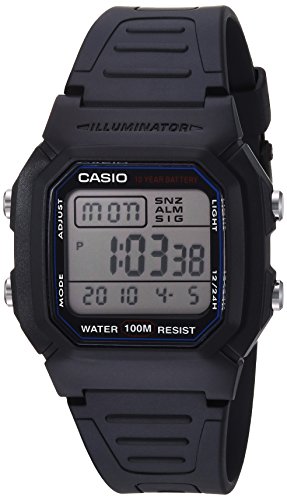 This product was mentioned in 35 comments, with an average of 1.60 upvotes

[link] Smash it into walls with my gangly arms, toss it into the bottom of my bag, surf consistently, it's been indestructible for me so far. Super nice to know what time it is out on the water. And if i break it... 12 bucks and I get a new one.

Cheapest bottom timer? If you literally just want to have a timer no depth or any of that a cheap watch will do the job. This one is good to 100m

G-Shock 5600GW. The entry level G-Shock and exactly at your budget. I own one. It's awesome.

Or this, a lot of watch for the money. Twelve bucks, damn. Casio Men's Classic W800H-1AV Sport Watch with Black Resin Band [link]

This one's pretty cheap and will last a while. I have been using mine for all SATs/acts/AP.

Yupp, I got one of these this year and the thing is indestructible. Can't beat the price.

If you're looking for something with GPS to record your sessions tho, not your guy.

This is my current watch, I have no desire for a huge faced watch, I don't want it to be metal. I am looking for an upgrade for this watch, functional, digital display, durable, reliable and with a nice simple clean look. Date and time are really the only features that are required, a stop watch feature would be a bonus.

I'm sure this isn't a watch that most here enjoy but I love my current watch, I just want to upgrade it in style and durability. Sometimes this watch will reset and I don't know why, I suspect it gets bumped and or it's just low quality.

I've got this one for $12. Guess you can call me a big spender

Hello! I'm fairly new to getting watches, and I have a budget of only $100 for now. I am currently in university, and I want to wear this watch whenever I go anywhere nice. this can include a nice place to eat, a meeting with a professional, etc. I am planning on getting a Casio W800H-1AV for the everyday watch that I need.

I like metal straps (stainless steel, silver, probably not gold though since it scratches off easily), but I heard that for my budget it is probably not a good idea. I have been doing a lot of looking around, but I don't know what to get.

Extra Info: After I graduate college, my parents are planning on getting me a more expensive watch, so I will not have this watch that I'm buying for over 5 years.

I only ever wear a watch when I go surfing, but I recently kept forgetting to take it off for a few days and actually kinda like the convenience. It was a cheap Casio, so now I'm looking for something that serves the same purpose but looks nicer for daily wear.

Some of my main criteria:

-somewhat slim form factor. Something I don't need to take off to put a shirt on, for instance. I don't want a behemoth on my arm.

-let's say $100 or under. Cheaper is better. I don't want to have to worry about keeping it safe. I could be convinced to spend more if it's truly durable.

-analog or digital are fine. I don't really need all the functions that my Casio has

I only can do this if I have a time how long I want to endure the pain. Otherwise I just quit. That's why I love my Casio Watch

Lol, I can't even justify it myself, but I think it'd be funny to wear. Most people would probably just think I was a weirdo though. I do need a watch for work with a stop watch. I don't think I would ever use a calculator on a watch, I like my TI-84 too much.

What about this Casio?

Does anyone know how feasible it would be to put a NATO strap on a Casio W800H-1AV?

I wear a Casio W800H-1AV all the time when I guard and teach. It has a stopwatch which I've used to time myself doing lap swims. I`ve swam tons of lengths, dove down 5m, and spent hours in the water with it without any problem.

It's 100m Water Resistant, the only thing to note is that the watch face can get scratched pretty easy. But it's really easy to use and it's cheap.

Absolutely love it and highly recommend it. Sometimes I don't know what I'd do without it.

I just have this for timing laps. [link]

I think the only reason I'd consider anything more expensive is if it tracked HR.

I use a Casio W800H-1AV Sports Watch when I work and I teach and swim with it all the time. It's water resistant to 100m. I've been to the bottom of some really deep pools and been in the water longer then most people (hours and hours) and never had a problem.

The watch has a stopwatch feature which might be what your looking for. It tends to get scratched a bit but I love it.

Would this be an okay watch for BMT?

How is tech school for 4A2X1? How difficult is it for someone with not much more than just some basic computer knowledge?

Is that watch the Casio W800H-1AV? If so, how do you like it? Considering buying one. Link of watch I think it is: [link]

I got a cheap Casio 4 months ago and it's still working fine and only showing minor wear.

Been faithful for several years now. 10 year battery. Has the date always displaying which is nice because I never know the date.

I also like I can just dip it in oxivir or whatever to get it clean without worrying about killing it.

Theres several similar iterations:
black/f-91w styling // black with gold accents // casio w96h, different look, same function // w96 in orange // There are other w96s as well but you get the point. They are only 50m water resistance as opposed to the w800h's 100m. Both great for the money and due to the similar layout I added them but i still prefer the w800 styling. All are very easy to read watches and might very well be the best watches available for 20 dollars.

Even though it's not a G-Shock, a simple Casio digital with 100m water resistance, like the Casio W800H-1AV would probably do the trick.

If he prefers analogues, maybe something like a Timex Expedition

Or a tough solar, solar powered ani-digi like the Casio AQS800WD. This watch has the advantages of both a digital and an analogue and does not require battery changes like most quartz watches.

My watch choices are probably super boring to anyone who's actually got an interest in watches lol.

I just have a fitbit sort of watch now. I really like walking...though I don't really ever make use of the fitbit to actively look at anything it's tracking lol. I just like that it's simple, slim, that it only lights up to tell you the time when you lift your hand, that you can customize the face, so I can see the date displayed at the same time, and chose how the date is displayed so it's easy for my brain to pick up the info (doesn't do well translating numbers into words...so it's good to have the day of the week and the month as their word rather than their number).

When I've had other watches I always just opted for a cheap and basic casio sport watch. I have this one now, but haven't really worn it much in a few years since getting the fitbit. But sometimes my fitbit will be unexpectedly dead, and I have to leave for work, so I'll grab this watch instead so I can leave the fitbit at home to charge. The one downside to the fitbit for me lol is that it can die and suddenly won't be displaying time until you charge it back up again. I get really paranoid about time, so this can be frustrating lol. I mean, I have my phone for the time too, but it's just annoying to pull it out of your pocket every time you want to double check to see if you're going to be early, late, or on time to wherever.

I had a simple timex watch ages ago, and really liked it because I liked the fabric band, and you could change the band out for other color or patterned bands. But it was a face watch, and by time I finally figure out the time on a face watch, it has been like three minutes and it is now a new time and I need to start all over again lol...hence why I opt for digital...I got that face watch just cos I really liked how it looked, not cos I thought I'd actually use it to tell time lol. I think I still have this watch too somewhere, I'm not sure.

Also, your cat is angelic.

Not a CAF member (yet), but I've abused this cheap one for a long time and it's held up

This is similar to the F-91, what do you think of this?

The Casio W800H is a chunky black budget sport digital that might appeal to you: [link]

Actually, don't even get a G-Shock. Just get this Casio, which is water resistant and has a light.

I picked up this Casio a few weeks ago from Amazon. [link]

I honestly don't know why so many nurses wear FitBits. You should already know you walk a ton at work; you should want to know your steps on your sedentary days! Anyways, most Fitbits are a pain in the ass to use for counting seconds (if a model has the feature at all) and they aren't waterproof, so you can't clean them, which makes them a fashionable petri dish that you slap onto your wrist every morning.

Just get a clean and professional looking watch with a second counter that you can clean. /r/malefashionadvice is a good resource for this (I assumed you're a guy because our surveys have tradiationally been male dominated on this). You can't go wrong with something clean and basic like this: [link]

Personally, I wear my Garmin Vivoactive because I already own it for tri training, it's washable, and I can decline calls from it if my phone is going off in my pocket.

It's hard to dress down a classy watch like that one. I'd just wear a different watch altogether. A basic digital Casio will keep a pretty low profile, and you can get them for the cost of a watch band.

The W800H-1AV, for example has a large time readout and high water resistance.

Or you can up the ante and get the basic G-shock that's built like a tank but will stay under the radar.