What is reddit's opinion of ClinicalGuard® HCG Pregnancy Test Strips (Individually-Sealed, Pack of 50)?
From 3.5 billion comments
As an Amazon Associate I earn from qualifying purchases. The following content includes affiliate links for which I may make a small commission at no extra cost to you should you make a purchase. 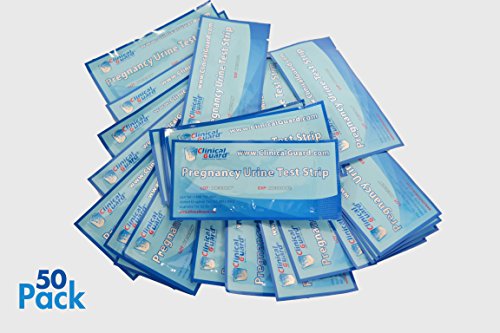 This product was mentioned in 19 comments, with an average of 29.47 upvotes

to piggyback off u/zelliez - amazon sells the test strips they use in clinics for ultra cheap and in bulk. You can get them bundled with ovulation tests too, if that's something you need

Because pregnancy tests in drugstores are expensive af, I found you can get super cheap pregnancy test strips on Amazon, 50 strips for $12! I have PCOS, so I never have periods, so I just use one of those strips every few months just to make sure. So much peace of mind :)

You can buy pregnancy test strips on Amazon for less than a quarter apiece.

If you are really paranoid about it, just test yourself whenever you feel anxious.

Dollar store pregnancy test are just as accurate as expensive ones and cost a dollar! You can also get 50 for $11 on amazon if you are the type to freak out every month.

Chances of getting pregnant from non-penetrative sex is really low to begin with. False negatives on pregnancy test are really rare. Having a full period while remaining pregnant is pretty unlikely.

Here's how you're going to deal with pregnancy anxiety in your future.

knowing whether you engaged in an act where you conceived =/= omniscience 🤣🤣🤣

They are pretty dang accurate. Im super paranoid of getting pregnant and needing an abortion so I bought mine in bulk from amazon. Super cheap and fast. You just gotta pee in a cup to use them. No plastic stick made them way cheaper than a drug store test.

If you have Amazon Prime... ClinicalGuard® HCG Pregnancy Test Strips (Individually-Sealed, Pack of 50) [link] They are the easiest and cheapest and have helped reassure me. But maybe waiting and just trying to keep your mind off of it is best.

Hopefully you don't need them again (at least not for a very long time) but if you want really cheap pregnancy tests you can get ClinicalGuard from Amazon: [link]

The prices fluctuate every few days, but they were $9 for a 50 pack when I bought them. Way cheaper than $1/test. People have done comparisons in this thread between ClinicalGuard and Wondfo (the competing cheap brand) and ClinicalGuard is definitely more sensitive.

Definitely worth going for the FRER at this point though!

No, but if you're worried about it and need to ease your mind, Amazon has bulk pregnancy test strips for very cheap.

For awhile there, I had the same fear as you, and I just took one of these every two weeks to be sure.

A couple of things. First, amazon offers pregnancy test strips way cheaper than drug stores. If you're the type of person to test often i highly recommend.

Second - If you're super excited about getting pregnant then it might be a good idea to distract yourself to lessen the pressure. Maybe take up a new healthy hobby to help prepare your body for all the changes? Or work on wedding stuff to distract yourself, I'm sure there's plenty to do :-)

First cycle using Ava bracelet. �� I used FF for a long while but over time started to genuinely despise temping. Temp drops would send me into downward spirals in the wee hours of the morning. My husband started to resent FF. My cycles were very regular and since I knew I typically ovulated between CD 12-14 (thanks to FF), we adopted fuck week protocol and stopped with temping some months back. I would encourage anyone starting out to jump right into temping because I regret not starting sooner but would also encourage anyone to stop it if it's making you miserable.

As for the Ava, I had an abandoned HSA account from an old job with a few hundred bucks and (for whatever reason) it's too big of a pain to merge it with my current HSA so I've been running it down. Ava is kind of neat but I assure you, you do not need this thing. It's overpriced for what it does, imo.

Nipples were mildly tingly but they were last cycle too so I didn't put much stock into it. Bloated and gassy before BFP but still did not register until after the fact.

I'm away on business travel this week and next. I got my BFP in a hotel bathroom alone on Wednesday morning. Thanks to the huge bathroom mirror, I got to see the big smile on my face. ��

BFP stands for big faint positive in my case because the line was there but no where near as dark as the control. I brought a few cheapie ClinicalGuard tests from Amazon with me on this trip. I took another test CD16 (Friday) and it was still faint as the first. Que deep panic setting in. Turns out there's a number of reviews on Amazon warning not to use these for line progression purposes. I have a FRER at home I can take when I get back. Debating if I should get a Clearblue Digital while I'm down here to show hubs when he picks me up from the airport later this week. �� ��

I had a miscarriage at 6 wks this year in April and had a very faint line on a FRER at DPO 16 then. Nothing like prior miscarriage to rob the joy of a positive pregnancy test. (This is why the faint line has me so terrified.)

I did get a fucking grip after I read this article so panic averted for now. A faint positive is still a positive. The line on a home pregnancy test isn't going to tell you if you will carry to term. It's just pregnant: true/false. Embracing the "today, I am pregnant" mentality and cherishing the bloat, gas, and increasingly sore boobs.

Husband was also taking the same only swap the prenatal with a Men's One-a-Day vitamin. We've been on this regimen for a while now. Hubs also takes Adderall.

Two back to back Mirenas, last one removed April 2017. Had not had my period for many years until ttc. Forgot how much it sucked. It took about 3 months to normalize after removal.

I switched to "pregnancy monitoring mode" or whatever and now I can't see what the chart looked like before that. :/ It said that I ovulated on CD 13 (Sept 26). OF COURSE, the one night I forgot to wear was a fairly critical data day CD 12.

Note that the temp rise is not very clear post ovulation. (Not as clear as I was used to on FF.)

I have been stressed out to the max with my job this cycle. So much for "just relax and it will happen". �� That being said, I have gone through a weird attitude adjustment over the past few cycles. Hard to describe. I stopped being so negative and also stopped being overly anxious about making things perfect. I drank coffee throughout this cycle and into ttw. I tried to get up from my desk and walk everyday. I didn't consider myself out immediately just because something wasn't optimal. I read somewhere on Pinterest, "You don't need perfection to get pregnant" and it really stuck with me. In the end, conception happens on the microscopic level and how you feel about it isn't going to impact much. So you might as just go with the flow. My husband helped me see this. He really helped lift me out of my funk.

I fly home on Thursday and wouldn't you know it, hubs and I have our first appt with an RE on Friday morning. (Nuts to think I made this appointment in August.) If everything stays good by Monday (Tuesday the latest), I'm going to call to cancel or reschedule a month out and see how it goes.

I would have been due in December with the baby we lost earlier this year. Hopefully I will be far enough along to make an announcement at the family Christmas party instead. ��

Sending my love and best wishes to everyone reading and congrats to the other BFP posters this week! There was a long time when these threads were too hard for me to read so also sending my love to those in that place too. ❤️❤️❤️

Edit: Looks like I am heading back to that place too... ��

First, double check this list, because it wouldn't be the first time teens have been lied to by someone.

Hop on amazon and get yourself some cheap pregnancy tests. If her home life or yours is chill enough, keep around a bunch. Even if you personally never need it, you can be the awesome friend who has cheap tests on hand if someone else needs them.

If she is pregnant, [link] may be helpful to get the pills.

For moments like these, I highly recommend getting a ton of tests for cheap from Amazon. I got 50 for like 10 bucks a while back and it's really helped me calm down.

I bought those and have used A LOT but never had a false positive, my friend also found out she was pregnant with one of them.

This one is for clinical guard. It seems like they dont have the 25-piece option available for now but they have the 50-piece. These are Wondfo.

For your cheap testing needs

Pregnancy strips are $0.22 apiece retail at amazon. No insurance. Link.