What is reddit's opinion of Cradle, Foundation: Box Set (Cradle Collection Book 1)?
From 3.5 billion comments
As an Amazon Associate I earn from qualifying purchases. The following content includes affiliate links for which I may make a small commission at no extra cost to you should you make a purchase. 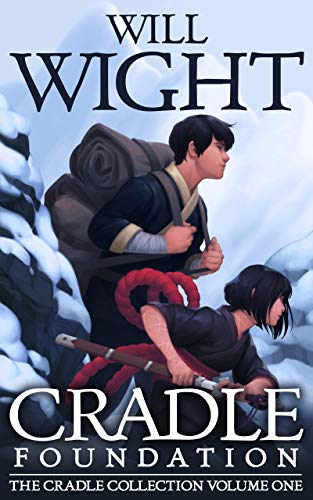 This product was mentioned in 21 comments, with an average of 2.90 upvotes

Been playing Everquest's TLP server with my brothers. Really fun. My brother just got crack, so we're all happy.

Dark Souls remastered is a bit silly. I'm running my SL 20 sorcerer that can only have +5 weapons through to get Dark Bead and blow up some lowbies. Basically just have to down Four Kings and Artorias. Shit is hard. The online community is huge right now. It's seriously the best its ever been in any Souls game because it actually fucking works for once.

New Path of Exile league comes out Friday. I took Monday off and am working from home on Friday. Doing some 10 hour shifts so I can get off work earlier, too.

Will Wight's new book also comes out Friday and the first three books in that series will be free on Amazon. If you like Wuxia at all, you should read it.

Wonderful series. For anyone reading this post who isn't a fan yet, here is where you want to start. The next book, Wintersteel, is likely coming out later this year and we're super excited about it.

Ha I assumed you were here asking for this specifically to hold you over between Cradle releases. It's an amazing series. Also it looks like the Kindle Box Set (first 3 books) is totally free right now! Long ass Amazon URL

For me book 1 was "Good enough to keep me interested/reading, but not extraordinary." Then I kept going, and it's now possibly my favorite series.

By the way, in case you are not aware, the Cradle: Foundation ebook (which is the first 3 books of the series in a single ebook) is free for the next few hours, be sure to get it before the deal ends, so you can see for yourself if it's for you without having to spend a dime. Here are the links:

The first 3 books in the Cradle series is free on Amazon until Thursday.

I noticed a distinct lack of Cradle in your list, so... that. Plus the rest of Will Wight's catalogue. I particularly liked the House of Blades series.

I don't know if he's ever been nominated for a Hugo, but Alastair Reynold's Revelation Space series is great (as is the rest of his bibliography).

If you've read Beware of Chicken you know that at the beginning the MC gives thanks to "Shizuko" for instructions on how to grow rice; the manga / web novel he's referring to is Sengoku Komachi Kurou Tan, and both are great if you can find them (it's not hard but is probably piracy I guess?). It's a fairly standard "transplanted into the past, now I gotta uplift" story, and the MC is believably hypercompetent (her grandfather is essentially Japanese Norman Borlaug and has ensured that she knows the history of agriculture inside and out).

If you liked Katalepsis but want something from the perspective of a friendly eldritch entity, you might want to try Eldritch Entity on a Journey of Self Discovery - it's kinda like Cinnamon Bun, except the main character is a friendly outside context problem. It's very new, though, so beware.

If you feel like a dungeon core story, NoDragons is back with OASIS CORE, which is set in the same world as Thieves' Dungeon.

Here are some other recommendations, in no particular order:

P.S. It's not progressionFantasy, but if you like Eragon you might like The Bartimaeous Trilogy, by Jonathan Stroud. I used to love both Eragon and Bartimaeous growing up.

some of the more popular ones:

Cradle: journey of a young man as he grows to become ever more powerful, first 3 books are free on Amazon right now:

Riyria Revelations, starting with Theft of Swords, follow the adventures of a warrior and an assassin with a mysterious past.

If you like RPG computer games, there is a whole section of fantasy and SF books categorized as litRPG or gameLit which are easy to pick up and are fun to read. Some examples:

-Everybody Loves Large Chests (can also be read for free online)

You may need to check your country's Amazon store:

If you want something that will blow your freaking socks off Will Wight and his Cradle series is a real page-turner that will not be put down. New book in the series drops today in fact. They are quick reads, but you crave more. He is a very active writer that puts out at least 2 books a year.

The audiobooks are fantastic as well but are hard to commit a credit to because they are pretty short.

I highly recommend this to EVERYONE!

If you want something a bit more difficult, in-depth, and rich take a look at the Malazan series. This series has a history that goes back millennia and spans planes of existence! However this series is very difficult to read, and Steven Erickson has a writing style that can take some getting used to. First book is Gardens of the Moon: https://www.amazon.com/Gardens-Moon-Book-Malazan-Fallen-ebook/dp/B002KYHZLQ/ref=tmm_kin_swatch_0?_encoding=UTF8&amp;qid=1569440277&amp;sr=8-1

Yeah, Sanderson writes phenomenal books. We can all agree to that. Very cool guy too. I am lucky enough to have some signed first editions!

Here's a link to the first boxset.

Here you go. No searching required!

My favorite book series is getting a new book.

Cradle by Will Wight. r/iteration110cradle

I'll probably give it a shot, but I admit, I don't understand the appeal of covers like this, especially for the first in the series. To me, it's far too...how do I put it? Try-hardy? On the nose? Edge lord-y? It looks like what you'd get from having a professional artist basing their art on a rebellious 14 year-old's sketch. "Look how COOL and BADASS and MURDER-Y I am!!!11"

Even the Arcane Ascension covers give me a little bit of that vibe, but this one is clearly going way over the top. It immediately puts me off, much like the harem LitRPG covers that are always [One badass dude in the middle + a hot chick of a different species on either side] I greatly prefer cover styles like in Cradle Foundation and Path of Gold: clean and understated - [link]

But hey, if it works for everyone else, more power to ya.