What is reddit's opinion of Crystal Clear Bar Table Top Epoxy Resin Coating for Wood Tabletop - 1 Gallon Kit?
From 3.5 billion comments
As an Amazon Associate I earn from qualifying purchases. The following content includes affiliate links for which I may make a small commission at no extra cost to you should you make a purchase. 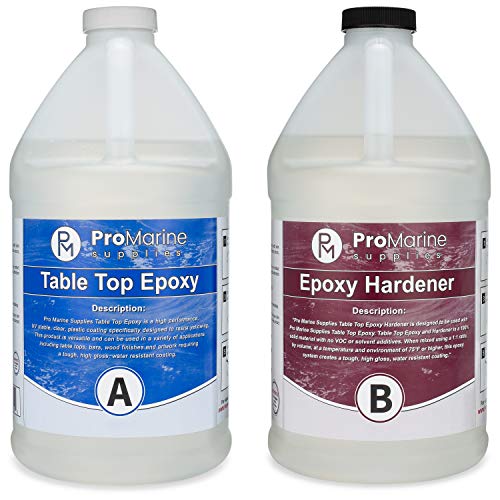 This product was mentioned in 37 comments, with an average of 2.22 upvotes

Crystal Clear Bar Table Top Epoxy Resin Coating for Wood Tabletop - 1 Gallon Kit [link] is a great and trusted brand. I’d advise going with a much smaller size though, unless you have more epoxy/resin projects you want to pursue.

White...not sure how that's possible. Literally any other pigment colors would work. White idk....

How much epoxy do you need? Order something off of amazon and overnight it. I used this with great results. Though for projects I really cared for, I would use west systems. Might not be easy to get a hold of west systems within the timeline.

Oh, don't use art resin, use something UV resistant and made for bartops. Popular brand on Amazon

If it isn't UV resistant, it will yellow and become brittle like older plastics often did, and I know the stuff sold at most art stores is NOT uv resistant.

With a little practice it's way better than using varnish. He's also, it would take a Jack hammer to damage your artwork!

this is what I'm using:

Sanded to smooth the piece out and release any really degraded chunks. Cleaned out any loose dust with the air compressor and wiped it down to remove any remaining particles. Fill, pour, plane, sand, sand, sand, sand...

Here’s what I’ve been using.

I tried adding the link via the app but it’s to long.

I’ve used it several times without issues. You have to always mix thoroughly and blast the air bubbles with a butane torch.

By “patchy” do you mean that it didn’t self-level? That’s a whole other problem. Especially if you’re putting new epoxy down over it.

I'm not an epoxy purist but I have had disastrous results with JB Weld. I've been using Pro Marine after being recommended it and its been fantastic. I haven't experiment with other types since this stuff works very well.

This is the one I get. They sell larger and smaller sets if that size isn't right for you.

Maybe it’s the brand. My first project (wasn’t as thick) but ended up turning yellowish. I switched to ProMarine supplies resin and it actually looks better. I’ll add the amazon link for it.

I used this resin from Amazon and did 1/4" pours every 4 hours until I got to the right thickness. It worked great but my room was only around 70 degrees and I got some micro bubbles that I can see (most people probably wouldn't). The color is just mica powder from a local arts and crafts store. Altogether it probably took me more hours than it should because of not having the "proper tools" for it.

And 5 coats of epifanes spar varnish.

It's a tough finish for moisture and sunlight and makes the wood look gorgeous.

Yep. Sand then a few coats of epoxy. I've used and liked

Depending on how big those gaps are you might consider taping underneath so it doesn't drip through.

Then some mineral oil. Good to go.

I've used this one few projects, its amazing. My fav project was a coin OP pool table rebuild, the veneer rails were broke, lifting and cracked, it was pine underneath, so I sanded down all the glue stained the rails and epoxy coated them.

I used that kit and only used half if it with like a 1/8-1/4" coat. On basically 2x6 rails all the way around the pool table.

Here is the exact resin I use I've found with careful control of resin temperature and slow mixing of small batches you can get a nearly bubble-free pour. These pieces are also 1x1x1.5" so they are quite small.

My initial test build had millions of bubbles but by changing a few parameters (dont store resin in the cold basement, mix with proper cups and a mixing spoon) I got something I was happy with!

Also this is regular clear epoxy resin just marked down for tables so that could be why they charge less for it.

One of the reviews has a picture of a table with bottle caps like you described. I just used this stuff for a different purpose.

Has anyone had any luck using different resin? Art Resin like /u/peterb77 used is pretty expensive for a smaller amount. I was looking on amazon and you can get a lot more for something like this [link]
This will be my first but hopefully not my last resin project.

And a blow torch to run over the top to release the bubbles. The bubbles are introduced from stiring the epoxy and just natural permeation. If you know someone with a vacuum chamber you can ensure ZERO bubbles.

Ballpark $200.. I bought the wood about two years ago and believe it was ~ $80-$100 2x6x8 walnut. The epoxy, tyvek tape, mica powder and a few other things I didn’t have were about $110. Here’s the epoxy and mica powder in case anyone is interested.

We actually ended up using a couple brands because we really underestimated how much we would need. So we started with this stuff from home depot and then ended with this stuff from Amazon. They both worked great. I think the part that made it look really good was using a heat gun to get rid of all the air bubbles.

Thank you! I use this one from Amazon :)

I buy from Amazon too. Usually this one resin brand

Here's 3.8L of epoxy that is shelf stable for 6 months after opening. 105$ Canadian.

And the finish is Rubio monocoat. It was my first time using it as a finish and I absolutely love it. https://www.amazon.com/gp/product/B00OA5V19K

Oh, I get it from amazon

I did a penny top desk a few years ago and used some from Home Depot. It was in the paint section. It was like $30 a box, and I needed 3 for my desk.

If I did it again I would get the stuff from Amazon sold by the gallon. Something like this: [link]

There was nothing wrong with the stuff from the big box stores, but from a pure cost perspective I could have bought that for less, and had a ton left over for something else.

After much nail biting trying to choose the right epoxy, I went with this ProMarine from Amazon:

Any experience with this —

This is what I have used. That pigment pack is enough for a couple of gallons of resin per color, significantly more if you are going for translucent.

[link] I used something very much like this at work.

It did great. Honestly I didn't do anything special to avoid that and it wasnt an issue. I used a 2 part clear epoxy ( [link]) and some powder pigment for the blue ( [link]). The filled areas were done in 4 layers though because it cracks when too thick.

are you talking about doing a full epoxy bar-top like finish, as in something like this. where you want a glass/plastic type look? Generally speaking as long as you follow the mixing instructions to the detail they aren't that hard, biggest thing that can happen is you'll get bubbles as the product cures. I wouldn't recomend using just the bartop stuff for the entire coat, maybe look into putting a coat or two of varnish, or more of a penetrating epoxy resin to seal it first. I think this can also help reduce the air bubbles. Regardless though on something this big you're going to get bubbles, so you get some kind of torch like this and go over the top with it as the epoxy drys.

For these type of glass/bartop look I prefer 2k poly as it can be sprayed and adding multiple coats is easy, stuff can be pretty pricey, but is cheaper if you are producing a lot of stuff for a big job rather than mixing up a bunch of epoxy. The fact that you can do multiple coats easily adds for more options in regards to glossy/sheen (they offer it from matte to gloss like any normal poly).

Now if the epoxy is for filling voids you want more of a structural epoxy (although I guess you could just fill a big void with the tabletop stuff, i've never tried), like a West systems or T-88. fill it a bit over the top, if you have bubbles getting trapped use heat or just do the large voids in multiple pours, bubbles usually congregate to the edge and often times just mixing it a bit more will get rid of it. One's like west system are nice because of their pumps that measure out the right ratio from the hardener and resin, easy to add color if you want, and after sanding it takes a finish fine and becomes clear again.

Those are generally the main applications of epoxies. reason I mentioned using 2k was because if you just want really durable finish because it will take a lot of abuse, there are other options. Also if you do want that plastic bartop, super high gloss look there are other methods out there such as just buffing a higher gloss varnish up through the grits, you don't have to deal with mixing or anything, can usually be applied easier with a brush. General finishes makes a bunch of topcoats that can be sanding, they have a high performance one that supposedly is pretty close to a 2k poly/conversion varnish, but you don't have to do any mixing and it can be applied by hand, although I've never tried it. I use their enduro-var water based urethane for a lot of residential jobs and get get a pretty gloss like look by buffing it up.