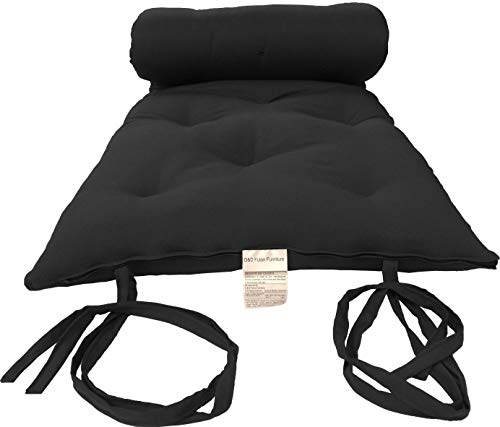 This product was mentioned in 20 comments, with an average of 2.50 upvotes

The one we have is this one

But theres others on google shopping and amazon. This one is polyester so very easy to wipe if the kids get it dirty something so i would recommend one with polyester. And the inside is cotton. They got pictures of Amazon too to show the size and what it looks like.

I have experience in this! We ditched our mattress 4 years ago this month. It took getting used to but now it's just as comfortable. That sounds like a lie but it's really true lol. I am also a side sleeper. I didn't want to invest much in an experiment so I got the ones linked below. I definitely want carpet under the futon so if you have wood I would recommend a think rug. They of course have thicker ones but I look forward to bed every night and it resets my back at night so I don't want to mess with a good thing.

I'm single, but let me tell you about my Heaven Bed. You might not find a more comfy option. I bought a shikifuton from Amazon and repurposed a 3" full size memory foam pad. The shikifuton is only wide enough for one person, so you would need to get 2 (it saves space over air mattresses). The luxurious part is taking the cheaper 3" memory foam, using a box cutter to slice it in half, double stack it... now you have a perfectly fitted 6" of memory foam.

It's more comfortable than my bed and is worth the price. The foam can be squished down to very little.

Craigslist is your friend for couches. I got a $3k (new) leather couch in good condition for $200 that way. That was one of many choices at the time, for no more than $400. It's long and comfortable to sleep on and I could probably sell it for $200 when I move. Add another ~$100 for a nice Japanese futon and you've got beds for 2 guests.

I recommend checking out the Japanese shikibutons. I had one for about a year and it worked out great for my small bedroom. There are models that can fold up into a couch when coupled with a special frame. There are ones you have to roll up every day to keep it from flattening too much.

I used a fake bamboo picnic mat to keep the bottom of the buton clean. It ran me about $80 US but well worth the money. I recommend, if say you buy a twin size, to buy the next size up for the fitted sheet. It will help keep the sheet from undoing itself.

I hope this helps! [link]

> Might need a thinner and/or lighter futon mattress. Anyone have any ideas?

I bought [link] as my in-house sleeping surface and it's wonderful. Dunno if they make double bed sizes, but for a single person it's great.

I slept on one of these for a few months and loved it. I slept with it on a carpeted floor, and I made a point of rolling it up every morning and airing it out every weekend and had no problems with moisture or mold.

I've also just tossed that shikibuton on top of camping cots and found it totally comfortable. That would give you plenty of air under it.

Unfortunately, my husband is pretty insistent on a larger bed and insisted on a regular mattress as well.

Memory type foam will not last 5-10 years, maybe a few years at most. Latex foam, on the other hand, will last up to 30 years, but also be extremely expensive. I think your best bet for durability vs value is a Japanese style roll up bed with mostly cotton batting, like this. Look up massage table coverings to find linens that fit. We have this particular futon for a spare bed and it works just fine with a twin size waterproof mattress protector. The futon is narrower and longer than a twin, but you can tuck the extra width under and stretch out the length (most mattress protectors are made to fit ultra deep mattresses, and this futon is just a few inches thick). It's long enough for a tall adult to sleep on. The width is not crazy - noticeably narrower than a twin, but still fine for a single reasonably trim adult.

If you do not roll or fold up the bed every night, and keep it directly on the floor, you are likely to get mold. I would definitely plan to get something that rolls/folds, and put it away every day. This also helps keep impressions from forming and will help it last longer.

I've never trusted air mattresses so I slept on this roll-up futon last year and it was amazing:

I've seen a lot of variations of this kind of Japanese mattress. Check out /r/minimalism and /r/vandwellers since this topic comes up a lot!

I used one if these for a year. Really comfy, and because it rolls up it’s perfect for a small room.

If she’s old school she actually folds up her bed and puts that away too... if not she probably just makes it the way most people do.

Well, Amazon has these Japanese floor futons that seem to get really good reviews, although they're more "rollable" than "foldable", they also have this folding mattress.

These are reasonably priced:

I had one of these for a while, and I like it a lot. My floor is bare concrete, though, so I have to layer it up with a few thicker blankets. Would probably also work to get two if you were in the same situation. It's a firmer, more rigid mattress. I like the rigidity of it. You don't sink into it at all, so you end up laying very flat. That was a big improvmeent over my last mattress, which was wearing out and getting a dip in the middle. I wouldn't mind it being softer, but that often comes at the expense of losing the rigidity, so there's a trade off, and I'm pretty content with it where it is. I also love to take it camping. It's not good enough on its own for concrete, but no dirt and maybe some grass? Perfect. I love it.

They do take a little bit of care, though. You have to pick it up at least a couple times a week to let the under side and the floor under it air out to prevent mold. Folding it up helps stretch and fluff the fibers back out to keep it comfrotable. Some recommend taking it out and beating it occasionally to fluff it and get dead skin cells out, but I haven't done that. You do definitely want to fold it up at least regularly. After a few days, it gets noticeably harder.

However, now that it's thoroughly tested and approved, I'm planning to upgrade to a similar one. [link] Here's a place I can get a fairly cheap king size one that's also thicker than the one from Amazon. I'm planning to upgrade the size and build a bed frame for it. Something with slats to let it get some airflow underneath it and help stave off mold. I'd really like to design something multipurpose, especially for if the mattress is folded and stored, but I haven't been able to come up with anything I like yet, so I might go for a simple platform with storage underneath.

Beans, rice, and veggies will keep you healthy for very cheap. I suggest frozen veggies for convenience.

You don't need a bed, I've slept on one of these japanese futons for about a year and a half and I love it, feels way better for my back than a normal bed. If it feels too thin, you can put a yoga mat under it for like $10-15.

If you have a traditional phone plan (t-mobile, att&t, verizon) it's probably a good idea to look into changing that (depends when your 2 year lease is up). Look into MVNO's. I pay $20/mo on Ultra Mobile with a $50 smartphone I found on SlickDeals.

Check on Craigslist for furniture and shit. There are often lots of desks for free that you just need to move. You can find someone with a van to move stuff on CL for cheap as well.

I'm glad I was broke because now that I'm earning like $50,000 a year, I can spend a lot of that feeding poor people and shit instead of buying shit that doesn't make me happy and contributes to the destruction of the planet.

No need to spend $300 on a japanese futon. The futon I own was $80 and is very cofortable (even after a year of use). Link for Twin and Queen

If you have hardwood (or carpet with little padding) you may need some tatami mats (or anything squishy you like), but on regular carpet these are just fine.

So this is the one I currently have

I've had back problems before and initially bought it for that reason, but now I have a hard time falling asleep on a traditional western bed. I'm a stomach and side sleeper. I think if you were a back sleeper the transition would be a lot easier. But I also learned that sleeping with another pillow for back support depending on your sleeping style was important too.

I've had no problems with my back since switching and can honestly say I'll never go back. (no pun intended) IMO, pay the shipping and invest in the shikibuton. It's the best purchase decision I've made in a long time.

Have you considered a shikifuton? Just roll it up when not in use.