What is reddit's opinion of Danby 120 Can Beverage Center, Stainless Steel DBC120BLS?
From 3.5 billion comments
created by @mouseofleaves 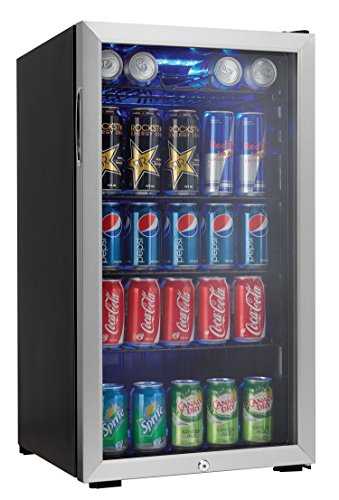 This product was mentioned in 14 comments, with an average of 1.07 upvotes

The biggest thing for me was realizing that most beers don't benefit incredibly from aging. Brewers often make the best beer from day 1 of bottling. Of course there are exceptions. If you want to start small, pick up a 4-pack of Sierra Nevada Bigfoot around January and drink one every year. Maybe pick up a few belgians as well; Rochefort 10 and St Bernardus 12 are pretty easy to obtain.

And buy some things to age short-term. People swear by Orval aged for a year or so.

And don't try to stock up like crazy. My mistake was buying a ton of high ABV beers and then realizing that they wouldn't be better after years of cellaring. Especially some stouts that began to develop unsavory flavors.

Like others have said, don't ever age something you haven't tried. It's good to have a basis for what you're drinking. If you trade for a rare beer--for instance--you don't want to waste time aging it for years and not know what it was like from the start.

I picked this beer fridge up and love it: [link]

But I used to just use styrofoam 6-pack wine shippers from trades. The extra layer of styrofoam protected the beer from temperature fluctuations and light a little better than just hiding it in my closet. 50-60 degrees is the ideal temperature, but beer (unlike wine) has been cooked. And it's fairly hearty, as long as it doesn't get too much light (giving beer the dreaded 'skunkiness').

Cellaring beer is a fairly new frontier, and there's not a ridiculous amount of data on it yet. I really enjoyed reading 'Vintage Beer' by Patrick Dawson. It's a pretty short read and has some vertical tasting notes that were really interesting. Also, you can always google 'cellaring (beer name);' occasionally there are decent results amidst the beer snobbery and name-calling.

I went with this one per some old recommendation threads I found on BA. So far it's been great, but I've only had it for a few days. The adjustable shelves are clutch, it took some finagling to find the right spacing (though I wish it was a tiny bit taller so I could fit large format on bottom and 12oz bottles upright on the bottom middle shelf).

The temperature is adjustable, but there's no display for what it's at, which is a downside if you want to keep them at a specific temperature.

Other than that one, I was also looking at craigslist -- if you want something bigger use the search term "True Cooler" and try to find an old one that a restaurant is trying to unload.

I haven't actually purchased one, but was also researching beer cellars to buy and this cooler gets good reviews from people using it for beer. The only thing to keep in mind for long-term aging is there's no way to control humidity, so corks will dry out eventually. If you're willing to spend I would buy a real wine cellar and modify it so bottles can stand upright.

My fermentation chamber is a Danby fridge with a glass door. If I turn my temp controller (STC1000) down to 0C, the lowest the chamber gets is around 5C/41F. I'd like to get this lower, I know the fridge is shutting off so it doesn't freeze things, the temp is turned up to the max. Any way to bypass/fiddle with the fridge's temp sensor or turn up the dial past max?

In this exact same situation right now. I was looking at that Danby 120-can as well, but if you're going that route, I've read to make sure you buy the updated version (there's hardly any of the old ones still around from what I've gathered, so it shouldn't be too difficult). Also, the shelving is grated and I don't believe there's an in-fridge temp reader, but you can buy glass liners and a reader separately for ~$10 more. FWIW, Amazon seems to be the best place to buy the Danby for price and convenience.

A couple weeks ago, however, I read a review singing the praise of the Sam's Club brand fridge, and the reviews on their website seem to say the same. It runs ~$179, and there was a three-year warranty option for a little over $20. I checked one out in person; the shelving is tempered glass, and it has a built-in temp reader. I don't have a Sam's membership, but I've read that you can purchase online and pick-up without it for a percentage of the cost. I have also seen that the company's customer service is very solid and easy. I might be leaning a little more this way, but I know it's entirely a preference thing. Cheers bud, good luck picking and let me know what you choose!

I have one of these. I bought it in December 2014 and it is still working perfectly.

I use one, I had to spin the light around to get the better bottle in there. If I take out the shelf, I can fit a corny keg in it too.

I use a reptile mat for heat. Also your beer might just be green, or your beer might have gotten much hotter than you think as it can heat up to 8 degrees above ambient temps while fermenting.

Check out Amazon, there are mixed reviews on this unit, and lots of pics.

Best Ive been able to find so far.

Yes that's probably the correct term. I also found this one that looks pretty nice. Thanks for the info

The current top contenders:
Danby Beverage Center - Looks good, but a friend had one that just failed on him. He also said it stayed too cold, the thermostat might be unreliable.
Koldfront - May not fit bombers?
NewAir 28 Bottle - Highly rated, but apparently is an energy hog.
Haier 12 Bottle - May be the best bet, a little more expensive but well reviewed.