What is reddit's opinion of DownBeats Reusable High Fidelity Hearing Protection: Ear Plugs for Concerts, Music, and Musicians (Clear Ear Plugs, Black Case)?
From 3.5 billion comments
As an Amazon Associate I earn from qualifying purchases. The following content includes affiliate links for which I may make a small commission at no extra cost to you should you make a purchase. 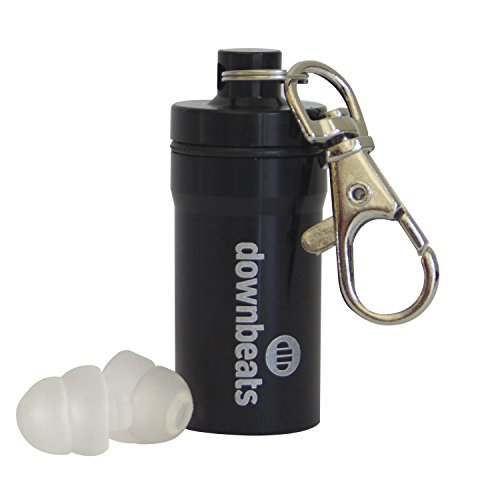 This product was mentioned in 49 comments, with an average of 2.29 upvotes

I've never had a bad time with these and they're almost a third of the price.

Edit: but yeah to echo what others have said, don't skip the earplugs. The music is still stupid loud and you can be comfortable right in front of the subs with them. If you value the experience of going to a music festival don't ruin it for future you by fucking up your ears.

A word of caution, especially for older (and generally) louder planes. The QC35s do not have the same level of noise reduction as the A20s, and you're likely to experience some hearing loss. For the budget minded, you honestly are going to have trouble beating an old fashioned DC set with a pair of something like these under them: [link]

Also super useful for when you're sharing the ramp with jets :)

Downbeats are another good, inexpensive option. They come with an aluminum keychain case and don't stick out of your ears, which seems to be a love/hate feature. $13.95 on Amazon

These are the shit.

Hah! Should've checked my Amazon orders - downbeats was indeed where I too landed:

I second that. I have permanent hearing loss from going to hardcore and punk shows without ear plugs when I was an idiot teenager and in my early 20s.

I use Downbeats earplugs, which are cheap at $15, work perfectly, and have a nifty carrying case so you don't lose them. You can still hear the music really well, it's designed to let more of the highs in, but it takes away that roar that kills your eardrums.

I have these by a brand called DownBeats [link]

My wife was attending Orange Theory Fitness for a while and always complained about the music being painfully loud. I got her some earplugs that are meant for concerts and they apparently helped a lot without seeming as silly as foam ones or totally blocking out the music: [link]

I have downbeatsdownbeats ear plugs and I'm a huge fan. I'm really sensitive to sound so I actually keep a set of these on my keys and end up wearing them at bars, sports games, etc. all the time.

I’m experiencing this now. From what I understand, being already stressed exacerbates the trigger response. My wife’s saliva sounds are particularly noticeable and she gets closer than anyone else. We’re both still figuring out how to accommodate this.

I’ve been recommended these: downbeats by others on this sub. I’ve ordered them but haven’t tried yet.

Try talking to your primary care physician/GP and if they don’t get it, try to get referred to a psychologist or google misophonia doctors in your area.

Got these in 2019 for concerts and they are still going strong. Use them every time I ride, can clean them by just submerging in hot water and wiping them off. My issue with a lot of other plugs is the little stem part pushes up against my helmet and makes it uncomfortable. These don't have that problem.

Having the case clipped on to my keychain doesn't hurt.

There are those who like it really loud, 🎸. I don’t understand either. What has really helped me in similar situations like this, is using my AirPod pros, I specifically got them because they have a noise cancelling feature.

While I always didn’t have these nice headphones I always carried with me earplugs. Some like these.

I checked for silicone ones because I had a colleague that wore them for a while post-concussion. I’m not sure what brand she used, but these ones have a good rating on Amazon - they block excessive sound while still making it possible to hear someone who is speaking to you: [link]

Spot on OP. Check out a cheap option that works great:

I got some of these: [link]

They are so tiny and discreet that most people never notice I have them in. They cut the volume level in half. Just used them to survive a long car ride with my two toddlers, who were excited because we were on our way to adopt a dog at a very loud pet store (also kept them in for that).

Visually, still no tricks I have found! I wonder if there are contact lenses that reduce vision :)

Honestly, not really, I guess just expect it to get PACKED to the point where you have no room to really move a foot in any direction, it WILL get crowded, sweaty, and sometimes hard to see.

The only part of my night that sucked was standing next to a guard rail and being smushed between the rail and people, especially during the moshpits (which are fun as hell btw)

I also HIGHLY advise picking up earplugs if you don't own a pair already. You might think its not that loud during the starting artists (ie, Monxx, Liquid Stranger, sometimes Dion Timmer) before Excision starts, but he REALLY cranks the volume. During the intro/opening for Excision, everyone moved back a good foot, and just froze before cheering, it was LOUD and my ears were ringing a little before putting my earplugs in, but it was epic af and the bass was something out of this world!

So yeah, any further questions, don't be afraid to ask!

Don't forget, if you go, the most important part is to be laid back, feel the music, headbang, and just have a shit ton of fun!

Lots of people are suggesting expensive options, if you want something budget friendly (15 USD) that does pretty well, try these. I do audio for live music full time, and use them a lot.

If you're sensitive to loud noises, make sure you're inside a building during the fireworks, and stay away from the rivers during Fantasmic!. Indiana Jones, Splash Mountain, Haunted Mansion, and Pirates can all be considered loud.

Consider getting some of these (or something similar): [link]

Disney has some pretty dang good shows, rides, and music- not to mention the audio equipment is all top notch. These are designed for use in concerts, but preserve the audio quality, so it won't sound muffled like it would with normal earbuds.

I use these. I like them because they aren't super noticeable and don't protrude out from your ears. They also come with a case I just leave clipped on my festival backpack.

Other people have suggested noise reducing ear plugs. I haven't tried them yet but I'm likely to order these [link] . There's also plugs with different inserts so you can kind of control the volume I believe. But these seem to be less conspicuous.

Right now I mostly use headphones to either stream video game music from youtube or white noise from the relax.io app on my phone when I'm trying to focus. I may be causing hearing damage from turning up the volume when it gets particularly noisy. I'm not entirely sure if that's a good or bad thing.

I have a pair of DownBeats and they're amazing. Been going to EDC for 6 years and can vouch that you definitely still get the full experience (just without the post-festival ear ringing). The little case is clutch, too!

Anyone saying they just play music over it is losing their hearing quicker. This was my first pair, give them a try. Even comes with a little container to clip to your keys.

Don't use single use earplugs made for the job site. They block too much sound and ruin the live music experience.

Search for ear protection for concerts and you'll find a half dozen brands between $10-40. I personally use these: [link]

Start with the cheaper ones and if you don't like them move up in price. But definitely take care of your ears!

Invest in some decent earplugs:

Just search around Amazon or any other shops, so you never have to worry about it. Even if you're not going to a ton of shows, always bring them and wear them. Getting some decent ones kind of makes you accountable. At the least get the squishy foam ones.

See you at the Maverik Center.

Get good ear protection--learn him early.

I use custom molded earplugs, but I also keep a pair of these on my keychain:

I love going to Dolby screenings, but they are almost always waaaaaay too loud for me (previews and movie). I remember being in physical pain during John Wick 3. I've taken to keeping these on my key chain specifically for AMC visits.

Downbeats! They’re like $13 on amazon and come with a little case. I’ve never had them fall out and forget they’re even in.

I recommend these ear plugs from amazon.

Since I got them I’ve taken them to every concert and they’ve saved my ears from a lot of damage.

Does anyone have a recommendation for a good pair of earplugs? Just did an amazon search and these came up, probably looking for something under $20: https://www.amazon.com/gp/product/B00A3Z44R2/

Use Down Beats! Meant for this specifically - quiets down the sound spectrum evenly

this is the brand i got. they're acoustic, so you can still hear people talking. they're great.

I would order them now, as another has said. Ive used a pair of downbeats for a couple years that I enjoy. [link]

I wore these last year and it sounded great.

that would be pretty cyberpunk!

does your other ear have any damage and that's why your cyborg ear sounds better or it just does?

I know what that's like. I have hearing loss and tinnitus and hyperacusis so noises that are even a little bit too loud cause pain. It blows cause I really like listening to music live so i've made the habit of carrying earplugs with me at all times.

I always use ear plugs for loud environments, now I use DownsBeats and they are practically invisible.

Another thing that has helped me is to buy a couple sets of discreet ear plugs which fit in a small case that clips to my keychain. I have 2 keychains and a pair of earplugs on each. Most of the time I have a set of keys with me (work or personal) and thus I will have the ability to pop them in whenever I find myself in a social setting and it begins to get too loud.

It's really important that I do this because when I expose myself to loud noises, my tinnitus rings louder than normal for the next few days. The earplugs have really helped.

But these also look promising:

these. I've had three pairs. love them

I've also tried Etymotic Research ER20. They're too stiff in my ear and I didn't like the stem poking out. I like to mosh at shows. The sound was also softer maybe? Maybe less bassy.

You've got to buy these: [link]

They protect your hearing, but don't muffle the sound at all.

DownBeats is what I use and they work great. I don't ride very often without them.

Depends how close you get to the speakers... and how good the roll is... I always bring some. [link]?

Any time! I have these and love 'em.

Pretty sure someone mentioned these before

One of my friends was a grad student getting a degree in the Clanga. I bought him a pair of hearing protection ear plugs off amazon. He swears by these things.