What is reddit's opinion of Energy Generator Orgone Pyramid for Emf Protection & Healing- meditation orgonite pyramids/crystal chakra?
From 3.5 billion comments
Created by @mouseofleaves.
As an Amazon Associate I earn from qualifying purchases. 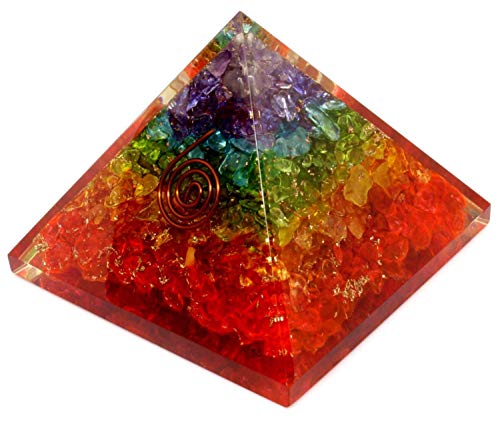 This product was mentioned in 2 comments, with an average of 2.00 upvotes

Do you want the real answer or the pseudoscience claims? This sales site says this: >Orgonite pyramid helps to filter and balance energy fields in our environment and can aid in strengthening your energy body by converting low frequency energy into a higher frequency that is more beneficial for life forms including yourself, pets and plants.

>The orgonites with Multiple Wave Oscillator (MWO) by Lakvovsky: • Saturate the cells of the body with energy. In turn the chemical processes of each cell are brought into balance allowing proper repair and operation • When you use the orgonite with MWO regularly it maintains the electrical health of the body at a cellular level. All chemical processes in the body require energy to take place and the orgonite with MWO feeds the need.

Hope that explains it :)

Making them is pretty straightforward, depending on how much work you want to put into it.

It's pretty much, resin and metal in as close to a 1:1 ratio as possible, and then the addition of some quartz crystal. The one above is a copper coil design that's popular ( http://www.growingempowered.org/wp-content/uploads/2016/02/The-Ultimate-Truth-About-Coils.pdf called a SBB or Cat Coil), and then a quartz crystal point, all encased in epoxy resin.

The picture above is a test with water/ice that people commonly do to visualize the supposed energy radiating from the orgonite. You can see the banding of trapped air on the bottom left of the pic. This pattern seems to be pretty consistent to the pattern in the coil. I've used different shapes and materials for containers and they seem to be consistent with what Wilhelm Reich was describing for orgone (metal reflects life-force energy, and organic compounds like resin, attract), as well as the notion of a EMF or scalar field surrounding the device.

Which is kinda what these are advertised to supposedly do (read the amazon reviews).

I've also noticed weird fields around the orgonite whenever I swing a magnet or a pendulum over them. Which is more noticeable on the coils in the orgonite, than just the coil just by themselves. Also, The coils are said to coincide or flow with the energy coming off the chakras, and I've noticed a more present energy from the SBB coil pendants I've made, than other metal shapes.

The quartz comes into play with the piezoelectric effect. When the resin shrinks, it puts pressure on the crystal, having the effect of electrically charging and polarizing the quartz. This is supposed to help generate a subtle energy field around the orgonite. Quartz movement watches use the inverse of this effect, they apply a small voltage to the quartz, which vibrates at a known frequency, detected by a micro tuning fork, resulting in precise timing.

To be honest I don't know exactly what's going on, but I'm trying to get a better idea. I do know that my sleep has gotten astronomically better since I started making these (which just kinda happened after the fact, I didn't intend for that to happen).

I've also noticed a dramatic change in my temperament, like I haven't been very anxious or very depressed since then, and my mood overall seems to be much more stable, or at least more in line which what I perceive to be "healthy emotions". I've also found meditation to be much easier recently and I have been more clearheaded.

So anecdotally I really feel like something important is here, even if it could be placebo. I used to scoff at the idea of EMF and how a little trinket made of quartz, metal and resin, could transform the energy of a space. But now that I've spent some time investigating, I do think something real is occurring, even if we can't see it.

To be fair, I am considered to be a HSP (Highly Sensitive Person) so I often pick up on or annoyed by sounds/lights/smells that others don't initially notice ie. the electronic buzz coming from a cheap power supply. So I'm a bit of a outlier in that regard. I also have a cellphone tower 100 yards from my bedroom, so I'm partially thinking that has something to do with my sleep quality. (Even if we're told it's safe)

The more I look into this too, the more I see overlap between cultures in regards to "life force energy", and how their descriptions line up. Prana, Qi, Reiki, qi-gong, orgonite, all seem to be point to the same thing. So that pushes me to see how people have tried to understand them though time.

If anything, the backstory of orgonite is fascinating (depending on who you ask). Pretty much the government destroyed all of Reich's work, equipment, etc., after he failed to follow a court injunction to stop research, and threw him in prison where he later died a year later in 1957. (read the article above)

In my eyes, It's one of the bigger successful cases of government censorship. Even now the NRC (Nuclear Regulatory Commision) has made etsy take down postings that refer to orgonite.

>... I was shocked to open an email from Etsy the other day, informing me that some of the items in my shop had been deactivated. The reason given was "These items were removed in accordance with a notice that we received from the U.S. Nuclear Regulatory Commission, as well as Etsy’s Prohibited Items policy. Etsy prohibits items that present an unreasonable risk of harm or that violate safety regulations. This includes (but is not limited to) radioactive items and nuclear materials. "

So that's pretty interesting too.

That might have been more than a ELI5, so if you made it this far I thank you.

TLDR: Orgonite is easy to make, has has lots of positive anecdotal evidence, and a very interesting backstory.