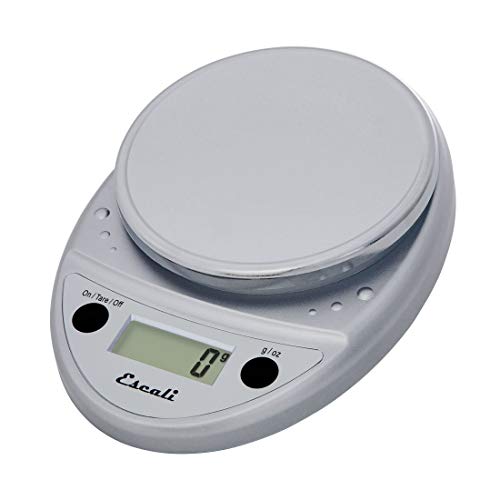 This product was mentioned in 16 comments, with an average of 1.00 upvotes

I think a scale and calculating your macros would help a ton! I'm new to keto. This is my second week. I bought an Escali scale. I put my plate on, add whatever I'm eating and document it as I go. Kind of a pain at first but I think it's been helpful.

I think a scale and calculating your macros would help a ton! I'm new to keto. This is my second week. I bought this scaleEscali scale and it's helped a ton. I put my plate on, add whatever I'm eating and document it as I go. Kind of a pain at first but I think it's been helpful.

I just have a fairly cheap one. probably from Target, but I don't remember. It's Taylor brand and it's been going strong for quite a few years now. I like that it's kinda high and the top surface is glass.

Carla Lalli Music from Bon Appetit recommends this one, which is still fairly reasonably priced. Ordering from Amazon might be a bit slow these days though.

This isn't the cheapest, but it's not too expensive and will last a lifetime. We use these in the kitchen I work in [link]

We swear by these ones, they're inexpensive, accurate, and durable. We've usually got 5-6 on hand, and I'd say we only trash one a year...

And I don't even remember the last time I changed the batteries...

Maxes out at just under 5lbs though, so might not work for OP.

I have this for food and can recommend it. Works well, cleans up easily, waits four minutes before it shuts itself off, uses normal batteries, and it comes in lots of colors.

I cannot recommend my weight scale, as I have to step on it, like, four times in a row to get an accurate reading.

Surface area does help. I have this one, I really like it but plates cover the numbers a little bit.

I like the Escali Primo that I picked up for a hair over $20 from Amazon. It does everything I need it to do and is really easy to use. (I got the cute red version.)

(On the other hand, I had zero difficulty in Googling food scale and finding tons of options, so if you're asking for advice on fittit, maybe you have particular requirements?)

Those all seem so complicated and bulky.

It comes in 7 different colors!

I like the Escali P115C kitchen scale. It has a 5kg capacity and a resolution of 1 gram.

Get a scale, like I did, such as these:

I use a Primo Escali scale. I've had it for 5 or 6 years now (purchased it for following European recipes, and have repurposed it for food tracking more recently). It's held up great, no fuss, and the batteries last a really long time. I do think I paid a lot less than the $30 it is currently listed for on Amazon though.

Don't know anything about a Bullet Journal. A lot of people here use MyFitnessPal - personally, I prefer SparkPeople (lets you set a calorie range rather than a single daily target, easy to save favorite foods and groups of foods, easy to enter your own recipes, syncs with Fitbit, but has some social media and advertising aspects integrated with it that can be off-putting).

My boyfriend is on his own for food making choices, so I'm no help to you there! lol

And as for food containers, I prefer glass to plastic for its ability to be microwaved without staining or leaching. Wide mouth 2 cup mason jars work really well for soups/stews/chili, and since they are designed to be airtight they don't leak at all. And they are cheap! You do have to remove the lid to microwave, though.

For larger meals (salads, meat and veggie leftovers, etc) Pyrex and Rubbermaid sell glass containers with plastic lids in a wide variety of sizes and shapes. They're a bit more expensive than the canning jars but glass holds up well so it's worth the investment, IMHO.

Escali digital Scale is the one we use at home and my mom used these when she was in culinary school.

The Escali Digital Kitchen scale is great. Been using it for more than 5 yrs. [link]

You kinda sound like me, with the perfectionism and needing to make "real food." I had that adjustment when my husband and I moved in together: it was a combination of having to learn how to cook along with the feeling that we had a kitchen and were building a home life now and maybe college-type takeout every night wasn't going to cut it anymore. I've since learned to cook (one of my hobbies now, actually), but that sent me into making ever more complicated dishes, which, you've clearly noticed, is a complete pain in the ass to constantly calculate. So, I've decided that to make this work, I need to simplify. I'm forcing myself to make really, really simple meals instead of the more involved stuff. I love cooking, but I was getting burnt out on calculating long lists of ingredients (and I'd get hung up on recipes that came with calorie counts that called for, like, a whole wheat hamburger bun. "Which brand? How many calories? This one's 120, that one's 200! Now I have to calculate the whole stupid thing myself anyway!"), so I've been hunting around for 2 and 3 ingredient meals, and reminding myself that protein + veg is pretty simple, I can just switch up the flavorings.

I saw in another comment that you haven't been weighing your ingredients. I HIGHLY recommend getting a food scale and doing that. It's ridiculous how much more helpful and accurate that is. I have this one, and I've had it for years. I don't think I've even had to change the batteries?

I also recommend looking into /r/MealPrepSunday. I don't do it allllll the time, but it is nice to get all the math out of the way one or two days a week, so you're not overwhelmed the rest of the time. I'm cooking dinner this week but I prepped all my lunches on Sunday, so entry into MyFitnessPal is super-easy.

So, simple stuff: I'm one of those people that can't eat the same thing five days a week, but I CAN do leftovers, so I'm making lots of 4 and 6 serving meals that I can reheat, which means I can just copy MyFitnessPal entries from one night to the next. We've been doing stuff like this Cheesy Garlic and Herb Brussels Sprouts with Sausage (Laughing Cow + a pack of Thin N Trim sausages + premeasured container of Brussels sprouts = me not having to do much re: weighing and counting) and this Two Ingredient Sausage and Broccoli (okay, I added beans, but still). Yesterday I grilled some pork chops and veggies, had some watermelon on the side. Today I'm throwing some precooked chicken and a bag of frozen vegetables into a pan and making a stir-fry sauce. I bought some EVOL burritos and I'm probably going to make a side salad with those tomorrow because that means I don't have to think much about any of it. Right now I'm just focused on fitting my calories and maybe not going psychotic with sodium, so if that means a frozen bag of gyozas from Trader Joe's and a sauteed bag of baby spinach, so be it. My husband's not going to divorce me because I heated up frozen burritos for dinner once in awhile. I'm trying to keep things relatively low-carb and low-starch if it's not prepackaged, just because if I AM slightly off with my vegetable weight, it's not generally going to make that much of a caloric difference.