What is reddit's opinion of Farscape?
From 3.5 billion comments
As an Amazon Associate I earn from qualifying purchases. 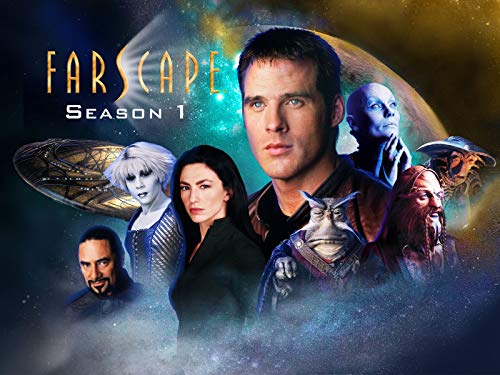 This product was mentioned in 4 comments, with an average of 1.50 upvotes

Aside from POI (which I forgot to mention is on Netflix) they're mostly second-tier or short-run shows, which is probably how they slipped under the radar. I enjoyed them a lot, though. If you don't mind older 4:3 shows, Amazon Prime also has <em>Farscape</em>.

Well Felicia Day's The Guild recently did a few games of DnD that has more dicks in it than you thought possible and is basically a Legends of Tomorrow version of Critical Role. The rules kind of matter? For the most part it's just insanity and giggles, super light hearted, and not serious at all.

For seriously stuff just go watch Critical Role and be prepared to cry....and then probably fall asleep because it's like 4 hours of joy every Thursday night.

There's also Castlevania on Netflix, Cowboy Bebop on Hulu, Violet Evergarden on Netflix, Godzilla: Planet of the Monsters on Netflix, Legend of Korra, The Rising of the Shield Hero, all of Farscape on Amazon, Motherland: Fort Salem on Hulu, THE MANDALORIAN on Disney+, Stargirl on the CW/DC Universe, pick a random anime on CrunchyRoll to see if you're intrigued or disgusted but intrigued, Carole &amp; Tuesday, Drive to Survive on Netflix, Your Name which is just...I mean...I cried...a lot but in a good way, The Secret World of Arrietty, When Marnie Was There, RWBY on Roosterteeth, HARLEY QUINN on DC Universe, annnnd....for the final tv show.....good old fashioned Babylon 5 reruns on public over the air tv.

Books: Matthew Swift series by Kate Griffin and most of her work in general, The Quantum Thief series by Hannu Rajaniemi, The Long Earth series by Sir Terry Pratchett and Stephen Baxter, anything by Ian Banks, and various comics that include Letter 44, Astro City, Hellblazer, and Global Frequency.

Games: A gem of a game that I've been following has been ECO which has a big update coming in a few days buuut there's so many tabletop games to pick through and I've already listed enough TV or streaming programming to last you the rest of the year.

Dude.. this show got me through when I was laid up.. Farscape on Amazon Prime.

Its the inspiration for Guardians of the Galaxy. Everyone likes GotG. You'll like Farscape. Its almost a 1:1 character archetype. Heck, the lead actor is in the 2nd movie. The first season is a bit episodic until the arc kicks in late in the 1st season. There is a 3 hour movie (which is 'self contained' like Serentiy for Firefly was) that ends the series, conclusion. Then a comic book that Last Jedi'd everything but we don't pay attention to it.

The Expanse is WAAAY better tho as far as 'action' goes. Its fucking amazing.

Runaways isn't as terrible as The Gifted was, or as bad as Dark Phoenix.

Or watch Appleseed and see all those titles below it? Those are cool as fuck too, Vexille, Ghost in the Shell Arise. fuck Traitor of Mars tho.. its crap, Invasion was really good tho.