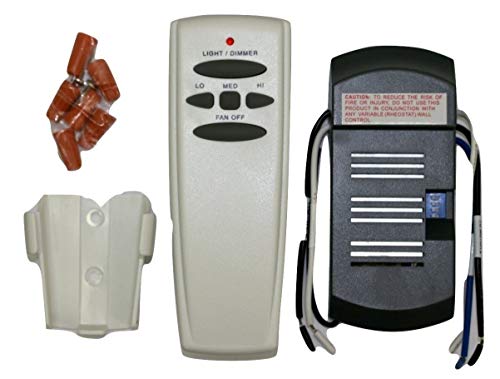 This product was mentioned in 11 comments, with an average of 1.18 upvotes

Really, the best option may be to get a retro-fit fan/light remote control and wire that in. You would need to ensure that the switches remained "on", and then you could control the fan and lights separately with the remote. You could still use the switches, but when they are both off, neither the fan nor light would word with the remote.

Technically you can. But this is also assuming that you have a separate wire for the fan control to your wall switch. This way, you can have a separate ZWave switch to control just your fan.

Alternatively, if you dont have that separate wire for the fan control in your wall switch, I would just get a universal remote control for your fan and call it a day. ([link])

I think the OP's solution helps with fans that are also lights if I'm not mistaken. It looks like a hack to control one of those universal fan remotes using the Arduino and SmartThings.

I'd love to do something similar as I have five fans in the house that I'd like to control separate from the attached lights. I can add these ([link]) but that doesn't get me z-wave.

Another option I considered is a standard AC fan controller [link] and then AC pancake fans but I worry that the tiny little AC fan motors won't be affected much by the set levels of low/med/high.

If the original installer ran two sets of wire from the fan to the switch box, then yes, you can install a separate dimmer for the lights, and a fan speed control (can look exactly like a dimmer) for the fan. But you cannot run a fan through a light dimmer, and if you only have the one set of wires that power both the fan and the lights, then you need to just leave it on a basic switch and use the fan's chains.

Your only alternative is to get a remote control fan kit and install that. The yellow module get's wired in in the box in the ceiling where the fan connects, and then the remote can control the fan lights and speed.

Installing these is intermediate level I would say, as working with heavy ceiling fans can be difficult.

Does your fan utilize a remote control? I installed a ceiling fan on a vaulted ceiling with a remote control module to adjust fan speed instead of putting 10' chain extensions on the fan itself. It worked great, but the module is on its way out because I now have the disco ball effect when I flip the wall switch to turn on the lights. Something you might want to look into.

Redwood: your idea is great for the light. If anyone here also wanted to control the fan speeds as well, this kit is reasonably priced:

You do not want a universal fan control unit?:

IF your current remote has dip switches, this is how you change them:

But there are some single frequency controls out there, and Hunter/Casablanca is one user of those. If so, then your control will have no adjustments available to you. In that case, you'd have to purchase a universal remote and replace the factory one:

what do you suggest?

I was thinking about one of these type fan remotes. Because of their multi-speed feature and light dimming, they do way more than you need done. So maybe one of these type are better suited. Or this. Plenty more of all these type items down the Amazon page.

Instead of getting power from the switch, it might be easier to use power from somewhere up in the attic, or maybe a ceiling light fixture box. If you drop a wire by the fan switch, make sure there is a neutral in that box. White wires aren't always neutrals.