What is reddit's opinion of Fluke 1AC-A1-II VoltAlert Non-Contact Voltage Tester?
From 3.5 billion comments
As an Amazon Associate I earn from qualifying purchases. The following content includes affiliate links for which I may make a small commission at no extra cost to you should you make a purchase. 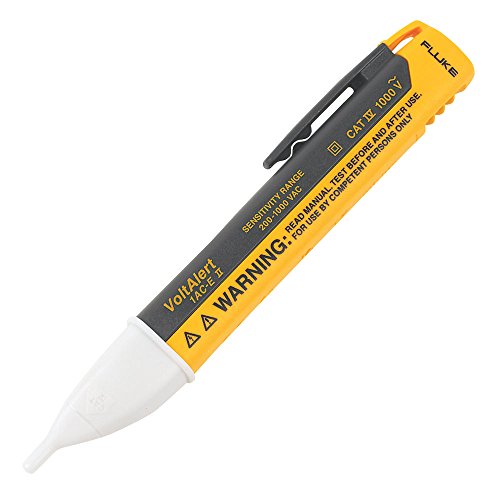 This product was mentioned in 29 comments, with an average of 3.41 upvotes

Not an electrician, but I’ve done stuff like this a handful of times. This all sounds right.

I’d additionally recommend a non-contact voltage tester. Something like this: [link]

Helps to give a little extra assurance that you aren’t about to get shocked.

Looks like a fluke contactless voltage tester to me.

It is not the danger, It detects the danger. Or in more practical cases, beeps while you shut off breakers to figure out which outlet goes to what circuit.

This is why I always recommend testing wiring/equipment when doing electrical work. Even experienced electricians screw up and testing will save your life. Obviously a meter works best but I often recommend a non-contact voltage tester or "tic tracer" like this. Good luck on the next one.

Working with electricity can be a little intimidating/scary but it's really not that bad. If you don't have one, I would buy a non-contact voltage tester. Then:

1) Turn off the breaker to that circuit

2) Unscrew and remove the face plate

3) Use your voltage tester by placing it on the wires on the sides of the receptacle where the screws are. The hot wires should be the black wires, but I always test both sides to be safe (could be wired incorrectly). No beeping from tester and it should be safe to now work with.

4) Unscrew the receptacle from the wall, but don't take off the wires yet. Take a picture of how the wire are connected.

6) If you look at the back of your new GFCI outlet, you should see that it has a set of screws/inserts labels LINE and a set labeled LOAD. You should have the same marking on your old outlet. The LINE wires Supply the incoming power. The LOAD side send the power down to the next device.

8) Most of the newer GFCI outlets work by stripping of the sheathing and just inserting the wires into the back of the outlet and tightening the wires on them.

Tighten everything down and re-install.

You local PBS channel should have current episodes and air older episodes sometimes.

Not sure if you were joking about the ceiling fan, but if the power was properly turned off then you could not get a shock. Never attempt to touch any wires without first testing them, always use some kind of Voltage Tester.

I don't think it's unreasonable for a homeowner to know how to replace a light switch or outlet. I don't do anything that involves adding to or modifying the breaker panel (besides just turning the breakers on and off, of course)

As far as DYI, I'm more inclined to work on electrical then plumbing (depends on what it is, I seem to always get some drips when finished!) and I never work on gas.

Their diagrams don’t really have an example showing this exact use case, which can be a bit confusing.

Basically the easy part is the first three wires:

-Black: tie into 120V line, which should also be black, but it’s not a bad idea to use a non-contact voltage detector to confirm. (You should have one of these anyway to confirm wires aren’t live before you touch them - obviously you cut the power before doing any wiring.)

-white: tie into neutral, which should be white as well

-red: tie into red wires, which are you interconnect (communication between detectors)

The way I have the door sensor set up is that when it sees the circuit completed, it knows the alarm was triggered. This is the default for that door sensor when you configure it to use the relay.

What they’re showing in the manual is similar, but they’re activating a siren by completing the circuit between 120V and the siren.

Once you get everything hooked up, you’ll want to test your detectors and make sure everything is still working correctly.

For electrical tools there is the non contact voltage tester. They're great for troubleshooting but, please, always verify with a digital multimeter before you touch a circuit. A GOOD multimeter, not the $20 auto parts store special.

For a decent DMM go with Extech or Amprobe. The best stuff is Fluke. The Fluke 117 is a good, "cheap" household handyman multimeter. The 87 is the best basic meter, in my professional opinion.

Your electrical testing tools is literally the only thing separating you from deadly electricity. Don't cheap out on them. And, yes, the 120v household power is more than enough to kill you.

I'm trying to replace the switches in my house with smart ones and for that, I'd need to turn the electricity off at the breaker.

How can I reliably test if the switch has power or not?

I got a voltage tester, but I'm not sure if I'm using it right because it gives me inconsistent reports with plug points. How can I use it with a switch (without unscrewing it). Or is there a better tool?

oh my goodness!!! what a great little gadget. I had no idea something like this even exists. I checked Amazon Canada but there are so many of these, and the instruction videos shows them sticking it into the hole of the wall plug. Yeah of course it has electricity inside. Will it work on any surface like a lets say a metal countertop that is "live" for whatever reasons???

I am going to buy the one a little expensive because it seems to be a reliable brand as per the reviews. Please let me know what you think and tell me if it will work on any conducting surfaces??

How about that one please??

I'll second the call from /u/Cheech47 that you should get a multi-meter. I'll go even further and say you should also get a non-contact voltage tester. The one linked is my preference, but just don't pick up whatever cheapy they have at Home Depot or Lowes. You want one that will work in a marginally crowded box without just going off because *something* in there is hot. =)

This is a higher quality one and it's still pretty affordable, these would indeed be pretty helpful. Sure, hidden cameras are inherently hidden but they require some basic stuff (Power, a point of view) and based on that you can surmise where they would be should they exist.

Someone who wants to creep you would want to get you naked so bathrooms and bedrooms, aimed at toilet/shower and bed/closet areas, from there you go for POV, where could a camera be that faces these areas. There are ultra small wifi cameras but most people would go with the easiest possible installation (i.e. wired to existing power sources and so on) so it's not as hard as it sounds.

Take the GFCI outlets back and get a replacement breaker for the pannel. Then there is no longer a question. Also many times if you install more then on GFCI outlet on one curit you will have issues with them tripping each other. If you need to use the outlets and can't replace the breaker, pick up a voltage finder ( [link]) only one black wire should set it off with the breaker on.

This is the one I use and I love it.

get a noncontact current tester and check every outlet before starting after you flip the breakers. Some houses are wired randomly.

Good point. I can try putting a load on.

So the thermostats are single pole: https://www.thespruce.com/wire-a-baseboard-heater-thermostat-1152658

They are inline with the heater, on a single phase. They do not have separate power.

My GC took the thermostats off the wall in a couple rooms and I turned off all the 240v breakers except for my dryer, stove, and grinder pump. I am Trying to find the breakers for the heat in those rooms. Whenever I touch the thermostat wires with a non-contact tester, it lights up: https://www.amazon.com/Fluke-1AC-A1-II-VoltAlert-Non-Contact-Voltage/dp/B000EJ332O/ref=sr_1_5?dchild=1&amp;keywords=non+contact+tester&amp;qid=1630762441&amp;sr=8-5

When I hook a voltmeter up to the hot end of the thermostat wire and ground, it's showing 120v.

So basically I'm trying to figure out is it normal to have 120v on that hot end with the breaker off, which I think must not be right.

I use this guy. It’s pretty bright indicator light and a decently loud tone for voltage.

I also have this guy and it’s a close second. The flashlight is decent. I do like the voltage bar they help identify what voltage you’ve got.

I’ve also tried the fluke flashlight combo and it’s not very good. The flashlight is good but the indicator light and no audible sound can make it confusing.

It's the quickest way to test something yes [link]

Once you get more cash flowing, invest in a actual multimeter so you can test voltage more efficiently. Fluke products are the best.

I’d want to determine which of those wires is hot and which is neutral. Like with a Non-contact voltage sensor.

Yeah, I used one of these. Not sure how accurate they are, but you could be right about it reading another wire.

I used this, an idiot stick apparently lol.

yup, knipex is good. He probably already has a multimeter and hot stick, but I like having multiple hot sticks around as they go bad.

Replacing them is extremely simple. It's just a matter of turning off the power at the electrical panel, unscrewing the plate and switch/outlet, disconnecting the wires from the old switch/outlet, and reconnecting them to the new one. Three way switches just have one extra wire. This video gives a good overview of the process.

The only tool you might want to grab is a non-contact voltage tester to make sure the power is definitely turned off before you start handling the wires. A regular DMM would work as well if you already own one.

Stick it against all sides of a wire, no beep no problem.

You could try one of these

Don't get the klein tick tester or tape measure, they're junk, the tester beeps at everything and the tape will break the first time you bend it.

Get the fluke tester: [link]

And a fatmax tape: [link]

Well, I am an electrician, but I'm in the states.

The color code is a little different than what I'm used to, but I would guess:

I would guess that the two red/white wires are your switch-legs to your ~~two~~ four lights and the single red/white wire is your hot.

It could be that one of the two red/white is your hot, and the other of the two is paralleled off to another circuit. Which would mean that the single red/white off the bottom is paralleling to the ~~two~~ four lights (weird, but I've seen weirder).

You could pull the single off the bottom and check it with a non-contact voltage tester:

Pretty sure mains voltage in the UK is 240V, so be careful. It'll hurt about halfway up your forearm if it "gets" you.

Hey, here's a pretty nice little guide about UK light switches and swapping to a dimmer: How to replace a light switch

If this article is current, your wires are color-coded weird...

I’ve said it before and I’ll say it again. That model of tester is junk. The Fluke 1AC-A1-II is the only one that’s reliable.

Why not just get this?

Seriously, it's a life saver... or you could, you know...check the breaker first... Only stupid people would willingly shock themselves like that.