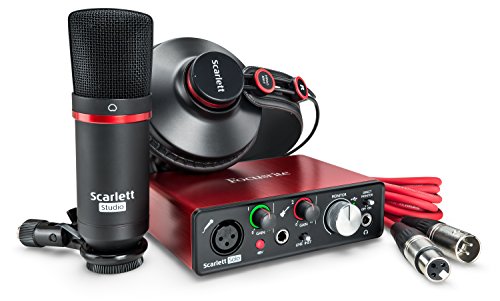 This product was mentioned in 18 comments, with an average of 1.06 upvotes

It was a package item, Focusrite Scarlett Studio Solo. Here's the Amazon link I got it from. [link]

I don't have much of a frame of reference when it comes to comparing microphones. It certainly serves my needs and sounds great. Much better than any other USB mic I've ever used. I had the change available and decided to go for this one with the audio interface.

Plopping down $750 for a beginning foray into VO/ VA work is, in my opinion, not a good expenditure. If you have work lined up that'll cover the costs, that's one thing but if you don't, you're basically buying a vintage Stratocaster before you've even gotten a gig.

I'll let you read the reviews and decide for yourself but I can say that my Scarlett setup sounds amazing. Does it get me work? No. My voice gets me work. But the biggest deciding factor in my getting work is how often i audition for things. I would get a lot more work if I tried out for more things but no one complains about the quality of my recordings.

Oh- i'll just throw this in here. I do my noise removal in Reaper then my edits and filters (compression, in particular) in Audacity. Reaper is absolutely amazing at removing room noise.

what do you think of this bundle? looks really cheap and would be about right for my level. [link]

Thank you Petravita for the feedback. I have a Focusrite Scarlett mic amazon link here that I got from a friend. I was just holding it in my hand because I don't have a pop filter or proper stand. I also live in a 235sq foot apartment so I have to stay quiet which is a huge bummer sense I LOVE YELLING. Thanks for your offer on mixing help, and i'll get back to you about that if I can't get the vocals sounding right on the next song. Thanks again!

[link] Best combo you can get

The Scarlett Solo pack is a great bundle for a novice to learn on. You won't get much professional work with the mic but if you're just starting, I wouldn't worry about that too much as it'll be inexperience and not the mic that holds you back at the beginning. The second input is mainly for instruments so musicians can sing with the mic input and have a guitar/bass line recording at the same time but for what you'll be doing, you likely won't use that input so much. With your budget you'll still need to pick up a mic stand and a pop filter but that's about it. I'd spend the rest on soundproofing a recording space; money is far better spent there at the beginning than on a fancier mic or headphones (although they should be upgraded once you improve).

Software wise you get a budget version of some program or another but for a beginner I'd just suggest you practice with audacity until you learn the basics before moving onto something more fancy if/when you feel you need it. I personally like Adobe audition but I know people who swear by logic; just depends what you click with :)

Best advice I can give a beginner is to get yourself over to voice acting mastery (Crispin Freeman's site) and start listening to his podcasts from number 1. There's a lot of them but that just means there's a lot you can learn from him.

Well the blue yeti plugs in through usb so there is very little setup to do and it has a mute button on the front. If you want a proper setup then you really need a proper microphone (that doesn't connect straight to your pc but to an audio interface, but honestly this is overkill imho), in this case you could just get something like a bundle like [link] which would really step up your game. I would honestly just go for the audio technicas, less trouble with the setup.

Thinking about purchasing this Focusrite Studio bundle (mic, headphones, interface) along with my MIDI keyboard. I am dumb with this stuff so far so I have 2(ish) questions:

1.) What's the difference exactly between the solo studio and 2i2 studio?

2.) Would this microphone work well with Logic? And does it really straight up come with ProTools?

How much learning am I in here for technically being a complete noob at all this?

I forgot I didn't have it on this computer lol

probably going to grab this comes with pro tools

Yeah, everyone is very clear on the whole headset thing. I've been convinced!

What's your take on this suggestion I received - [link]

Looks kinda complicated though. Is it easy for beginners?

I bought this [link] and have been happy with it so far!

[link] hows this? comes with protools

The interface converts analogue mic signals to digital signals for recording on your PC. You can even buy buncles, where you get an interface, a mic, some software like Cubase LE (which is great), and often even maybe cables/stands. I just made a quick google search, and you could go with something like this or this. You can get a USB mic that requires no interface, but I have yet to see one under $100 that sounds better than "decent." I own a BlueBird Snowball, but I can't really find a place for it in studio work. I mostly use it for skyping and stuff.

Also, I would strongly recommend not going with an SM-58 for recording. It's a GREAT micrphone, I own two of them, plus a couple of SM-57s that I do record instruments with. I use them live all the time, but I wouldn't use it in the studio. It won't do your voice justice in that setting. You'll be much better off spending that same amount of dough on a condenser. Avoid dynamic mics (for this).