What is reddit's opinion of Global 8" Chef's Knife?
From 3.5 billion comments
created by @mouseofleaves 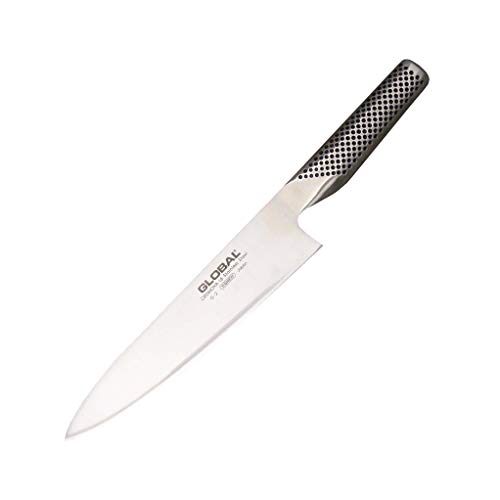 This product was mentioned in 22 comments, with an average of 1.18 upvotes

Love my Global. It's pretty much all I use.

Get it from Amazon and return if you don't like it.

I used this link for mine a couple of years ago: [link]

Interesting. To me, it's his earlier shows - REALLY earlier shows where it was all new to him and he would let the viewers know something tasted like shit. Then, he stopped doing that.

If I'm honest, I did stop paying close attention because after his, "let's eat anuses and eyeballs phase" and then he just seemed to focus on going to shitholes in every country and only say how delicious it was even though it sounded frightful phase. I get that his point was that a lot of good food comes from peasant food. That still doesn't mean I'm going to be cooking chicken's feet anytime soon.

I loved his episodes with the Russian guy who would get him drunker than a skunk and then make him do things, but those were quite a while ago. And evacuating him from Beirut. Probably others, but those I truly loved.

I also liked how he would introduce upcoming chefs as well as sometimes go back to a couple of places because he busted on their cuisine so he gave it another try.

We did get one of the knives he recommended in one of his books. I was too lazy to find it in the books, so I googled it = [link]. I think in his book it was ~$60. Well not anymore - it's double but it is mighty fine. I've only cut myself once with it. lol

global 8" chef if you're willing to spend 100$. on a practical level as good as any much more expensive fancier knife, holds a good edge, etc.

Last knife you will need. [link]

That's a great budget! My favorite chef's knife (not a sushi knife, but it gets the job done & versatile) is the 8" Global Chef's Knife ([link]). Hands down, one of the best knives I've ever used in my life. Rated highly by pros too!

Sadly it's $15 higher than your price range, but I would still suggest the Global G2. It's really just flat out an incredible knife.

The super hardened steel in "professional" knives are much more difficult to keep sharp. They make sense for professionals, because they won't wear away to a nub with heavy use, but unless you're actively using, honing and sharpening your knife for 60 hours per week, they're completely unnecessary.

Here's a perfect starter kit for the home chef:

Don't waste money on expensive sets unless having a butcher block stand on display in your kitchen to impress your guests is something that matters to you. Put your money into a good quality chef knife that's easy to keep sharp and the tools to keep it that way.

If you don't trust me, take it from Anthony Bourdain.

I love my Global knives; I chose them mainly because they are a single piece of stainless steel and I get skeeved out about bacteria hiding (so you could put them in the dishwasher if you wanted to, tho I don’t). They were fairly affordable and have a modern / minimalist style.

Currently I have the 8” chefs knife and bread knife (just amazing). We lost a santoku and a western paring in a cross country move and I will probably replace the paring with the exact same and the santoku with another regular global chefs knife just because I like the look; I don’t think they were substantially better than a competitor of the same style and I didn’t have much use for the santoku.

You really don't need a ton of knives in the kitchen. Certainly don't need a fancy 20 piece set. I have a nice global g2 8" chefs knife. And honestly just fill the rest in with Victorinox. Cheaper but nice quality brand. Get a couple pairing knives, maybe a smaller chef knife, and I can't recommend their offset handle bread knife enough. Serration is sharp enough to not mangle your bread and the offset handle means you don't have to smash your knuckles against the cutting board.

That's really all you need.

Thanks guys. Maybe this is worth a look on my end: [link]

Less than the Tojiro.

Thats the one I use for almost everything.

I recommend the Global knives if you want better value. I've had mine for years and its great. [link]

Get a Global Chef Knife Best knife I've ever used.

IF you can afford it This is probably the best Chef's knife in terms of price to performance. (Very hard steel, keeps an edge for a very long time, and should easily last a lifetime if well cared for). If you want something significantly cheaper, this Victorianox is still quite good, and 1/4 the price.

I think she is referring to global knives. Here is and example.

Thank you very much for your reply. I also found this knife... [link] It's cheap on Amazon Canada compared to Amazon USA. How would this compare to the other 3 choices? I feel like I wouldn't like the handle though, and it seems a lot of people says it's not worth the money. The choices are more limited in Canada as most are a lot more expensive here.

Global makes some amazing knives. Super lightweight, forged Japanese steel that holds an edge. I don't like the way they look, but damn are they great knives. Get the 8 inch chef knife and their paring knife for less than your stated budget.

Go global. I have known many a professional chef that swears by them. [link]