What is Reddit's opinion of Griffin BreakSafe Magnetic USB-C Breakaway Power Cable for MacBooks and Chromebook Pixel?
From 3.5 billion Reddit comments
As an Amazon Associate I earn from qualifying purchases. The following content includes affiliate links for which I may make a small commission at no extra cost to you should you make a purchase. 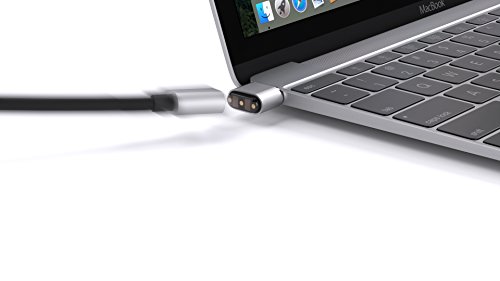 there are a number of 3rd party solutions for magsafe functionality for the new MBP. One example - Amazon griffin BreakSafe <-- see edit

Is it ridiculous that you would need to pay an extra $40 for the new MBP, yes. But that is the standard for being an apple fan. I refuse to have my iphone not in a case with a screen protector or to have my rMBP not in a sleeve when using it at school or traveling. The technology is too expensive not to opt for a quality accessory especially if it is protective like magsafe is.

Like this one only to have a slicker magnetic at the end... + cheaper.. So i can plug it in in the original wallplug.

That said, thanks to the MacBook also losing its magnetic connector, there are adapters that give a magnetic break-off point type thing like this. I don't know how well they work, though.

[link]
This neither uses the apple magsafe charger, nor is it "nearly flush". It's a start, and would certainly save the computer if you trip over the cord, but I don't like it sticking 1cm out the side of the computer like that.

Do you have one of these? If so, how do you like it?
I ask because the reviews on Amazon aren't great. People complain about the magnet being weak and disconnecting all the time:
https://www.amazon.com/dp/B01CQTK6GU/ref=cm_sw_r_cp_api_MZybyb25J9VFE
I wish Apple would develop their own breakaway cable and include them with each laptop that charges via USB-C. That way it would be MagSafe quality.

I found a Griffin brand solution at Amazon on my first try: (no claims from me about its viability)

There's BreakSafe, but it sticks out way too far. I'd like something similar, but way more flush against the side of the MacBook.

There are slimmer ones, but this was the first Amazon link, just to show proof of concept. The slimmer ones can get a little more expensive

Edit: not USB C but the same tech

Wow, so much negativity and whining here. If you're scared of breaking the MacBook, so am I! I'm with you here. But instead of whining, let's see what can be done to FIX SHIT:

First, get Griffin's BreakSafe cable. Yes, it's got design issues but you need something right now.

Alternative is the MagNeo cable that's available for pre-order.

Then, get a decent hardshell. I've got the Fintie, and it's pretty good. 13&quot; and 15&quot; versions are available.

And finally, check your insurance. Creditcard might offer protection, plus your contents insurance may cover it (but make sure and call to see whether it actually covers).

> Part of it sticks out from the body of the computer

> You lose one of your USB-c ports to power

The alternative is a proprietary port w/ MagSafe but lacking any and all accessories that benefit from TB3 and USB-C. I'd much rather have a useful port with compatible accessories than a MagSafe port that lacks third-party support.

There are third party cables that do it.

>I'm not sure anyone needs an iPad now.

Are you kidding? Apple sells three times as many iPads to business as they do to individuals. Clearly there is a need.

It's NOT a phone. It doesn't make/take calls like a phone.

You seem extremely unclear on what a phone is, and what a tablet is, and the difference between them.

>Anyone who needs to do things will go for a Surface nowadays,

They're different devices with entirely different use cases.

>because they're way more capable.

That's a matter of opinion. Personally, I don't need a device that harvests all my information and is riddled with malware.

>USB-C, it is the future. It's not the present though

With that attitude, we'd all still be using RS-232.

>Apple should stop fucking everyone over by trying to force only USB-C.

>Four C's and one A on the new Pro would've went a long way.

Hasn't anyone changed your diaper yet? They didn't get OVER it already. Go buy something else.

>Keeping the SD reader and MagSafe would've been a nice touch.

So would have been keeping the 68000, the PowerPC, OS9 compatibility, Floppies, ADB, and monochrome screens. Then it would have had all the "backwards compatibility" of Windows on a PC.

>Even in the future, professional cameras will have cards on them

Oh yeah? What kind? Lots of 'pro' cameras take CF cards and some take Memory Sticks. Don't hear much whining about those people ALWAYS being left out.

In the near future, professional and consumer cameras alike will come with USB-C, making the need for a card slot COMPLETELY unnecessary.

>which will need to be swapped out to continue recording.

Absolutely NOTHING Apple did makes it difficult to swap memory cards. Any real pro will have DOZENS on hand. You swap the card and keep shooting. You're suggesting that swapping involved offloading the filled card, which is NOT the case.

> In the professional world there's not time to plug in the camera and pull 64GB of data off when it gets full.

Then DON'T. Swap your card and KEEP SHOOTING. You offload once the gig is over.

If you shoot 1200 pictures at a wedding, you're likely an incompetent spastic who doesn't know how to operate their camera.

With 256GB cards being super cheap, the scenario you're creating is complete bullshit.

>USB-C also does not solve the problem of the power cord being ripped out of the machine, something MagSafe did a brilliant job with.

And the the market place provided a solution a full YEAR before this laptop was introduced.

No doubt more will hit the market to cater to all the whiney babies who won't STFU about this.

>USB-C isn't even the present for iPhones.

Neither is USB-A, USB-B, mini-USB or micro-USB. It has ALWAYS required the appropriate cable, and DOZENS of other manufacturers have done the same in the past. Where is the outrage for them?

>You need an adapter to plug a brand new iPhone into a brand new MacBook Pro. That's just dumb.

No, what's dumb is that someone who doesn't own these things, and has NO intention of buying this things, spend EVERY waking moment bitching and moaning about it online.

>They should've gone USB-C on the iPhone if they were going to push it so hard on their laptops.

So the iPhone should have had it first? Then you'd be here bitching, pissing, and moaning about the phones having USB-C, but not the laptops. The fact is, you don't really care about any of this, you just want to shit on Apple. You're a concern troll. Your whole existence is tied up in being upset about things that have ZERO bearing on your life. Doesn't it ever get old?

>But it's not the only thing people have to use yet

Which is why there are products to bridge the gap, just as there ALWAYS have been.

>and it's not going to be a year down the line either.

Bullshit. USB-C is coming, and MUCH sooner than you think.

>They should have put just one USB-A port on there

To keep the trolls at bay? Might have been worth it.

>to at least nod to the professionals and say "yes we realize you still exist and need your computer to do things today."

I hope apple changes the charger to something like this [link]

There are a couple of these solutions already available but they stick out quite a bit. There are better concepts and stuff but I'm always worried about stuff actually getting out of crowdfunding purgatory:

Exactly. I've seen this one: [link]

Sure. Here's just the first hit on magnetic USB-C on amazon today, I'm sure there are others: [link]

The only physical difference in the Magic Mouse 2 is the Lightning connector and the bottom of the mouse to charge the rechargeable battery, meaning you can’t you the mouse while it charges. I personally am not a big fan of the Magic Mouse myself, otherwise, I don’t know any other Bluetooth mice. Check out Logitech mice though, as they make great computer peripherals. Also, if it works with Windows, it will most likely work with your MacBook. Also, for you wireless charging issue, I would recommend looking through Amazon for a magnetic USB type C cable as an alternative, as I have not heard of wireless charging adapters or anything for MacBooks. Good luck!

I’ve been using this one and I love it!