What is Reddit's opinion of H2ofloss Dental Water Flosser for Teeth Cleaning With 12 Multifunctional Tips & 800ml Capacity, Professional Countertop Oral Irrigator Quiet Design(HF-9 whisper)?
From 3.5 billion comments
As an Amazon Associate I earn from qualifying purchases. The following content includes affiliate links for which I may make a small commission at no extra cost to you should you make a purchase. 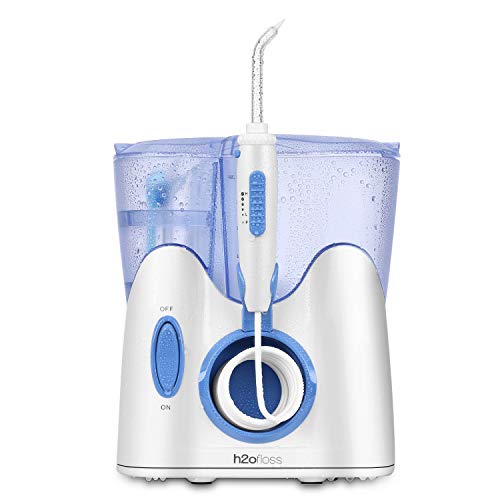 This one. Just got it. The old one broke. So far very happy with it.

I bought a water flosser on Amazon and it has helped with my chronic bad breath immensely. Just start on the lowest setting at first until your gums get used to it and make sure to use lukewarm or slightly warmer water otherwise it might be too much for sensitive teeth and gums. It turned out I had an impacted wisdom tooth/molar that was hiding food particles that could only be flushed out with water until I could get them surgically removed.

This is the one I currently use. [link]

I have both a portable and a big one that plugs into the wall socket. The big one has three big advantages: it's more powerful, you don't need to worry about the battery running out on you while you are using it, and the water tank is bigger. I know this because my first irrigator was a portable one and, sure, it was great when travelling, but the battery was always a problem. As the battery wears (they always do), it will become less and less powerful, and you will have to charge it more often. Every time I used mine I was afraid it wouldn't have enough juice to do all my teeth. The other problem is the water tank on portable ones is tiny. I normally use 800-1000 ml each time. With the portable one I had to refill the tank a couple of times half-way through which is annoying. Because I was always worrying about the water or the battery running out, I always ended up rushing through my cleaning and probably not doing as good a job as I should have. The only con of the mains-powered model is that it's bigger—that's it. Noise level was about the same for both, but this may vary depending on brand.

If you intend to share your irrigator with other family members e.g. your SO, then battery life is a huge problem and in that case I recommend the mains-powered model 100%.

If you travel regularly, you'll end up wanting to have one portable and one mains-powered. I keep the portable in my suitcase and the big one in the bathroom.

About which brand, I got an H2Ofloss HF-7 Classic. I think it's a Chinese knock-off of an older WaterPik model. I got mine when I was in China a few years ago for the equivalent of 20 USD. I can't find it on Amazon now but I can find their slightly higher-end model on Amazon, the H2Ofloss HF-9 Whisper, for 36 USD. I assume the underlying technology is the same, but the outer appearance is slightly different. They also have two portable ones, the HF-3 (the one I have) and the HF-5. The HF-5 replaced the HF-3 and it's sh*t, I actually bought one but returned it immediately because I was not happy about the new design (flimsier materials, no screws so it was impossible to open for cleaning, and a couple other problems).

Just read reviews on Amazon before you buy.