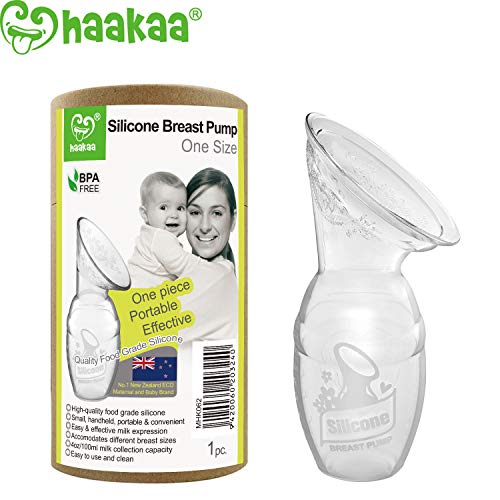 This product was mentioned in 14 comments, with an average of 1.29 upvotes

I have been using a silicone breast pump on the opposite boob while I nurse and get 1-2 oz a feed with it. Over the course of 1-2 days I get enough for a 6oz freezer bag. Might be worth a try and it’s not that much extra work. [link]

I went with this one. A lot of moms in my Facebook mom group raved about it and it's through Amazon Prime, so easy to return if things don't work out :D

One thing that helped me build a stash in the early days before I returned to work is a silicone breast pump that catches your letdown on the side the baby is not nursing from. I would catch a couple of ounces per feed that would have just been wasted in my nursing pad. They are really reasonably priced to on Amazon.

You might be able to find it in your region by searching the internet. I didn’t even know there was a drink mix until I stumbled on it in the store by accident! What a game changer. I had no idea! Also the haaka helped too. Best wishes OP! Sending you all our best for happy healthy baby! [link]

Hi! I was an exclusive pumper too and supplemented with formula for night feedings! I struggled with supply until I purchased two of these and it really changed the game for me.

They pull milk from your breast and they are hands free! Super cheap too! They increased my supply significantly over a few weeks. I always would hand express a little to get it going but I would almost always make 4 ounces per session when I was initially only making about 2. You can walk around with them and do other things, but just make sure they are suctioned on good because I have had my fair share of milk spills.

Just thought of one other thing... have you heard of the Haakaa?

If you used that just before your feed it might help with the heavy let down and then the flow wouldn’t be as strong. It doesn’t pump it just suctions on and collects what comes out so you don’t have to waste.

So sorry to hear this is difficult for you. I hope you can find a solution!

Not exactly a traditional manual pump, but I love the Haakaa pump. Might be what you’re already referring to though.

It’s a small suction hand pump. Great for catching letdown on your opposite side, or in the shower/bath when you randomly let down. If I use it twice a day, I extract enough for a bottle feeding. Super easy and has no parts, so cleaning is a breeze!

I'd pump however much he's eating. I.e. if you're giving him 2 bottles, pump 2 times. Don't ignore the pain and engorgement--try sunflower lecithin, and a Haakaa on the side you're not pumping on. Lots of breast massage and heat helps.

Forgot to add that you can also try using a haakaa when you nurse. You just suction it onto the breast that your LO isn't nursing on and it collects milk from your let down. Some people can get an extra ounce or two each feed that way. [link]

They're on Groupon often, believe it or not! Also I heard a lot about this single suction manual pump after it was too late to use with my son. I definitely plan to check it out with the next baby. And finally, it's nice to have a single manual pump too (not electric) - good for car rides, when you need to pump only one side a little, etc. Oh and one more thing - hands-free pumping bra. I liked the simple wishes one.

I got one of these and am super excited to use it. Like OP, I'm also 5 days PP and am starting to have some serious spray issues. Going to try this guy out tonight and see how it goes!

If you plan on putting your baby in daycare, you definitely need a double electric. As another mentioned, check your insurance!! But if not, I'd still urge you to buy one like the Spectra s2 which is $159 on Amazon right now. Even though it's a large upfront cost....don't forget that formula will cost you so much more in the long run. So you'd be making an initial large investment to then save way more later. Keep in mind that formula can cost anywhere from $70-$150 a month....depending on what you buy.

Don't listen to your bf. You have plenty of milk! Supplementing with formula is only necessary if you weren't making enough or you don't want to breastfeed.

I agree with getting a haakaa to catch the drips. Make sure to buy from haakaa USA. There are fakes that aren't guaranteed that pass themselves off as haakaa.

One of the knockoffs which was actually a good and trustworthy one was the naturebond but I believe it's been moved likely for copyright.

For a haakaa, you use it either to catch drips after a feed and you're still feeling engorged or during a feed on the non nursing side.

But want to add that it is not a replacement for a double electric. Use a double electric for when your kid is in daycare and gets a bottle. The safe rule of thumb to maintain milk supply is nurse/pump as often as baby eats. For most babies....that's probably 8-12 times in a 24 hr period. you've got a big one so I'd expect your number closer to 10.

To build a stash, you can pump directly after you feed or do 1 additional pump in the morning about an hour after his morning nurse.

Does your bf explain at all why he suddenly wants to formula feed? I bet it's bc it bothers him to see something he sexualizes leaking...but boobs were made to feed babies first before they were ever meant to amuse men....just saying.

I got the Medela pump through my insurance and it works (it is pretty loud) but it is nice being able to get parts if needed at almost any store! I wanted the Spectra but my insurance didn't provide that option.

Many people use a haakaa on the side they are not feeding on to catch the letdown! I prefer the milkies milk saver since it goes right in your bra/tank top and you don't have to worry about baby kicking it off!