What is reddit's opinion of Hario Skerton Upgrade Kit?
From 3.5 billion comments
Created by @mouseofleaves.
As an Amazon Associate I earn from qualifying purchases. 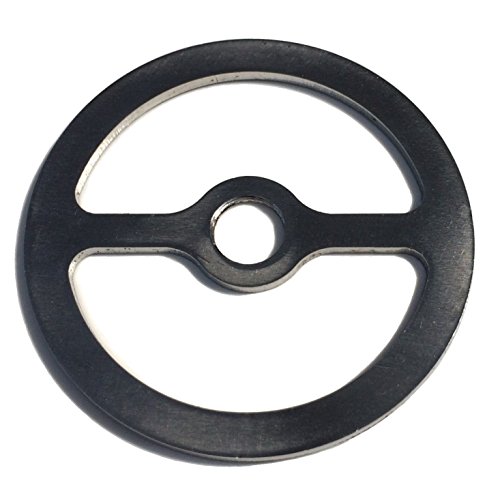 This product was mentioned in 27 comments, with an average of 1.30 upvotes

There's a stabilization mod you can buy or the tape mod, but essentially, you get what you pay for with grinders.

Check it the Timemore C2 or some of The 1zpresso grinders for better budget hand grinders.

I didn't look closely, but it looks like you have a Hario skerton. This is an upgrade kit that products a much more consistent grind.

If you're only using it for cold brew you won't notice much difference, as grind consistency is really only important for short be times (French press) or water flow consistency (batch brew, pour over, espresso).

If you want to test before you make the investment, you could brew a batch of cold brew with your grinder, and take a jar of water to the local coffee shop and have them grind the amount needed for that jar with their commercial grinder, and you could put the ground in immediately for a solid side by side comparison.

I just got a Skerton Plus and ran into the same issue (and subsequently went searching reddit about it). The burr wobbled a good bit, ground against itself, and my grinds were very inconsistent, with big chunks and fine dust every time.

My solution was to wrap a bit of duct tape around the shaft where it meets the stabilizing plate (i think that's what the little metal bracket near the bottom is called). The shaft fits much more snugly now and wobbles a lot less. It does about the same thing I suspect this "upgrade kit" does: [link] Of course, not super sure how food-safe duct tape is.

That bit of tape improved grind consistency quite a bit, as well as my pourovers. If you're still using your Skerton Pro, it may be worth giving a shot.

Huh, interesting read. I always forget that the Skerton comes without the stabilizing ring, with that it is several steps up, without it, yes it is horrible at anything remotely coarse. [link]

Idk if this has been mentioned to you yet or not, but I recommend picking this up for the Skerton. It's a stability modifier meant to give a more consistent grind. Also, following the method of adjustment from the previously linked-to Tumblr, I typically use a 5 or 6 for V60 and a 7 for Chemex. So I would say 7-8 for the drip. Hope this helps!

Very informative, thanks. Is there a better manual grinder than that Skerton that isn't as expensive as a good automatic, or is that going to be as good as I'd need?

Edit: I just noticed an upgrade kit for it, would I want that too?

Yup, you can add a bearing kit to the Hario which is supposed to help keep course grinds more consistent. The trade off is that once installed you lose the ability to adjust down to a super fine grind. That said, it can be removed if at some point in the future you find yourself needing to grind for espresso but tbh it's a bit of a chore to install/uninstall. For a Chemex, I'd say go for it!

If you watch the campaign video for the even grind there is a point where the guy connects a lower stabilizer and they go on to say that it is that part which makes the even grind better than a skerton. Basically, the 3D mod prevents the inner burr from wobbling inside the outer burr. As the distance between the burrs increase the amount of wobble does too. So at larger distances (i.e. coarse grinds) the difference allows large pieces (boulders) to drop through. The example you have linked there will work fine. If you want another option there is a metal one on amazon ([link]) that some people claim is more foodsafe.

FWIW it would probably be better for you to get a used Encore on craigslist for $70-80 rather than try and mess around with mods.

Yep. Did you get the little insert that supposedly makes for a more consistent grind? Many recommended it here on /r/coffee especially for use with a French Press.

It's such a simple piece. I wonder if there is a cheaper way to achieve the same results.

Do you have the skeleton upgrade kit? It's about $11 dollars on amazon and it help the consistency a lot!

How about with the upgrade kit for $13 ?

I thought of experimenting with this too. Crushing the beans by "hand feel" is quite satisfying! There is also a mod kit for this grinder that looks good for stabilizing the burr.

This is like the one I got. Super simple to install. You may be able to find it cheaper then what I linked, that was just the easiest to google.

For example but not limited to this

You can fix some of the Hario's inconsitencies with a simple mod.

I use a Skerton with the stability mod and I find it works great for V60.

Thanks for the reply. Which mod are you talking about? This one? [link]

Here's the OE one. There's a link to an installation video on that page too. Basically I had to grind down a socket to fit in the burr and getting the burrs aligned takes a while.

Amazon has an upgrade kit that looks like it might be the same, but I don't know anything about it.

EDIT: I eventually bought a lido 3. If I was going to do it all over I'd just buy the lido to start. If you don't have/don't want to spend the money and are mechanically inclined, skerton + upgrade kit is pretty good bang for your buck.

I've been using one for about a year and have had decent success with it. Like everyone else is saying, it's not terribly consistent at coarser grinds, but it works well-enough for my Aeropress at work. I've gone a bit coarser on a couple of occasions for making cold-brew at work, and yes, it does end up with a good amount fines, but it didn't affect the resulting brew enough for me to notice (but I'm no super-taster).

There are a couple of low-tech mods that you can use to increase the consistency of the grind. Here's the link. It uses regular Scotch/Sello-tape to cut down on the wobble of the burr. Took me a couple of tries to get it right, but I think it does help. Even so, I'm guessing it doesn't compare to a grinder with a stabilized burr (e.g, the Skerton mod ($), the Kuissential Evengrind ($), the Handground ($$), or any of the Lidos ($$$)).

I have to fight the urge to keep myself from continually wandering over to the look at the Lidos, but someday, I might succumb to the urge.

It's now available on Amazon

U.S. Amazon has a Hario Skerton upgrade kit too, for replacing the plastic bearing, which wears out after a while. I haven't gotten around to trying it yet.

Here's a picture of the final product.

Here's post about it. I was surprised at the number of fines. But it's an improvement.

That was made from a can lid. If you want to buy one, here's one.