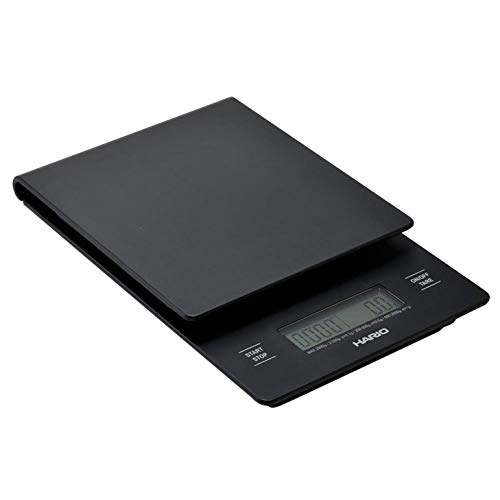 This product was mentioned in 29 comments, with an average of 0.86 upvotes

Very curious what you've heard. They're flawless. I check them periodically with coins, they're precise to the 0.1 after a few years.

But by all means you should buy what you want. I was just throwing it out there for ideas.

I would highly recommend the Hario Scale with built in timer. I have drenched mine with coffee several times and it's still going strong. I have had a couple Jennings go bad on me and they often freeze while pouring. The American Weigh Scales AMW-SC-2KG is another great option.

Hario Skerton (25) + Aeropress (30) is a great place to start if you don't want to spend money. Spend the rest on good beans.

If you want to spend more grab a cheap scale or a Hario with a built in timer. Replace the Skerton with a Capresso Infinity grinder (70-80). Neither of these are perfect, the scale is laggy and the retention on the Infinity is pretty terrible, but they're both a great place to start when you're on a budget; especially when combined with an Aeropress which is one of the more forgiving/versatile brewing methods. Right now my Lido E is out of commission, I'm back to an Infinity+Aeropress for the time being and there are worse things in the world.

If you want to do pourover, you'll have to invest in a gooseneck and definitely need a scale. A v60 is pretty cheap, but it also takes quite a bit of time/practice to consistently produce good results, so this might be something you look into down the road if you're still interested. A good grinder is also going to be much more important with pourover than with an Aeropress so you'll need something like scale+gooseneck+Infinity+v60 to get started here, which is going to bring costs up.

Whatever you end up doing, enjoy.

I have this scale. It's extremely accurate and works great for coffee, I'm sure it would work great for weighing cigar packages too! I think it only goes up to 2,000 grams though, so about 4 lbs.

Hey Quick Question, I'm just now getting into pour over coffee and I am about to buy a scale, I do like the idea of it having brewing features on it to help a novice like myself

Is this scale worth the money, or should I go with another option.

We have a few Hario scales that we use to make aeropresses and chemexes in our cafe. Since those orders are few and far between, i just keep it under the machine and use it to weigh and time my shots a few times per shift. It's no hassle at all since it's both a scale and a timer in one. Maybe consider buying something similar?

I have a set of scales similar to the ones u/pricezombie linked below and use these to weigh out the beans from their container and putting those into the grinder. Admittedly these will not weigh your portafilter.

I also have a Hario scale that I use with my Chemex and will happily weigh your portafilter. This scale does seem to have a little "lag" at times but both those scales are perfectly accurate and pretty durable.

I haven't used the Hario Mini Mill before, but I've heard good things regarding it's use in this price range. Just keep in mind that this set up will only make one cup at a time. Also, I would get a decent scale like this one to measure your beans and water so you can control some of the variables that affect taste.

Nice gram scales are cheap (<$20) and easy to find. Scales with an integrated timer (Hario) are not cheap and have no competition to speak of. I tried to find alternative 0.1g resolution scales which showed the weight and timer simultaneously, and came up with nothing, so I bought the Hario and it works great for pourovers. Before getting into pourovers, I used a $10 digital kitchen scale with 0.1g and 1/8oz resolution.

Not sure what your budget is like, but I've seen a lot of Breville Infusers around the $350 mark (amazon warehouse deals, "open box", etc.) and it's an incredible machine at that price.

I think a lot of people are really allured by the idea of a more "proper" espresso machine with a boiler (like the gaggia) but they can take a long time to properly heat up (gaggia claims 5 minutes, but many people will tell you you need 10-20 for temperature stability), and you have to mod it if you want any features like pre-infusion or temperature control.

The infuser already has a rudimentary PID built-in, and you can program the shot buttons, pull manually with as long of a pre-infusion as you want, and adjust the temperature +-4 degrees from the starting point. It takes about 45 seconds to pre-heat from the time you turn it on, and when paired with a grinder that has a portafilter holder, it takes me about 2 minutes total to make an iced latte in the morning. Furthermore, I love that it has a pressure gauge on it- I think that has been instrumental in helping me get better at dialing in shots (but not as instrumental as a scale. 100% buy a scale if you get an espresso machine. I'm quite fond of the Hario coffee scale that has a timer built-in) but anything that can measure tenths of a gram will do).

Overall I'm super happy with mine for the money, the only downsides I've found are that the breville uses a 53mm portafilter, where the industry standard is a wider 58mm, meaning there are fewer accessories (think tampers and whatnot) available than if you have a standard sized basket, and that since it's a thermoblock machine (as opposed to a boiler) the steam pressure isn't quite as high. You can still make great milk with it, but it takes probably 3x as long to froth as a machine with a powerful boiler, so if you make a lot of hot drinks, that may be something to consider. But devil's advocate, with a single boiler machine you don't have much control over the temperature, and it's tough to go back and forth between pulling shots and steaming (that's why most commercial machines have a dual boiler, one for steam, one for brewing) where a thermoblock machine like the breville heats up and cools down very quickly, which can make it a little easier to go back and forth between steaming and pulling shots.

Btw, good coffee scales will go down to 0.1 gram accuracy.

It's in the Black Friday sale on Amazon in the UK right now if anyone is interested.

Yea, the scale has a built-in timer. It's this one:

note: i used a mix of sources. the scale and kettle come from amazon but everything else was overpriced there. hell, those items are probably overpriced there too. the chemex is listed in google express and the filters are from william-sonoma. you can usually find good deals from these places on coffee equipment being liquidated. you could potentially even pick up everything you'd need directly from a specialty cafe that has equipment for sale in your area. if you're interested in continuing your coffee brewing, you'd definitely use the kettle and scale for any other drip methods, like v60 or kalita wave.

cheers and i hope you and your family have a great thanksgiving.

i like this one. it is pretty popular with the coffee enthusiasts too. that is what i originally got mine for.

this is my recommendation.

I am using a Hario Scale. It's in grams and it has a built-in timer.

Hey, could you cut down those Amazon links? The spam filter doesn't like them.

For example, the first one could be simplified to:

I have this one. I think that is the standard entry level scale that has both. I brew in a pretty small nel pot so you might want to check the size in comparison to your Chemex. Anyway, I feel like the scale/timer combo really improved my coffee and that one works for my needs.

Not so low key

A scale would be a nice addition.

A pour over will give you a much cleaner cup than a French press for very little extra work.

When you use a pour over, getting your ratios right becomes more important and this will lead you to both a scale and a pouring kettle. Shop around for prices but something like this and this. Pour overs themselves are pretty varied ranging from one cup cones to, my favourite, a larger Chemex

You are going to get much better coffee with a pourover than with a regular drip coffee maker UNLESS you are ready to spend more money in which case look for ones with the SCAA recommendation.

Go for a hario scale. You may be able to sit this under the portafilter
Hario Coffee Drip Scale/Timer [link]

Run your finger around the inside of the strainer end cap after you put the paper filter in to ensure it seats properly at the edges and is completely flat... ensure your paper has not been previously made wet.... nice and flat paper, twist cap tight and you shouldn't have a problem.

Look around here for recipes that are amazing. [link]

This is what I do and it's from a runner up at one of the championship. :200grams water, 15grams finely(espresso) ground, 200 degree water, slowly pour and stir, brew for 60 seconds, slowly plunge for 30, leave 10+ of coffee in the plunger and through it out. Vacuum seal whole beans, grind then brew immediately. Water quality is MOST important (huge impact on flavour). My measurements are always off a little. I use a Hario weight scale to get these numbers:

It doesn't do liquid oz if that's what you're asking, a scale can't measure volume. I do all my brewing using grams.

A Chemex is a pour over brewing device, if you ever want to try something different if highly recommend it: [link]

Cheaper ones just fail for no reason and aren't responsive (like you have to pour in 10g before it registers). This one is trooper, responsive, doesn't mind getting a bit wet. And it plugs in (it's a sad day when you have no batteries with most scales). AND it does .5g sensitivity, which in general is all you need (unless you're doing espresso).

Sure, the acaia is even better... but the Jennings is well-recommended here. (As is the hario )

Pretty sure it's this scale, I have the same one.