What is reddit's opinion of Harry Potter Wizard's Collection (Blu-ray / DVD Combo)?
From 3.5 billion comments
As an Amazon Associate I earn from qualifying purchases. The following content includes affiliate links for which I may make a small commission at no extra cost to you should you make a purchase. 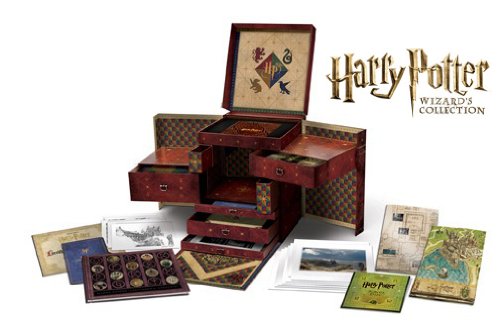 This product was mentioned in 10 comments, with an average of 0.90 upvotes

Phew that's good to hear, Harry Potter is forever. I have a set of first edition American ones because I grew up buying them at midnight releases lol. I also have fantastic beasts, quidditch through the ages, the printed manuscript of the cursed child, the unofficial cookbook, and the Kay illustrated version of the Prisoner of Azkaban, and some of Rowling's other works like the casual vacancy 😅 and this beautiful thing that I bought when it was only $300 and now it sells for an insane price

I've been to Harry Potter World twice and have some dope memorabilia too like a light up goblet of fire and a working marauder's map. I collect the pops as best as I can, there's like over a hundred though and my pockets aren't that deep 😭😂 I'm gonna set up a whole Harry Potter/ magic/ plant nook in my new place when I get my shit together lmao

It’s a 31 disc collection of all the movies and some extended scenes/bonus features and some swag! Here’s the full amazon description [link] It is a pretty rad thing, even the packaging is nice!

Is this similar in content to what you bought?

This one that is currently sitting at $1000 haha

The Creating the World of Harry Potter documentary was orginally exclusive to the Ultimate Editions, but it soon spread to other editions released after it (including the Wizard's Collection, Hogwart's Collection and most recently 8-Film Steelbook Collection.

Additionally the recently released Special Editions, which is what you've found, include the documentary as well. So the edition you stumbled upon while legit, won't contain any of the other physical extras that the Ultimate Editions have.

...which contains a mix of extended cuts with theatrical cuts. Gotta wait for the REAL box set.

Look at those terrible reviews!