What is reddit's opinion of HEROINE MAKE Long and Curl Mascara Super WP 01 Jet Black?
From 3.5 billion comments
As an Amazon Associate I earn from qualifying purchases. The following content includes affiliate links for which I may make a small commission at no extra cost to you should you make a purchase. 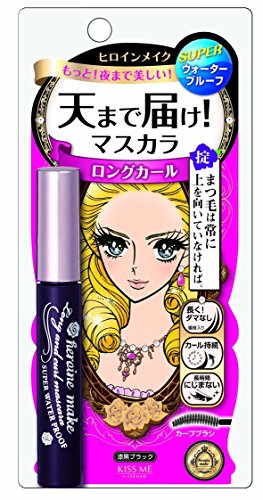 This product was mentioned in 33 comments, with an average of 6.58 upvotes

I use Isehan Kiss Me Heroine Make waterproof long and curl mascara and I'm OBSESSED. I avoided this mascara forever, but now it's my holy grail.

I struggle with my mascara rubbing off on my lower lids all the time, but this mascara holds a curl all day and never flakes off. It makes my eyelashes look SO LONG, and I'm Asian, with normal, straight lashes.

If waterproof does the same thing on you, you might like tubing mascara! People love Heroine Make mascara (I think it's this one?). You have plenty of time to order it and try it out!

I kept hearing about Kiss Me Heroine mascara and how well it holds a curl... let me just say, I’m blown away.

I have pin straight lashes and use a heated lash curler every day. Typically by the time I’m done my lashes are droopy and barley lifted. Not anymore! I tried it last night and they kept their curl in hot humid weather until I washed my face.

Now my new worry is making sure both eyes are curled the same, since I know they won’t budge!

Super straight Asian lashes here too. Waterproof mascara changed my life. My favorite is Isehan Kiss Me Heroine Make Long and Curl (Japanese brand you can get on Amazon: [link]), but I've also had decent results with L'Oreal ones. It also helps to find a curler that really fits your eye shape and gets all your lashes.

This isn't quite what you've asked for, but I've always heard great things about the Isehan Kiss Me Heroine Make waterproof formula in terms of holding a curl on very straight lashes. If you're located in the US I don't think you'll be able to walk into a drugstore and pick it up, but if you're willing to order online the price point is comparable to drugstore.

*edit: I should mention that amazon has a well-documented problem with selling cosmetic fakes and since I've never used this mascara I don't know what the listing is supposed to look like. The link I provided does appear to be from Heroine Make and has lots of good reviews but do your own research before purchasing.

So. I curl my lashes, use this mascara, curl again. This shit is HARD to get off, but it holds and if they fall after swimming? Curl again and yeah. I used to do what HC423 said: I'd curl, use a mascara, curl then seal with a waterproof mascara. The mascara I linked works fantastic but seriously. ITS HARD TO GET OFF. Coconut oil, a spoolie and another cleanser >.>

I love this mascara. I have asian eyelashes and it keeps them perfectly curled all day, one thing to note is that you will need an oil based makeup remover to get it off.

Got from Amazon Here:

I have short, straight, and stubby Asian lashes. Used 3 coats, let them dry in between.

I’m used to having lash extensions so trying to remember what realistic expectations of mascara are!

I am fine with the length and it kept great volume, but it did not give me much curl. I haven’t used an eyelash curler since getting extensions so that might do the trick next time I apply!

Peep the comparison pic and judge for yourself ✌🏽😉

AND IGNORE my ridiculous quarantine brows. 😭😭😭

How do you wash off your mascara?

It's like a neverending bleeding of ink trying to take it off. I usually close my eyes and massage it all and then it transfers to my lower lid then I wipe.. but then there is always more left in my lashes and it takes at least 2 washings to get it all.. Does anyone have any tips? Right now I am using a makeupforever smokey extravagant sample from last year. I am thinking of buying this one but I am worried that I might end up with residue that I can't get off or it just won't come off even with oil cleanser... (I use the illi total aging oil cleanser)

Ok, I'm Asian with oily lids and cry like a baby, and this mascara is my holy grail. It WILL NOT COME OFF (in fact, if you have this I hope you have a good eye makeup remover, cause it's a bitch to get off). It's amazing. [link]

Was the Heroine Long and Curl mascara (pink tube) replaced with a new formula or packaging? Is this the replacement? If so, how does it compare to the pink tube?

I bought KissMe Heroine Long &amp; Curl Waterproof Mascara. It's very waterproof and does add volume but not much lengthening, perhaps something to try? I bought mine from ebay though, not amazon.

[link] This stuff will not budge.

Echoing the Heroine suggestion. It's indelible for me, and I have extraordinarily reactive and sensitive skin.

I use the Heroine L&C waterproof, and what works for me is: Curl, mascara, comb. No clumps, and lasts for days unless I use the remover.

I've also tried hundreds of mascaras, and the best I've found for holding a curl is kiss me heroine make long and curl super waterproof mascara

I use the technique in this video to curl my lashes... except I don't usually use primer.

This is the link I use to purchase. [link]

Summary of this horribly long reply:

Once you make peace with not having it easy to wash off, the mascara options widen a bit. However there are many ways to ease off mascara, such as coconut oil or other oil based cleansers (but some people don't want to put oil on their face, understandably).

Personally, I use Garnier Micellar Water (the one that says it can take off waterproof mascara), and it definitely does work well and fairly easily. It is oil/alcohol/fragrance free, so it shouldn't aggravate sensitive skin.

Bear with me here: My technique in using it is to soak a bit on a paper towel and bring it to the side of the lashes that get coated with mascara. Instead of just holding it there for a while, I move it as if I am trying to coat the lashes with mascara again, except I'm holding the soaked paper towel, careful not to let it touch my eyes. I do that until they are clean, which does not take long. I see many people removing mascara by holding wipes or whatever directly over the eye without distinguishing which side of the lashes get covered in remover. I hope this makes sense, I haven't really seen many videos on mascara removal, maybe I'm not the only one, but I just kind of did it one day and realized I had been taking off my waterproof mascara the harder way. I also rip out way fewer eyelashes this way!

At the moment I am almost done with a tube of Heroine Make Long and Curl waterproof mascara, and it is Japanese and super-waterproof; most people say it is a beast to remove, but I find it easy with the micellar water. It holds the curl beautifully and survives through crying and rain, and I even took a shower with it on, and there were no smudges, and the curl was still breathing, miraculously. It has fibers that actually do lengthen your lashes, but you may want to add another mascara for volume or purposefully clump lashes together with the brush then only separate a little. I will repurchase, though the shipping takes a few weeks from Amazon.

I also have Better Than Sex waterproof, but that one has many mixed reviews and may not work for you. Also clumpy, but I find that adds drama to my lashes, so I keep it.

Other than that, I don't notice how hard mascaras are to remove anymore, and I've used plenty of drugstore ones, like Loreal Telescopic, many Maybelline ones, and CG Lashblast (all waterproof versions)

Something that helped me was realizing that since my eyes are oily, "water"proof mascara does nothing for me. With my eye shape and living in a super humid environment, I stopped wearing bottom lash mascara for a while (!!!) until I fell in love with Heroine Make mascara. It's an Asian brand that DOES. NOT. BUDGE. The only downside for me, is that it is so permanent that if I accidentally touch my contact, it will never come off of it. So proceed with caution! Here is a link to it on Amazon if you're interested in trying it!

For techniques, since switching to that brand I haven't had to use these, but maybe it could be helpful: Carli Bybel actually just made a video with a technique for this!

Echoing the Heroine suggestion. It's indelible for me, and I have extraordinarily reactive and sensitive skin.

I use the Heroine L&C waterproof, and what works for me is: Curl, mascara, comb. No clumps, and lasts for days unless I use the remover.

It never mattered what I used it would always smudge. Every single one, regardless of bdand or price point. Until I found this one! I will never use anything else. You'll want to get the remover as well, it is very hard to take off without it.

This one focuses on volume, while the first link is for length. They honestly work the same to me, I think one just has a curved wand and the other has a straight wand.

I have pin straight, thick Asian lashes for reference!

The brand is “Heroine Make,” and you can purchase them on amazon! Link: [link]

I really like Japanese drugstore mascara. They don't flake at all for me, add length and volume for me and don't bother my contacts at all. I wear contacts pretty much every single day too. They are also usually waterproof! It's a fiber mascara though.

I use a gel pencil to tightline, liquid pen for eyeliner and the mascara with no issues too.

I've tried so many that flake, Maybelline ones, UD, bobbi brown, YSL, they all have flaked and smudged.

Another one that I found that was pretty decent at a low price point is actually Sephora's Lashcraft. I was surprised at how well it worked! It didn't flake until maybe like 12 hours and held up really well on my lower lashes.

Apparently the Kiss Me Heroine mascara is a miracle for keeping straight lashes curled all day, maybe check it out :)

I swear by this, it will NOT move.

I bought mine off amazon... this one

I usually get mine shipped from Japan through a relative. :) Not really sure what you're talking about but I saw this on Amazon

I have the Heroine Make Long and Curl Mascara and it works so well for my stubbornly straight lashes and oily eyelids!

Heroine Make Mascara is super popular, it's made for short Asian lashes. I think Ulta sells it for more.

I prefer the Isehan Kiss Me heroine mascara

I've reordered it several times and it out performs even the high end luxury brands.

Just to let you know, I buy mine from Amazon for 12! link

This stuff? I'm in the market for new mascara.

The brand referenced by /u/juriana is Isehan, and can be found on Amazon. Here is one of their very affordable and well-reviewed mascaras.