What is reddit's opinion of Home Brew Ohio One gallon Wide Mouth Jar with Drilled Lid & Twin Bubble Airlock-Set of 2?
From 3.5 billion comments
Created by @mouseofleaves.
As an Amazon Associate I earn from qualifying purchases. 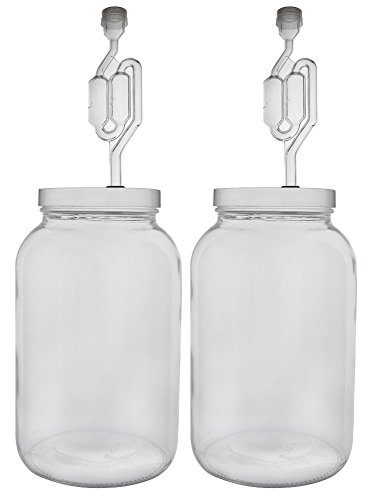 This product was mentioned in 26 comments, with an average of 1.08 upvotes

I did a pretty basic ferment, and my first one. I took a gallon jar, put in two whole garlic cloves, filled it with halved Roma tomatoes from my garden, then topped off with a 2% salt water brine (spring water and pickling salt. No chlorine or iodine), put a glass pickling weight on top to hold everything under the brine, screwed on the airlock lid from Amazon, and let them sit for about 10 days.

Amazon had them. I like to go the LHBS for most things, but these were to sweet to pass up.

I only used it for a year or so making kombuchaor pickles and I was trying out zucchini kimchi and as I'm unscrewing the lid it gets stuck and breaks. I threw the whole thing out because I was afraid I missed some glass...

Primary- 1 gallon of Resistance IPA, because the last batch got infected. Worried it'll be too bitter. I don't make a lot of hoppy beers, but my homebrew club wanted to all make the same beer and score each other on it.

Also a 1 gallon batch of oatmeal stout that was cold mashed. Ended up getting 50% efficiency after all the oats but it'll make an amazing breakfast stout. Don't really know how much coffee to add for that but I'll figure it out.

Bottled - Irish Red Ale I made for coworkers. It's going to take a while to give out, but it's been well received so far.

In planning - bought a vacuum chamber a while ago to make NA beer, and originally I was going to use it on the oatmeal stout. But now I'm hyped for oatmeal stout so I'll have to figure it out. Wish I had made more than a gallon haha.

Active projects - I talk about beer pretty regularly, and here in New England we have a pretty big craft beer scene, so in the past few months I've met a few people who want me to teach them to brew or will slip me a few bucks to fill a keg. It's super flattering and I'm happy to give out beer.

If you are going to do fermentation, I recommend these.

Alembics are cheap and always good to have on hand, though in my experience they are rarely "needed"

I'll be interested on hearing how your work for the vegetable stones goes. I'm doing the same.

I've been out of the game for a bit, brewed quite a lot with my brother but the last few years he's not lived close and I haven't kept up.

I'm looking to get back into it. But living in an apartment I'll probably start with 1 gallon batches.

I've got a brew pot that will definitely be big enough so I'm set there. I also have some one gallon jugs that I could probably just add an airlock to but I'm thinking of getting some wide mouth ones just to make cleaning easier ([link]).

What other gear should I pick up as a necessity or as something that would simply be nice to have?

I got a 2-pack off amazon. I think these were the ones.

They’ve been working great! I just need to stop over-filling them.

They were 18$ when I bought them, but some local homebrew stores tend to have them in stock too.

It's easier to use something like this with a wide mouth. I used that and put my fruit in a cheesecloth bag. Easy cleanup of the fruit and easy to squeeze it out to extract the juice too.

Sure thing. I use the fairly common one gallon jar with lid and twin bubble airlock. If you have a brewing place locally you can likely pick up these supplies for considerably less than online. For things that don't require an airlock I use the same jars but place a large coffee filter over the top and secure it in place with a rubber band. Works just fine.

The higher the ABV, the longer the aging time. The wiki has a lot of good info and some recipes. A packet of yeast will do 5 gallons, so hydrate and refridgerate the rest and you will be able to do many small batches. 1 gallon jars are avaiable from Amazon. I like the wide-mouth, easier to clean. https://www.amazon.com/Home-Brew-Ohio-Drilled-Airlock-Set/dp/B07115V3F7/ref=sr_1_5?crid=2CKNTCW8IP9L6&amp;dchild=1&amp;keywords=one+gallon+brewing+jar&amp;qid=1601314317&amp;sprefix=one+gallon+brew%2Caps%2C214&amp;sr=8-5

You can get em on amazon, here

I purchased them though amazon

I got these of amazon

I have these ones, they're glass and the lids fit well.

Looks very similar to the ones I buy above. Haven't had any issues with them.

I got these 1 gallons from amazon and use them for fermenting peppers: [link]

I have 4 of these, great cost, easy to clean

The one gallon are these: https://www.amazon.com/gp/product/B07115V3F7 . They come with lids and airlocks. I "made" the other lid using an old airlock and grommet from my beer making days.

This is the recipe I am trying out this year with a mixture of golden cayenne, ghosts, and hot banana hybrids.

Picked these up off amazon...can't wait to harvest.