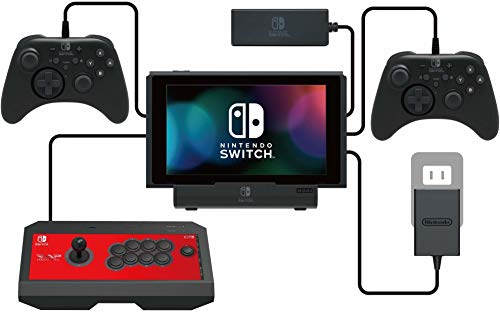 This product was mentioned in 27 comments, with an average of 1.48 upvotes

At the very least get one of these so you can play tabletop and have a LAN adapter plugged in too.

Smash 4 over WiFi is not fun, the more people that have wired connections the better the experience will be for everyone.

>Main advantage against the first party thing is that you still get all your USB ports. And for me personally that you can pull out the brain of the box and use it as a dongle for your laptop/phone.

If people are just concerned about tabletop mode while charging and USB ports,there's a solution for that as well. Current pricing $28, and folds really slim. I LOVE it, but for me the jumpgate is a different solution entirely (we want another dock and also something to run Samsung dex). I'm sure I'll find other uses for the core drive as well.

Nope. Docks turn off the screen when powered, and when un-powered the USB ports wont pull power from the system.

You would want one of these bad boys for one the go play. looks like a basstop slim dock, but isnt a dock.

Simple question here; Is there any safe (Or reasonably safe) method of both having the Mayflash NS plugged in, while also having the capability of plugging in the official Charger, in tabletop/handheld mode? ( I can't stand using the Joycons on the go anymore since I started using my Dualshock 4/GC/Etc controllers)

Not looking to get an HDMI output/third party dock mess here, but simply 'is the bricking problem present if you use a USB C hub with the official charger'.

The only thing coming to immediate mind is the Hori portable stand with it's USB slots, but I'm simply looking for something a bit more compact 'on the go'. ([link] ) $40 for this thing seems a bit 'intense', especially with zero desire to HDMI output (not to mention it lacks that option ANYWAY). But if it's the only option...

tl;dr Is there anything else like this 'safe' to use, or should I assume only Nintendo (And HORI) know how stupid the USB-C Protocol of the Switch is? Or is any USB-C Hub safe as long as you're not trying to HDMI-output to a TV? (I prefer playing purely handheld, it's my on the go buddy).

Finally, for the reasonably insane: Any recommendations, be they 3D Printed or Third Party, for a Controller Mount (Similar to smartphone controller mounts for android users)? Curious to see how unwieldy holding up a GC/DS4/etc on the go with the Switch 'tablet' would be. Thanks in advance. Otherwise, I can just make my own.

You can also use one of these. [link]

You are probably going to want one of these to maximize your usb connectivity. Though something of note is that a USB bluetooth adapter for audio will disable all of the USB ports. But as long as you don't need to use that this is very useful. [link]

I saw this officially licensed tabletop mode usb hub and I was wondering if there was simply an accessory to charge my switch and use one usb accessory at the same time in handheld mode?

HORI's USB Playstand is exactly for that purpose.

That's probably what you're looking for, but it won't be available until July. As an alternative, you could try Hori's USB Playstand which will allow you to plug in a normal GC adapter.

You would need a multi-port adapter or playstand, Like this one

Google and the search bar of this subreddit are your friend....

This is what you want.

HORI has got you covered.

Gives you a charging port and two powered USB ports.

Hori's Multiport USB Playstand is a stand (not a dock; no HDMI output) for the Switch that has 4 USB ports.

Hori Multiport USB Playstand is made specifically for this purpose

Edit: that is if you play on tv mode. Otherwise you will need a play stand like this which may not be ideal if i read your post correctly.. I am using it personally and no issues to report but that’s because i do not have a tv!

Hori's USB Stand works if you wanna spend the money on that.

This Hori USB stand actually does make it possible to use a gc adapter/controllers in tabletop mode.

Hori's USB Stand works if you wanna spend the money on that.

Both the pro controller have their strength as weaknesses, so it really depends on what you value more

GameCube controller: Pros: * Comfortable to hold * Really well built * Near universally used for tournaments * No lag because it's wired * Don't have to worry about battery life * Analog shoulder buttons * Notches for the C stick and Analog stick so your directional inputs will be more precise

Cons: * Only one trigger button * No Home, Capture, or second pause button * Requires an adapter to use * Can't use in handheld mode unless you get a portable dock * No motion control/HD rumble/Amiibo comparability * Lack of buttons and features makes it hard to use for other games * There will likely be supply shortages when the new Smash Ultimate GameCube controllers come out

Pro controller: Pros: * Very comfortable to hold * Really well built * Has an extra trigger button * Has a home button, capture button, and a second pause button * Has motion controls, NFC/Amiibo capabilities, HD rumble * You can use it in handheld mode without having to buy additional accessories * Fully compatible with other switch games * Convenience (you're not always going to have access to a GameCube controller, but you're always going to have access to something with a similar button layout to the Pro controller)

Cons: * Digital triggers * Lag (you can also use it wired but that can actually make the controller more laggy than playing it wirelessly) * Battery life * No notches

Like I said, both controllers feel amazing to use and are comfortable in your hands, so it all comes down to your own preference.

A lot of the GameCube controller's problems (like needing a wired connection and the lack of buttons) can be solved by buying third party controllers. I know PowerA has a wireless GameCube controller with all the extra buttons and features coming out soon. It is important to note that third party GameCube controllers have a history of bring poorly made and breaking after a few weeks. Hori also has a portable stand for the Switch with a bunch of usb docks that you could use (I don't know how to put links into text because I don't really use Reddit that much so I'll link it below). I would be careful if you're going to use it because third party docks can brick your Switch.

Edit: Some formatting stuff and moved the different trigger types under a new miscellaneous category

You have to go for the non-imported version to get MSRP.

So I've been playing Smash a lot on the go and I've been looking for a good solution for using a gamecube adapter on the go. I've heard bad things about 3rd party docks but if I just use this dock be ok for me just to use as a USB hub, or is it still going to fry my switch?