What is reddit's opinion of HORI Tough Pouch (Black) for Nintendo Switch Officially Licensed by Nintendo?
From 3.5 billion comments
created by @mouseofleaves 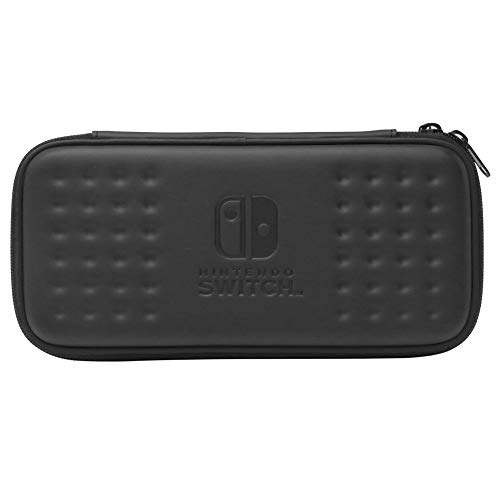 This product was mentioned in 31 comments, with an average of 0.94 upvotes

I use the Hori Tough Pouch. I don't have any problems with it, other than I think the elastic band is a little unnecessary and makes it slightly annoying to take the Switch out of the case; but it's not that big of a deal.

Here’s the one I use.

Mine came with this one in a bundle, so I don’t have experience with any other case. This one seems like it would protect my switch, if I dropped it, but the other one seems much sturdier!

I have the Hori Tough Case and could not be happier. It feels sturdy, yet quite easy to handle and it does an excellent job at protecting my beloved console.

Something I would suggest is putting the Switch is a case such as the Hori Tough Pouch. Not so much for added protection but to basically smooth out some of the odd shapes the Switch has when you pack it with other gear. The bonus is you don't get the Switch accidentally turning on with that system and the system lock enable (press same button three times to turn on).

This. It is the one I have, its cheap and holds console, joy con straps, and games all snugly.

Yeah the case is great. It has a slot where you slide the cartridge in so you don't need to lug around the game boxes. Link below:

I would be asking for 475 shipped. I still have the original box for the console itself, and the pro controller. To put it in perspective, I spent close to $600 when all was said and done. Didn't play much handheld, mainly used docked with the pro controller. Adult owned, smoke free home. All that jazz.

I don't want to sell but we just bought a house and I need money for a lawnmower. Check my post history - just sold a ton at /r/hardwareswap when I broke down my gaming PC.

Glad to answer any questions.

Honestly never bothered with Screen Protectors for anything. Don't use them for my phone or my Vita either. I have a carry case for my Vita and a normal flip-open phone case. That works well enough I find.

Would recommend you pick up this case - [link]

I like the Hori brand case. Used them for my PSP, Vita, and 3DS. So I know they're good quality. So long as you look after your device, there's no reason you should ever have the screen scratched. Just remember, don't pull or tilt towards yourself when taking the Switch out of the dock, that's how the dock ends up scuffing the screen.

I have [link] and Im quite happy with it. Travel to work every day with it in my backpack. My only concern is when I have more than 6 games. I trade in a lot so it may no happen for physical anyway.

Going by Amazon review, the Hori case looks promising. I think you could probably squeeze in a cell phone wall adapter.

This is the official one. I bought it and it's great. [link]

First one is more elllaborate, the official one is very simple, seems like won't do too well with drops. I went with this one: HORI Tough Pouch (Black) for Nintendo Switch Officially Licensed by Nintendo [link]

Oh man! I haven't found anywhere in the UK to buy this, I think the case looks quality and robust. I went for the Hori one from amazon!

Its rather boring, nothing like the Zelda one melts

Hori tough case. I love my Hori case for my N3DS, so that was an easy decision [link]

Also wanting to get the PDP backpack if I ever find out what it looks like on the inside!

I went with Hori's case simply because I've been getting their cases since the DSlite. I feel I can trust Hori's build quality in terms of protection, I always throw a portable in my bag for commuting so I know they can take a beating. I can always just get another case when others hit the market or if I feel like it doesn't tic every box for how I wind up playing the system.

I went with the Hori brand since I love the one I have for my new 3DS: [link]

I'll probably get something else for actually traveling with the Switch, like the PDP backpack.

i like this HORI one a lot more, but I really wish they had a plain black one like the Zelda one though.

I have this and it's pretty great. Only 5 game cartridge slots though.

This one: Hori NSW-038U Tough Pouch for Nintendo Switch?

[link] this one here? i have a mumba case and NEED a case that it will fit combined with

The shell is harder than the official case, it fits 5 games and the Joy-Con grips.

My EDC for the Switch is as follows:

As covered above I start by packing the Switch, with JoyCons on into the Hori Tough Pouch which was my original carry case. The Tough Pouch also has a spot for five carts and two straps matching the JoyCons attached to the Switch. The Butterfox Carry All gets quite tightly packed so the added protection is nice and doesn't add much to the thickness.

On the inside of the case the A-C cable goes into the inside back pocket. Next up moving from back to front are the u-Jays which fold flat in their dust cover bag. The is followed by the Tough Pouch. All that is behind the wide movable divider from the Carry All. On the front side of the divider the space is split in half by the short divider from the Carry All. Looking towards the front of the bag the JoyCon grip goes on the left, Pro Controller on the right, both with buttons facing forward and shoulder buttons to the outside.

Inside the flap of the Carry All are two zipper pockets. In the smaller pocket goes one of the Pixel chargers and the two remaining straps. In the larger pocket the a-Jays Five in their protective case (looks like a small hockey puck) and the second Pixel Charger.

The left and right inside walls of the Carry All have three game cart slots each however I find the version I got makes them, in my view, unusable. Of the three the front and back both come very close to overlapping with the zipper while the middle has reasonable clearance however lacks the depth to really hold a cart as securely as the Tough Pouch. If you wanted you could use them but I haven't needed to yet.

Honourable mention to my ORLZY tempered glass screen protector which is permanently on my Switch and doesn't really warrant its own packing requirements.

That said I have to wonder if the Anker USB C to 3-port USB HUB with Ethernet would work with the Switch. Yes, Ethernet in tabletop mode. The USB hub could also allow wired controllers like the Pro via cable or Pokken controller.

I also have a couple different designs of the PowerA game cases pre-ordered as my upcoming game pre-orders will mean I need more travel/storage space for carts. Not sure where exactly it will fit into the Carry All yet.

In the medium term I also plan to get a battery bank such as RAVPower 26800 PD but haven't settled on a specific one just yet although that one currently tops my watch list.

This one is perfect in my opinion I got it like a month ago. [link]

This seems to be the top hit for people: [link]

I'm getting the Hori case. It's a few bucks more than some of the others but I like the design and the presence of the logo. [link]

Just looked it up, mine is "officially licensed", not just outright "official"

Looks almost identical on the inside to the official one.

Are you talking about the tough pouch?

Can confirm, great case for just the switch if you are not interested in the accessories as well. Form fitted and good protection overall.

I use this carrying case by Hori. It has room for extra cartridges. There should be other designs.

Which one? Caseology, Hori, or Butterfox?