What is reddit's opinion of In the Buddha's Words: An Anthology of Discourses from the Pali Canon (The Teachings of the Buddha)?
From 3.5 billion comments
As an Amazon Associate I earn from qualifying purchases. 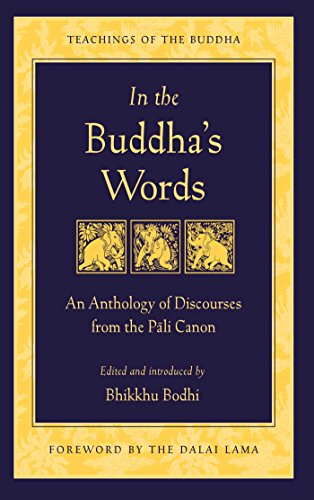 This product was mentioned in 15 comments, with an average of 1.13 upvotes

Not Rks1157, but I've already asked him this question, and he recommended reading as much as possible from the Buddha's original teachings, as cited in the Pali Canon.

This recommendation brought me to the most important book I've read so far (out of several): &quot;In the Buddha's Words&quot; by Bhikkhu Bodhi.

You can get it in digital and audio form from Amazon. I recommend the audio form, since it is so powerful to listen to these words rather than read them.

This is the book that really kickstarted my journey through Buddhism:

Great primer and intro to the Pali canon.

Alright, if you are going to be a librarian you're not scared of books. Here's my opinion, then.

these are for basic theravada. I can't really recommend any pure-land exclusive texts, if that's what you're looking for.

Fat Buddha is not the Buddha, that is Budai who is a 9th century Buddhist monk. He however is believed to be the future Maitreya Buddha.

As for where to start .. I have a few places to help guide you:-

You can read the following:-

You can also buy the following books which will be well worth your while:-

These combined resources alone should be sufficient to start you on your journey in Buddhism.

From a Canonical source:- Dhammapadha would be a great place to start.

Bhikkhu Bodhi’s book:- In the Words of the Buddha is a great place to start as well.

Thanissaro Bhikkhu’s:- Refuge is a free read that is good

I really enjoyed "In the Words of the Buddha" (https://www.amazon.com/Buddhas-Words-Anthology-Discourses-Teachings-ebook/dp/B003XF1LIO) and, on a more esoteric level, "You are the Eyes of the World," a translation of a commentary of a work by Longchenpa.

The Buddha's teachings were non-secular for a time before the establishment of the Buddhism's that exist today.

However the teachings of the Buddha has been altered to fit the cultural demographic of the regions it spread to.

It doesn't mean the teachings were lost, just reformed to fulfil a narrative and allow it to spread under a different brand.

If you are looking to learn the original teachings of the Buddha then you have to look at the Pali text in Theravada school which have preserved his teachings word for word.

I came from Mahayana Buddhism and eventually stayed within the Theravada school for learning.

Although the Theravada school holds the knowledge. In this day and age, what's being taught is out of context and it's difficult to relate.

So here are some readings you can use to get you started.

In the Buddha's words

What the Buddha taught

The essence of Buddha dhamma in meditative practice

>Wasn't it you that recently told me the importance of right speech? That if we can't be absolutely certain about something, we could be breaking the precepts by speaking about it?

I have said such things, yes. But, I am also not leading people astray by telling them the Buddha taught the precepts to be kept under any circumstances. If this is what the Buddha taught, how could I say anything else?

To be clear, I did not say people will go to hell for putting down a pet. That said, I'm not an authority, don't go by what I say about it.

Read what the Buddha said about it. Read the Suttas in which the Buddha talks about karma, about the precepts. Find the scenarios in which he advises his monks that it's wise to break the precepts. Decide for yourself. A lot of people have an idea about what the Buddha taught based on... assumption, or heresay, or something they made up. But the Sutta Pitika is there for the reading. I started with the Samyutta Nikaya. dhammatalks.org has excellent anthologies on the suttas, go to "books" and then to "suttas" they're all free to download. Bhikkhu Bodhi's anthology is quite authoritative but not free, it can be bought on amazon:

A lot of people are confused about what the Middle Way means. I can tell you, it doesn't mean "sometimes keeping the precepts and sometimes breaking them." (it also doesn't mean "moderately indulging in sense pleasure" as people often like to think).

But don't take my word for it. Read what the Buddha said about it. I linked you the resources above. Read what the modern-day arahants say about it. Many of their teachings are also free in the above website.

Other answers in this thread all great and all worth looking at.

To give you one more:

I recommend joining meditation practice with studying the Dharma. The ideal would be if you could attend classes with real teachers.

Books can also be a wonderful guide. Depending on your taste:

The phenomenon you're noticing is because Buddhism is very old, very flexible, and very nomadic. It originated in India in one form, broke into different forms after the death of the Buddha, spread to various surrounding countries and absorbed and evolved with their own traditions, then changed again when it came to the west.

The second issue is that, whereas other religions tend to have one or two key texts (like the Bible), Buddhism has a whole library of them known as the Pali Canon. So there's a lot more material from which competing translations can be derived.

The core thread that runs through it all though - the noble eightfold path - is common to all schools, so start there.

The Mahayana path retains the eightfold path but adds a 'Bodhisattva path' to it, essentially shifting the perspective from the individual to the good of all beings.

IMO, the best guide to the core teachings is Bhikkhu Bodhi's In the Buddha's Words

Indeed it is inevitable. I mainly felt the need to ask because most people that come to the religion and stay are somewhat discontent with life. They notice things like how nothing is satisfying, controllable or permanent. You seem pretty upbeat and happy, which isn't the prototype for the typical follower of the Buddha. So, does it stop you? If not, I'd recommend to start meditating. That's the best way to figure out if the religion is for you because it is integral to the entire religion. Its' scriptures describe it, detail the goals of it, how to use it to purify the mind and much, much more.

There are a couple of options that I recommend for beginners. One meditation technique involves strengthening concentration before moving onto insight meditation. That method is discussed in detail within Mindfulness in plain english. The other method starts you off working on concentration and insight at the same time. I feel this method is faster and more efficient but I'm biased because it's my method of choice, even though I started with the Mindfulness in Plain English technique. Here's an instruction booklet detailing that method.

Also, I would recommend reading "In the Buddha's Words" which goes through a thorough overview of the core teachings of buddhism using the scriptures (pali canon). I haven't seen a pdf for it, but you can buy it on amazon for $10.

Don't know which tradition you're following, but I recommend In The Buddha's Words. [link]