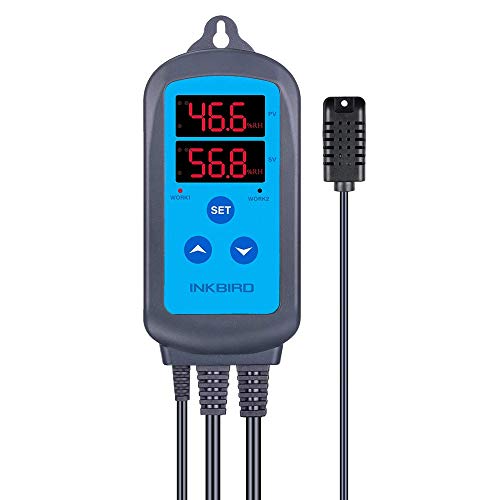 This product was mentioned in 22 comments, with an average of 1.36 upvotes

It is also one of the only ways you can get perfect drying conditions as well. Definitely top 2 things I have purchased for my grow setup.

This was the one I purchased [link]

I bought a humidity controller on amazon and plug my humidifier to it. I have it set to turn on at 70% and shut off at 80%. I have a couple dozen orchids and a couple dozen nepenthes.. here is a link to the controller [link]

This is what i use for humidity.

A hygrometer is a good thing to have. If you can keep the RH up early in veg, you'll get faster growth. Maybe even consider a humidity controller. I just added this to my grow and love it.

What are you going to grow in? I'd suggest either go fully synthetic and run coco or DWC or, go organic soil. Most people try to split the difference and add liquid nutes to OK soil (Like FFHF) but I have learned that there's a better way. If you want tyo grow in soil, get a bagged super soil like Michigan MAde Mix or SoHum soil. Just add water for the entire cycle. Ramble over. GL.

I’d try and keep the rh with your flowering girls lower than your drying space. Temps would be fine. But if you have colas touching(or even just huge ones) and not enough air flow then mold could grow in those spots.

I’m in a similar situation as you. Turning my AC down lowers RH though. If that’s the case, Something like this could be really helpful for a dry space. If your rh goes up for some reason with more AC you may need to rotate them frozen jugs to keep your grow tent in check

Thanks, I'm interested in looking at this option. Is this the Inkbird model you use?
If all goes well, I'd love to add orchids to my viv, too.

I have a humidifier wired to one of these so the humidity doesn't get too high in my room.

They make "crawl space dehumidifiers" just for this purpose. More expensive than the "regular" ones, but they are designed for basically permanent installations. They may, or may not, have condensate lift pumps so plan that out too.

If you want to back-hand it, a window AC unit is basically a dehumidifier. Plug it into a humidity controller.

I use a 1 gallon humidifier I bought at the local store and an Inkbird humidity controller from amazon.

Enter your humidity level parameters and the controller does all the work for you. This controller works amazingly well!!!! Just make sure the humidifier turns on when power is applied. Some humidifiers require you to push the "on" button which defeats the purchase of the controller.

Stay away from the tiny personal space humidifiers, get a big dog that has a capacity to hold enough water for a 1/2 to 1 day. I go through 2 gallons of water in a 24 hour period.

I'll have to look into those. Everything else of the deer was already ground. The only whole piece is a loin. But I may trim it down or even halve it lengthwise to thin it for curing purposes. I'm setting my chamber up with this humidity controller which hopefully should keep my levels consistent but I won't be surprised if it takes some fiddling with.

This is the one I ordered earlier [link]

I preface everything I say with the fact that I'm a noob (3 months, fruited about 6 to 7 blocks successfully with multiple flushes), but here's what I've found. Lion's Mane, as I mentioned, is super sensitive to windburn, while Oysters aren't. Seeing as those are the only two mushrooms I grow, I have my martha setup to pull air from the bottom via one ACInfinity 80mm fan running full time (as opposed to pushing in air at the top, which ended up burning my LM a bit). The reason I moved to this is because I think that CO2 removal is critical - since CO2 sinks to the bottom, an exhaust fan - in my setup - has proven more effective than an intake fan. Since I initially rigged up my martha with only intake fans, I kept the holes they were in, and taped them up in a grill like fashion to serve as air-intake points to complement the exhaust fan on the bottm. This way, I get a constant stream of fresh air without the force of an intake fan at the top.

I had used 2 fans to start with but found that it would KILL my humidity. I thought about having them cycle a few times a day, but I found it actually easier (though not likely economically more efficient) to simply have my humidifier run constantly (which is a repti-fogger piped over and through the top of the martha) as well as the exhaust fan running constantly. In this state my martha stays at 80-85 relative humidity. Yes, it is using a ton of electricity and water, but I haven't had time to dial in things more precisely where I have the fans only intermittently run. And because of the small reservoir on the repti-fogger, I keep having to run to refill it. I'll be dialing in things very soon and can keep you posted.

One point of note: a humidity controller is critical for piece of mind - I use the cheapest Inkbird one you can find on Amazon. It allows you to have a constant sense of the humidity as well as beep an alarm if things dip too low, all configurable quite easily.

Good luck, and I'm happy to answer any questions you may have. So many folks helped me out, so I try to pay it forward.

I strongly recommend at a minimum two tech items:

Those are the two I consider pretty essential in my setup

Too much to burp with big yields

I drilled holes and cut to get sensor in. It’s the black RH Sensor on top of the bucket. I made hole and fished it in and used silicone to fill hole (make sure you allow long time to dry and cure!!). - The hole by it that you can see, with the 1/4 tube goes out to a check valve so the air escapes there but it’s sealed.
- The buckets have gamma seal lids to seal at top. - The bottom of the bucket has another quarter inch hole with a tube that barely fits into it, it then winds in a circle through the bottom of the bucket in a circle. I drills small holes every 6-8 inches in it (before I installed) to evenly disperse the air. - The buds themselves sit about an inch above the bottom of the bucket on a curing screen that was actually designed by cure cork to sit in buckets to hold buds. I didn’t want them resting on the bottom of the buckets. - obviously I chose food grade buckets and lids - the bottom tube goes out to a 1/4 T that has a check valve on both sides of it. Both sides go to two different air compressors. 1 controlled by the humidity gauges, the other by a timer for daily guaranteed burp. If I did it again, I’d put another tube through into bottom now i know they seal so well.

I wet trim, have on net to dry for first 4-7 days, aim for 7 with temp and humidity controls. Move to here to cure instead of jars, no manual burping. When done here I transfer to permanent storage but if needed I could store in here too, I just need to use the bud and have this available for more.

I got the cheap version, though I think their Bluetooth one is now pretty cheap too.

Like I said, I don’t find the humidity one that useful and it sits in the closet unused.

Here’s the controller for reference.

You can try one humidity controller to control the humidity level.

Try this one. May help you.

You can buy a humidity controller off Amazon to take out the guess work. [link]