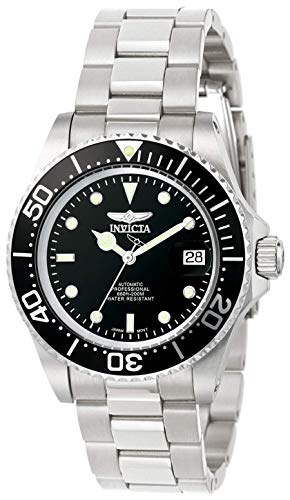 This product was mentioned in 32 comments, with an average of 2.38 upvotes

Actually, this Invicta comes with a Seiko movement. It's frequently purchased as a base for Seiko mods. It and the others in its family are probably the only Invicta watches I'd recommend, and then only at $80-95.

Past that, yeah I'd say go Orient or Seiko.

I bought this watch and so far it does everything i need it to do. they are cheap and do the job. However one thing the night glowing thing (idk watt it is, is it paint or crystal idk) it bad u light a flashlight under it for 2 minutes it will light up bright but after 30 min you cannot see it at all. But for 85 i will recommend it

I would like to mention that this watch goes on Amazon brand new for $79 right now.

Thanks a lot! Might be a weird question, but you never looked into getting any Invicta did you? been looking at getting myself a nice divers watch and I'm torn between the one you posted and this. [link]

I finally decided to get a diver/nato setup. I've been a fan of Invicta for years, because I can afford them and because my first 'real' watch was an Invicta, so after searching for a relatively cheap, classic diver, I went with the 8926OB Pro Diver Stainless Steel Automatic. I'm also a huge fan of automatics and although I was worried about the back display glass protruding too much causing the watch to sit too high off the strap, it turned out fine. Bonus is that the picture on Amazon's site of the movement's weight was rather boring, but you can imagine my reaction when I turned it over in real life and saw that beautiful yellow. All said and done the watch and 3 straps cost $122, which I think is just fantastic. I'm super excited to wear this all summer!

Automatic Invicta pro diver is what I would suggest.

My friend has had his for 9 years and its still going strong. I lost mine after over 4 years, I showered, worked out, bumped into doors and concrete, and swam in the ocean with mine. It was great until I lost it. Don't take it off, and it will last until the oil runs out.

I can't speak for it's quality because I don't own it, but I like the look of this. It's an homage to the Rolex Submariner.

Ok, so interesting thing about Invicta, is that even they don't think their watches are worth MRSP. The high MRSP is just to trick people into thinking they're getting a deal.

MRSP is $495, which is absurdly overpriced for that thing. However, even Invicta's official store only sells it for $122.85: [link]

At the gray market price, it is actually a pretty damned good deal. I mean, it has a Seiko NH35 movement, which you can't even get on actual seikos at that price point.

Invicta pro diver - ~$85. has a Seiko automatic movement and a huge aftermarket following

Parnis sub Homage - $112. decent all around watch...nothing fancy, but has a Miyota movement which is reliable

Phoibos Great White - IIRC can be found for about $200 or slightly under on Ebay. same movement as the Tissell. seems to be a newcomer to the homage game. nice offering from everything I've seen.

all are pretty good bangs for your buck. the Cyclops kinda goes hand in hand with the "Looks like a Submariner" aesthetic. it's going to be hard to find something that doesn't look VERY similar to this watch.

I recommend starting off on the less expensive side and upgrading as you figure out what you like.

I saw this deal on Costco today https://www.costco.com/Invicta-Pro-Diver-Stainless-Steel-Men's-Watch.product.100454665.html

https://www.amazon.com/Casio-MDV106-1AV-Analog-Watch-Black/dp/B009KYJAJY/ - I'd swap the band with a NATO strap.

Do you think a 2-piece horsebutt would work well? Or maybe another variation?

So far ive narrowed it down to this [link] this [link] and a seiko 5, though i havent chosen on a design yet. any opinions? forgot to mention this will mostly be worn in casual clothes to school, although i would like to be able to wear it with semi formal clothing too, in case the time comes.

That's the silver I have. Not selling though.

the one Invicta anyone in this sub would ever find them selves recommending: 8926OB

I have them both...along with about 40 other watches lol. They have the Seiko NH35a self winding movement in there. Solid daily watches sub $100USD in my opinion.

Also might be worth checking out Skagen if you are a fan of minimalist, light weight watches. I have one in my collection and love it.

Feel free to dm me if you have any questions!

The Invicta Pro Diver was my first auto. I know there are a lot of people in /r/watches that don't like Invicta but I thought it was a good watch for a daily beater (especially considering what I paid for it),

However, the Seiko seems like a better watch to me. It feels more substantial and the overall look and finish seems more interesting.

The only place where the Seiko falls short of the Invicta is that the Seiko is a non-hacking movement while the Invicta is hacking. This doesn't really impact it's value but it bugs me when I can't set it to exactly the correct time (even though I know it'll probably drift five seconds by tomorrow anyway).

The Invicta doesn't get much wrist time anymore as my Steinhart OVM has replaced it for everyday use. I do find myself switching up the Seiko when I want to wear something a little more colorful or sporty. Also, as evidenced by the photo that started this post, I wear the Seiko when I want need something that I'm not afraid to get dirty.

Watch choices, obviously, are very personal decisions. You have to decide which is right for you based on esthetics and value (both real and perceived). I'm not unhappy I bought either watch and they both have a place in my collection.

I just bought a Invicta 8926C automatic watch a few months ago. I am very happy with it. Yesterday, I ordered a Fisher Space Pen, so I could have a nice pen to write with (Ok, maybe the pen is a big geeky, but it's still analog), and I have Moleskines all over the place. I have also taken to using Piccadilly notebooks. They cheaper than Moleskines and look the same.

I used to have a similar looking Invicta. Can you tell me what's special about this movement that makes it more expensive? Looks like these are constantly selling for around $300 new.

Does anyone know of an automatic watch under $100 that has a tachymeter. Something like this.

This is half decent Invicta

Don't buy a fake, and especially not a Rolex. Get an homage if you really want something of that style, but no one on this subreddit will support the buying or wearing of a fake.

Genuinely curious to know. Not a super watch guy myself.

Just because there exists a Chinese ripoff for that is functionally identical doesn't mean a watch design isn't original. For instance, you can get the original Rolex Submariner, or you can get the near identical Steinhart Ocean One

Besides, as crappy as MVMT's construction is, their movements are all Myota. All those chinese clones use no name chinese movements, not exactly the same thing.

But the important thing is, when we're discussion fashion, is that very, very few watch companies have unique design like MVMT did. For instance, everyone knows what the Rolex Submariner is, that is the "template" for what I consider the generic dive watch. There's straight up clones, but there's also loads of companies that just make similar looking products, like Seiko, Mido, Certina and others.

Sure, the internals are different (but honestly, how different? there's the automatic and quartz ETA/ETA Clones, Ronda, Miyota, Seiko, Seagull, and that's like, 85% of the movements out there by volume?), the construction might be different, with different finishing and stuff, but the truth is, for many, many years there were few truly "out there" designs in watches. From a design perspective, the majority of people were picking between say, skeleton hands or sword hands on watches that more or less looked the same.

MVMT actually had all original designs. Until chinese clones showed up, their design was truly original, there isn't a single thing on the market that looked like them.

Both are pretty great looking watches and may not be as good of quality as the Orient (not really sure about this tbh, since both the Orient and the Invicta seem to retail for $350+) but hard to beat the price point on them.