What is Reddit's opinion of iTeknic Water Flosser Dental Oral Irrigator for Teeth Brace Clean with 10 Adjustable Water Pressure, 600ml Capacity, 7 Jet Tips, 180Sec Electric Professional Flosser for Family,FDA Approved?
From 3.5 billion comments
As an Amazon Associate I earn from qualifying purchases. The following content includes affiliate links for which I may make a small commission at no extra cost to you should you make a purchase. 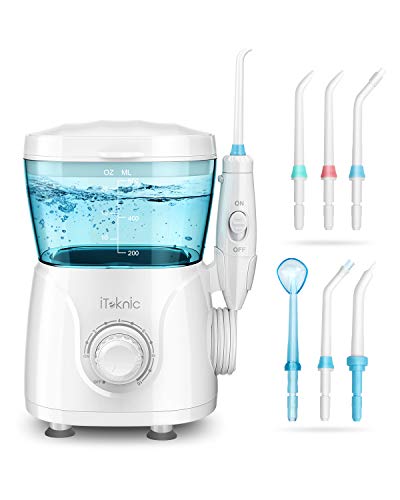 You should look into buying a water flosser. It really helps to flush out bacteria that loves to live up under your gums. You can get cheap ones on amazon for $30 to $40. It really has improved my oral hygiene. I combine it with flossing and I can see and feel a big difference.

There are quite a few on amazon, here is one example.

Yes, many people's dental hygiene suffers because of depression and anxiety, some because of mania or psychosis. Mental health and physical health are linked intrinsically.

First, any time someone talks about this being a problem for them, I tell them that the solution to your problems is a war flosser:

The great thing about them is that, even if you use one once a month or every day, the point at which you do it basically power washes your gums and teeth and without any effort, you can get the cleanest gums you've ever had without adding extra effort to floss. Don't want to brush? Whatevs. At least fire this bad boy up when you have the energy and give your gums some serious relief from the constant attack they are under by the volatile kingdom of our mouths.

Never had someone I suggested this to who was depressed who DID get one that didn't say "holy shit" so I urge you to stop trying to make yourself brush as your central choice, options are awesome, and, again, this thing will power wash your teeth for you, even if you haven't flossed in a month and barely brushed your teeth, this thing is like the machete of mouth cleanliness.

Straight up. If you had floss sitting there and this machine that revolutionizes your mouth in about 1 minute and a half, my hope for anyone is they wouldn't want to continue to strangle their fingers while they put their hand in their mouth to do a mediocre job of cleaning it when you can just shoot some water at your teeth and actually put pressure on the gums on the top of your teeth where floss doesn't go.

Second, are you seeing a therapist and/or are you on medication?

Ahh I got this water flosser and it’s an absolute joy to use.