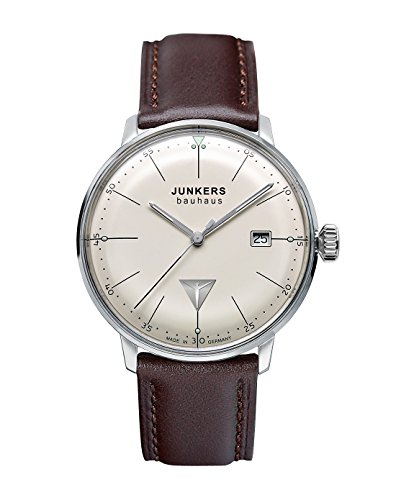 This product was mentioned in 8 comments, with an average of 1.13 upvotes

I found a few watches in amazon which seem to fit you requirements. Let me know what you think!

It's one of my favorite sessions but that's unrelated - I dig his shirt and REALLY dig his watch. Any ideas?

If anyone wants to try their luck with a better quality shot, or just listen to some amazing music, here

EDIT: Could this be a Junkers Bauhaus?

I am totally stuck on what to get my boyfriend and thought I could try for some help anyways. I know practically nothing about watches.
&nbsp;

Things I do know:

I have currently narrowed it down to RoddinaST17 (not linked due to ban oops), Brathwait, Tsovet SVT-CN38, or maybe the Junkers bauhaus. I have ton a fair amount of research but I'm still unsure if any of these are the correct decision for him. Any opinions? Very much appreciated. I have been poring over this subreddit for the past week learning a bit about watches, and while I'm more confused than ever it has been fun!
&nbsp;

I had a Nixon The Sentry once.

It worked for a long time, but that was because I was very careful with it.

I dropped it on a (soft) floor once, and two of the indices came off.

If you want a good, inexpensive Bauhaus, Junkers is the way to go, IMO.

I'd also normally plug the Bambino V3, like /u/as_told_by_aaron, but since you don't like Orient, Junkers is my pick.

The above link is Junkers' own web page, but they're also sold from Long Island Watch and on Amazon.

I have some experience with "fashion brands" namely Nixon, MVMT, Daniel Wellington and Diesel, and I'd strongly recommend spending a bit more on a watch from an actual watch brand.

It'll pay off in the long run. I promise.

I'm also a big fan of Bauhaus watches, but at your price range your options will be pretty limited. As others have pointed out, Orient and Seiko are the tried and true budget options, but also give some consideration for Mondaine, either the Helvetica or Railway.

Also check out Junkers, a German brand that makes a variety of decent quality bauhaus watches as well.

The previously recommended Rodina is supposedly a viable option, also. I say supposedly because the manufacturing can be a little inconsistent, as it's not made by one company but rather a variety of Chinese factories that churn them out. I've never personally handled one myself so I can't speak to the quality, but I do own the Nomos Tangente which is the design the Rodina knocks off and am very pleased with it. Way out of your price range though.

A company called [Tissell](shop2.tisellkr.cafe24.com) makes an option you may want to look into as well. They're Korean and from what I understand ordering can be a bit of a pain, but they are legit.

Good luck, and let me know what you end up going with!

RIGHT. ONLY 250$. I GOT IT BECAUSE I WON A GIFT CARD TO AMAZON. HERES THE LINK AND POWER TO YOU. BUY IT. OH AND IF YOU'RE A STUDENT USE AMAZON PRIME TO GET THAT BITCH IN 2 DAYS