What is Reddit's opinion of Kidde AC Plug-in Carbon Monoxide and Explosive Gas Detector Alarm | Nighthawk Sensor Technology | Model # KN-COEG-3?
From 3.5 billion comments
As an Amazon Associate I earn from qualifying purchases. The following content includes affiliate links for which I may make a small commission at no extra cost to you should you make a purchase. 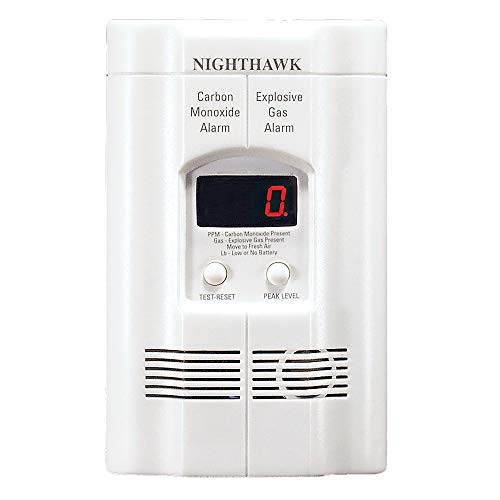 Idk if it's been said but you NEED carbon monoxide (CO, not CO2) detectors outside (and inside if you're like me) all sleeping and communal areas.

CO is odorless, colorless, and mixes evenly with air. Without detectors you will likely be unconscious or dead before you know there's a problem. CO is the byproduct of combustion.

It is different than your source fuel which is likely natural gas (NG) which is odorized by the utility company to make leaks detectable.

The best detector I've seen for household use is the Kidde CO/Explosive Gas Combo Alarm that plugs in and has a battery backup.

It detects CO, NG, and propane. It's not listed as detecting methane but we had an alarm one night and when FD showed up their meters reported methane so it may or nay not detect methane which typically indicates a sewage/plumbing/toilet issue as sewer gas is mostly methane.

Sorry for the brain dump but CO nearly killed my wife a few years ago so I'm a soapbox preacher for CO alarms.

I highly highly recommend everyone buys one of these: [link]

If you have a gas leak or elevated carbon monoxide levels, it will go off.

There are a few manufacturers that make them, such as First Alert and Kidde. They're available online but also in home improvement stores. The one I linked is only $34.

These things typically expire after 10 years, so that's 3650 days of protection for 3400 cents. Less than one cent a day to possibly not blow up.

I've had some for years and never had one false alarm, but owners must be aware that aerosol cans are often pressurized with liquid propane and butane (because they're widely available, cheap, don't usually react with the contents of the can, and have an extremely convenient liquid pressure) - so spraying compressed cans near them may trigger the gas alarm. Just don't do that.

I know they're often used in RVs (for propane), but I have also seen CO/gas Kidde Nighthawk combos for residential use.

Not sure where those would be required by code. But it's pretty dumb to not require CO detection in schools.

This is what I bought (Got it for my garage/shop, not the RV...)

If your stove makes flame it's natural gas. Most people have natural gas for their furnace and heater (at least out here in California), though not everyone uses it for their stove. If you're in a rural area you'd have a propane tank on your property and you'd know about it. Propane is more dangerous than natural gas, as it's heavier than air and will pool at low points. Natural gas is fairly safe; a leak will generally rise up into the atmosphere.

If you are really worried, you can buy one of these. Regulations vary by state, and some states are starting to add gas detectors in addition to smoke detectors (Though here in CA I think we only require a CO detector, not methane).

Just want to throw this out there, for $50 you can get an explosive gas alarm. As easy to install as a night light.

It’s different than a carbon monoxide alarm, that detects a byproduct of burning the natural gas that can kill you. Many smoke detectors will also detect carbon monoxide. The explosive gas sensor is a metal oxide sensor designed to detect natural gas (methane) or propane.

I cannot for the life of me imagine why anyone would willingly swap from NG to electric for things like hot water heaters, stoves, and heat.

You can have my duel fuel range when you pry it from my cold, dead hands.

That’s good! I live in the exact same climate temperature wise. As a prepper in an apartment, I decided on a Big Buddy Heater; and when I have more money, I’ll probably get more to heat additional rooms. Make note of the minimum ventilation square inches they suggest. Following the lead of others, I also chose to get a combo CO/propane detector to use in the room the heater is currently in (even though I already have a CO detector, just in case). Unfortunately most of the ones I saw that can run on battery and include the propane/natural gas detection did not seem as reliable as I’d prefer (some too sensitive, some not working), but I do have a regular CO/smoke alarm too. The one I personally eventually decided on was the Nighthawk Plug-in Carbon Monoxide &amp; Explosive Gas Alarm KN-COEG-3 since it seemed like the best overall I could find.

If you get a CO and/or propane detector, you will need one that can also run on battery “backup” (most primarily run on electricity since apparently they require a lot of juice). Because of that, they seem to go through batteries fairly quickly- mine will go through about a 9V a day, for example. Yes, that sucks... but it’s better than chancing CO or propane poisoning, and seems the best system I have found- so I ordered a box of inexpensive Amazon brand 9V’s, and will buy more as I can so it could last more days.

My plan (according to what I’ve read about surviving winters with no electricity) since I have only 1 Big Buddy is to have it in the living room during the day, and then bedroom at night. They say it’s best to insulate the room with blankets or plastic sheeting, etc, especially if it’s not enclosed like a bedroom. I realized that we might start to go a bit stir crazy if we were enclosed by blankets, so I bought enough cheap 3 mil clear plastic sheets from Walmart to double layer (so more likely to hold heat) all the openings of the living room as we have more of an open floor plan, and tape them together with clear duct/weather similar tape. I plan on hanging them up with nails on the tops and sides to catch most of the weight, then taping the sides to keep the hot air in (apart from flaps to get in and out, and a space for required ventilation, with a window also opened for the required ventilation). Now I haven’t tested this yet, so I may have to end up adding more layers or blankets if need be.

The propane... another challenge of this. Well the 1 lb tanks connect as-is, but you will want 20 lb tanks. When you read the reviews and calculate how much propane you will need per day (depending on what settings/how often you run them)... Well you don’t need to run them all day or night or on high. But for me on my budget and with limited storage space in an apt.,, I am going to try to get away with maybe running it half hour on, half hour off on like Medium or sometimes low, to save propane. But even then, I can’t remember what it looked like when I calculated it... but a 20 lb tank might only last 3.5 days. I’m prepping for a medium to long term outage though- for you with a house and prepping shorter term, this probably won’t be a problem. So you can calculate how much you need.
But if you get the proper hose (look at it carefully- some require you also buy a regulator, but 1 does not), 20 lb tanks are much better. They last longer without having to replace them all the time (and this less chance for leaks too), are cheaper- and, I eventually realized I had to spend more money just to buy containers and locks just to store a bunch of little ones. Bonus- the same hose let’s you connect 20 lb tanks to other things that use 1 lb tanks, like camping stoves and lanterns, etc. **One trick I’m using that I learned is you can find used 20lb propane tanks online like on Craigslist for less than they’re worth (like even for $10-$15 each), then exchange them for full ones (which is cheapest here at Walmart, for like $15). Then bam- you pay $30 for a full tank, instead of like $50:).

The best alarms have ppm readouts which i highly suggest.

After 2 separate CO incidents in military housing we bought our own CO/Explosive gas alarms by Kidde.

You need the /dp/# at the end, you can put what ever you want beforehand actually.

You should also be able to get the First Alert locally.

You can buy explosive gas detectors. you know.