What is reddit's opinion of Kuman Electricity Usage Monitor Plug Power Meter Energy Watt Voltage Amps Meter with Digital LCD Display,Overload Protection and 7 Display Modes for Energy Saving (NO-Backlight)?
From 3.5 billion comments
As an Amazon Associate I earn from qualifying purchases. The following content includes affiliate links for which I may make a small commission at no extra cost to you should you make a purchase. 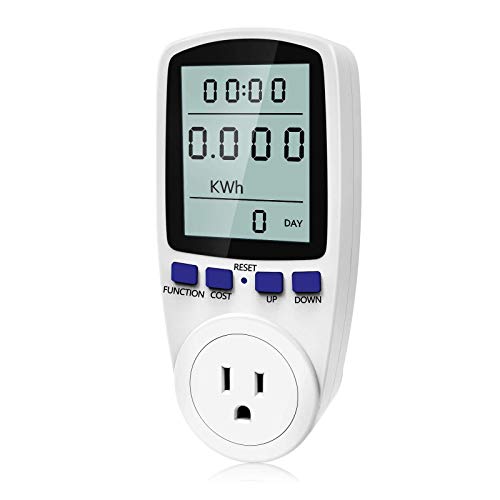 This product was mentioned in 33 comments, with an average of 1.70 upvotes

You can use a plug like this that reports the kWh used (not recommending this one in particular, just something like this): [link]

When was your mother’s house built, is it appreciably older?

It may be worth it to buy some sort of power monitor like this:

And see if you have dirty power or not. This may be venturing into “hire an electrician” territory.

What country is this? If this is the US, then as long as the place is less than 60 years old or so you'll have breakers that will trip when there is too much current draw. If you don't feel safe, then I'd buy one of these: [link]

It monitors your power usage in real-time so you can see the amperage drawn through the outlet. You can experiment and see for yourself what various loads draw.

As a CG artist who works from home, I do indeed factor in electrical costs with my contracts, andthese little badboys work wonders for keeping track of your electrical usage.

I only ask as the stress seems to be coming from his absent mindedness.. A few cold facts of life may be more impactful than busting his computer. Also you'd be better off pawning it than breaking it.. then he has to pay to get it back! Or he keeps it and pays for the power used [link]

You can if you export all your deposits and get the date you og started but its is way easier to just buy a meter because either way you have to fine out the exact wattage or amps it's using (wattage is easier) to get an accurate answer(NH only tracks your gpu power draw not the rest of the system) wich you need a multi meter or if you just get a outlet meter it does it for you some even couclate cost for you. This is the one use vhttps://www.amazon.com/dp/B07DPJ3RGB/ref=cm_sw_r_cp_apa_glt_fabc_FC8SHFWZAY5RFQG93AA3?_encoding=UTF8&amp;amp;psc=1 but it's for 110v it not that hard to do the math if you need. Google is a helper lol

If your fiance needs visual proof of how much your rig is costing you per month just get one of these:

You can program your electricity rate and it will show the wattage your drawing and how much it's costing you in realtime. Then reset the next month. This is what I use to track how much electricity my rigs are costing me.

Ah yes, I was going to say to remember to account for all the other hardware. But absentmindedly I forgot.

I would recommend getting a energy usage meter, that you plug in between the wall socket and the rig/computer.

Hi sorry here is the link for the watt meter

The ThinkPad would work great as home server.

I'm running my instance of nextcloud on a VPS on the cloud, but I'm running my home NAS (I'm using open media vault) on a ThinkPad x230 and it's great. I also run some virtual machines on it sometimes and jellyfin for media server. No issues.

I considered getting a Pi or equivalent, but I already had this at home, so I decided to go with it.

The main reason why I considered the Pi was for its low power consumption, but the x230 doesn't do bad either.

It no longer has a screen, it's just the bottom so I added a kernel option to completely disable LVDS and save a bit more on the power consumption. When idle (which is most of the time) it consumes less than 10W, which isn't bad at all.

Pi doesn't have a SATA port, you'd need a SATA hat to connect some disks to it (USB isn't reliable enough for a server).

With external power and some special cables you could even attach some big 3.5" HDDs to it (that's what I'm doing on mine).

If the your battery is still good it will work as its own internal UPS in case of power failure (you can use tlp on Linux to limit its charging to 50-80% maximum charge to extend the battery life.

Pi wins on the lower power and smaller form factor, but since you already have a spare T420 I'd at least give it a try.

You can use a power meter on the wall socket to measure how much power it's consuming. If you don't have one, you can easily buy one online or at an electronics store for about 15-20 bucks. Here's an example of one so you know what I'm talking about.

There's no way without using a power meter like a Kill-A-Watt or a cheap knock-off. Computers are already very good at using less power when it's not needed so you probably wouldn't see much difference.

I assume the amp specs are at max power. At less than max it should use less power because the lower volume is doing less work (moving the speaker cone less) but I can't speculate how much less. You could get an inline wattmeter and determine that yourself.

I don't think it went up that much. Get you a watt monitor and plug your Bobcat in and see.

you need to measure it at the wall with something like this: [link]

Get a power monitor off of Amazon

This support guy is misinformed. He's confusing the by-design feature with the bug. The first is where the laptop can go over 130 watts in certain cases (and maybe for a limited time). The second is where the laptop is unable to receive more than about 105 watts of power from the A/C adapter.

The next step is to ask to escalate the issue to this guy's manager, or try again with a different support agent.

The final step, if none of this works, is to buy something like this on Amazon: https://www.amazon.com/gp/product/B07DPJ3RGB/ref=ppx_yo_dt_b_search_asin_title?ie=UTF8&amp;psc=1. Measure the power draw while gaming. If your device can't pull over about 105 watts, you can use that data to prove to support that your machine has a problem.

Buy one of these and you'll for sure.

You can get a knockoff kill-a-watt pretty cheap. I think this is the one I have. It has worked well for me for DIY LED light testing.

I get it. If it gets the job done then, sure it's fine.

Yeah the TS1000 (and higher), while not anything extraordinary, are definitely a big jump up in output per watt because they have a driver and go from 60-70% power efficiency up to 90+.

The TS600 other similar varieties of low efficiency driverless lights like
this &quot;D&quot; version of spider farmer lights usually have that same extra circuitry on the face of the board in constrast with the ones with drivers that have only LED diodes on it.

I have two SP series lights that I am a fan of.

You can get a kill-a-watt, something like this [link]

These are cheap and we use them to take cost of electricity into account and subtract from earnings. kuman KW47-US Electricity Usage... [link]

you might have to just get a meter to see

You can get plug in meters that will tell you exactly how much a device is using and how much it has used over a day or month. [link]

this is the one I got. Has no issues with 12v all month long.

I didn't fully trust how much power NiceHash said I was using for GPU mining. And afaik NiceHash doesn't give you ANY power usage for CPU mining. On top of that, just today I found out that Octopus has a 2% dev fee. So I wanted to set up a spreadsheet to see what my actual profits are (and also to see if CPU mining is *actually* profitable).

Happy to see that CPU mining is indeed profitable after electricity (see the bottom entry). Also, at least right now Octopus seems to be my best algorithm to use even with the 2% fee(top entry).

And yes, I know all Miners/Algorithms don't have the exact same power needs... I was just feeling lazy and didn't want to check the power for each one.

This is a case where one of the cheap power use meters would give you the information you need.

You could try something like this to measure power consumption:

not sure what you mean by "this" CP Plus NVR, and i don't have familiarity with their products, but you can get a 8 channel NVR from amcrest for under $100, without the hard drive. to give you a reference for whether their price is good or not.

can't speak about the NVR you're asking, since you haven't provided a model number to look anything up about it :)

as long as the fans aren't caked in dust, i wouldn't expect any issues with stability.

if you're concerned about power use, it might be worth it to buy a watt meter, it will count how many watts your thing is using, so you can know. most computers barely use power when they're not being actively used.

You can buy watt meters to get an idea of how much power you are drawing.